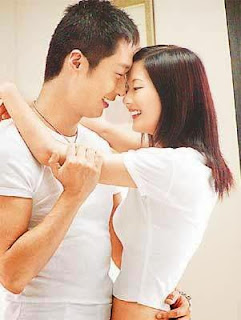 April 25,2003
Mainland China is a hazardous area infected with SARS. However, Steven recently went to Guangzhou to film a commercial without fear. Although it was only a two-day trip, the filming process was tormenting, Steven had to keep washing his face and had to film the commerical in the (artificial) rain. But, this commercial had proved Steven's skin in good condition.

This commerical's production undergoes a serious procedure. The organiser specially invited a Taiwanese commercial director who comes all the way from Japan. The first day of filming took place at the entrance of an exhibition centre in Guangzhou --- a place which was yet to be opened to the public. Two fire engines were also used to create the artificial rain in order to have a romantic ambience. Steven also followed the director's instructions, showing professionalism throughout the filming process.

Steven had to exercise various facial expression. Whenever it's rest time in between filming, the thoughtful filming crew will prepare distilled water for Steven to clean his face.

credit goes to VV in StevenMaDotCom