Steven has a cultured look; there’s an air of gentility to him. When he first broke into the entertainment scene, he was often perceived as someone of a privileged and wealthy background, thus, he was often asked from which overseas university did he graduate from. But in real life, he is nothing like his character Ji Yan Chu (纪彦祖) in Ultra Protection; living in a grand house with servants and housekeeper, or being chauffeured around in a luxurious car. Last month at his Lifestyle fans party, a promotional cum signing event for his new cd, Lifestyle, Steven talked about the real him to this reporter. Someone who grew up in Sham Shui district, a high school graduate, lives with parents, no privileged background or advanced education, no caviar to eat, or Mercedes Benz to ride in; that’s the real Ma Chun Wai.

“During my early days in entertainment, (as in acting) everybody took me to be an overseas graduate from a rich family. What can I say; that’s just my appearance. For the longest time, I didn’t appreciate it at all on how people perceived me; I felt that it would constraint my versatility growth as an actor,” says Steven.

Ma Zai’s portrayal of the character, Ji YanChu received critical acclaim from the viewers. Now, when people see him, they would address him as “Young Master”. (Xiu Ye Jai) As to those who had said Ma Chun Wai would not take up this kind of role, or that he was just acting as himself, how would he respond to that?

“Bowie (co-star) once said this in a TV interview: “He was just acting as himself ma!” How was I acting as myself? When did I become an acerbic person? It’s all acting on my part. I don’t eat caviar, don’t live in such a big house, and have never had a big allowance. But I do have this kind of upper-class friends. And through them, I fleshed out my character; a fastidious rich young man. How to portray him without the viewers finding him annoying? A little too overt, viewers might be turned off, so had to be very meticulous.”

Actually so far, Ma Zai has only acted in four TV series including: Files of Justice IV 1997, DOMD 1998, Healing Hands1 1998, and Ultra Protection 1999. Hitherto, his roles were mainly of loyal and steadfast, simple and honest characters. After the airing of Ultra Protection, many people asked: “How come Ma Chun Wai agree to take up this kind of role?”

“When I acted in Healing Hands, some people commented that I look like a doctor. Now, acting as a rich young man, there are people who said I’m such a baddie. Not only do I spit but also smoke as I paced mindlessly. I hope in the next series, there will be yet another character for me to flex my acting chops. Many producers after watching Ultra Protection would ask Mui Siu Ching (series’ producer) why I agreed to take up the role? She countered with: “Why not?” Now, they know I’m up to any challenges.” As an actor, Ma Zai would like to experience all kinds of different roles, with one exception; no coffin scene.

“Honestly, I simply can’t act out a scene wherein I have to lie down inside a coffin. If you want me to act as a depraved villain or as a cross dresser; fine, no problem. After all, it’s just acting.”

…There are many things in showbiz that are beyond Ma Zai’s comprehension, but he knows all too well the very basic principle underlying his trade which is: artistes must have endurance for a long haul, and they must have a good knowledge of themselves, especially their strengths and weaknesses; otherwise, they will not last long in the industry. Showbiz is not a place for heroes to create current events, but for current events to create heroes. Opportunities abound but one needs to know to appreciate and cherish them.

Lately, he has much to celebrate; besides starting on his first movie soon, his song玫瑰和家明 has just shot up on the 金曲龍虎榜 (Top of the Chart for popular pop songs?) to secure the top spot. He says: “Since debuting, I’ve had already released 5 to 6 albums, but my songs were either 2nd or 3rd on the chart, never 1st. Finally, this time I got my wish. I will celebrate with my friends. Also, I’ve plans to release a mandarin album in the near future.”

Ever since Huan Zhu Ge Ge (HZGG) premiered on ATV, Hong Kong was awash in gege waves, forcing TVB executives to scramble with various strategies to battle this tidal invasion. Ultra Protection was one of their counteracting weapons against HZGG2. However, Ultra Protection was no match for HZ's popularity, and was humiliatingly trounced in the ratings, hovering around 20 odd points in average.

When asked if he had felt pressured by the result, Steven responds candidly: HZ 1 was very well done; whether in its production or in its storyline. The cast also did a good job. And the cinematography was beautifully shot. Even the songs were good and very catchy. Vicki was a good Xiao Yan Zi. As for his own Ultra Protection, (actually its storyline was rather good) but because it premiered in the middle of HZ2’s airing, in which case, the latter naturally had already retained a loyal following, its rating result was acceptable, given the circumstance. Just the fact that it held on to its own viewers and not let them drift away was in itself, remarkable.

Steven in real life has set high standards for himself. Whatever he does, it has to be done well. He says he has a dual personality. During the day under the bright sunlight, he is lively and outgoing. But come nightfall, under the darkened sky, he likes to be alone with his thoughts, quietly meditating on stuff.

In reality, what did this character, Ji Yan Chu bring to you?
“First, household viewers seem to like me. Also, elderly viewers (Ah Ba, Ah Ma) seem to like me, too. Friends would call me up and quip, “How are you? Si Na lady-killer.” I was thrilled by this label. (Tongue in cheek glib) Truly, ‘don’t care much about everlasting, only care that I was once a lady-killer.’ (Playing on the pun don’t care about having an everlasting love, care only that I once was in love.) Honestly, it is but an illusory title! What is more amazing to me was the news from my recording company informing me that the first day order of my cd is already sold out. Of those who bought my albums, 70% of them are si nai and married women.”

Ma Zai says he is happy to accept the label, but just as quickly points out that he is only one of the many with such label. He says modestly: I feel that maybe my ‘lethality’ is not of the potent kind, that’s why viewers find it much easier to accept me.”

Presently, as a singer and as an actor, he has two separate groups of fans of all ages, one for his singing and one for his acting; even the men love him!

“Many male viewers like me too. When I ride a cab, the driver would talk nonstop with me about a series; right from the time I got in until the time I got off. They didn’t even know I am also a singer until then. Once, I went into an electric appliance store to buy an interior antenna. After looking around, I chose a particular one and asked the owner: “Ah Goh, is this a good one?” He said: “Take it home and try it out. If it’s ok, then come back with the payment.” He would not have done this to another customer. Even the policemen when they saw me on the street would quip: “Mr. Ma, out shopping, ah? Where are your bodyguards?” (Referring to his bodyguards in Ultra Protection) These exchanges of pleasantries made me very happy. What’s more, it proved that people have changed their negative opinion of me."

Afterword:
It is in this very series that Steven lost his virgin screen kiss to…ta-da Bowie. And his disgusted reaction after that kiss was hilarious. As he had hoped, Steven had successfully portrayed an immature, spoilt rich brat who can be annoying, into a likable character, occasionally, acting as a comedic relief. His Xiu Ye Zai (Young Master) was very endearing and extremely adorable. Just like his Dr. Joe in Healing Hands 1, Steven held his own against the more seasoned actors; imo, in this series he even stole some scenes from Bowie. 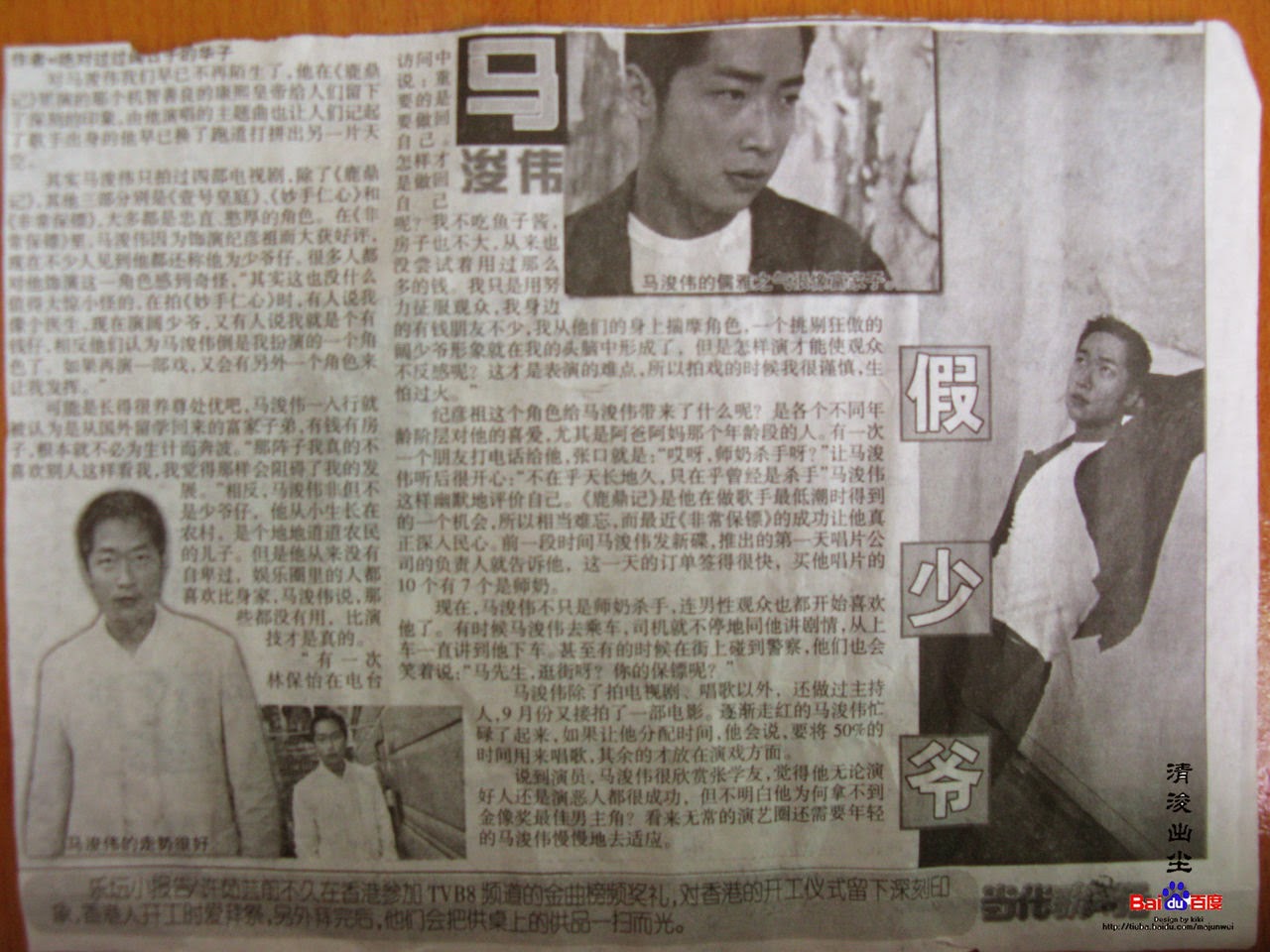