AF repost374 25 October 2007 - 12:26 AM
The Tale of The Prince’s Revenge, 王子复仇记, a stage play co-starring Steven Ma and Sonija Kwok, will stage 6 performances in the Cultural Center on Nov. 22nd through 25th. It held a press conference yesterday at Regal Hong Kong, Causeway Bay. Besides Steven and Sonija attending the function, the other cast members present included Michael Tse, Yang Tian Jin, and Xie Xue Xin.

Steven’s role in the show is Prince Huan. When asked if he feels any pressure during rehearsals, Steven smiles and says: "This character suffers depression, and has some mental problems. Frankly, I, myself have gone through some of those problems, too; so there isn’t much pressure on me. Everybody goes through some mood swings in life. It’s true when immersed in the role, my mood would dip. After rehearsal, it’s not physical fatigue, rather it’s mental exhaustion." (Are you worried you can’t remove yourself from your character?) "All these years of acting, I’ve never being unable to extricate myself. Just that the lines keep repeating in my head. Sometime, I became so mindless from memorizing the lines that I’m totally oblivious to my surrounding. If I really have problems, I will seek out Big Sister Ming". (Lin Jian Ming)

"Actually, what I most worried is the 3 minute sword duel scene with Michael, if not careful, at any moment, could be blinded by the other party." 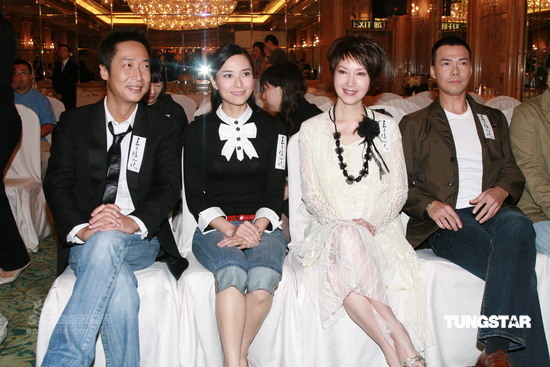