4/17/2013
Audio above if Part 1 and part 2 of Steven's segments combined
Thoroughly enjoyed listening to segment at 29:11 where si-na & popo (grandmas)  call in to gush over Steven.

credit edited audio to 雪韵飘寒 @sm baidu
Source:  RTHK 5th channel 香江暖流 「星星會客室」(Stars Talk) segment.
The whole program lasted 3 hours but Steven only appeared in the last one hour, per above audio. If accessing rthk website, skip the 1st hour, (slide the cursor to the end of 1st hr, the 2nd hr will automatically come on - the program is 3 hours in total w/ news) Steven's segment comes on at 29:49 of the 2nd hour. It continues after the report of weather and other news at 7:00 at the 3rd hour of the program and ends at 12:30 pm.

The above video is just on the latter call-in and Steven saying he is so stressed just hearing Zhan jie's name.
Haha! Steven said he right away felt stressed upon hearing a call-in listener said her name is Zhan Jie, cos that inevitably reminds him of Catherine Tsang.

The last call-in portion was fun to listen to; Steven is so well loved by his elders.  Because this program caters to the older listeners, all the call-in listeners are senior citizens - their names all end with 'jie'. (elder sister) and even "popo" (grandma) haha!

All listeners are full of fulsome praises for Steven - says he is so very leng zai, (some have seen him in person) love his series, miss seeing his series so very, very much, urge him to quickly shoot another so they can see him again, and Steven promises them that he will shoot a series in May. If Steven has had any doubts about filming tvb series, their love for him may have just helped him to decide, even host says tvb should thank these listeners for helping them to persuade Steven to return to tvb.

- A listener who has listened to Steven sing opera with Joyce Koi urges Steven to not only sing pop songs but also Cantonese opera songs cos' she thinks he can sing them really well. That if those charity fund-raisers had invited him to sing opera during the event, the fund raised would definitely have been more. Such praise!

- All praises him "handsome" (leng zai) - the first word many listeners blurt out is "Ni hao leng zai"!

- All say miss him terribly. Please shoot some series so they can see him on tv.

- A listener says she is so mad at why Ci Yat Bo did not fight for Jing Gou, so Steven has to placate her explaining why. But in real life if presented with similar situation, if the woman also loves him, he would fight to be wit her.

- A listener urges Steven to take up a villain role, but then because of his looks may be tough. Steven counters by saying which is why his evilness is all the more chilling because of his guai guai zai, si man look versus his evil deeds. (tn: I've always thought that.  I might have nightmares after watching his scenes of evilness.) 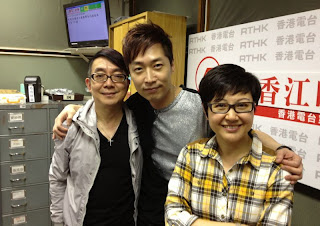