THE stars have finally aligned for Susanna Kwan and Steven Ma who will perform on the same stage for the first time this month at Genting International Convention Centre in First World Hotel, Genting Highlands. Ma, who is popular for roles in TVB series such as Where The Legend Begins, Perish In The Name Of Love and, more recently, Storm In A Cocoon, will mesmerise with his timeless tunes starting from the time when he first broke into the entertainment scene after winning an annual singing competition in Hong Kong. He also holds the record for winning the most number of Favourite Character awards awarded by TVB. 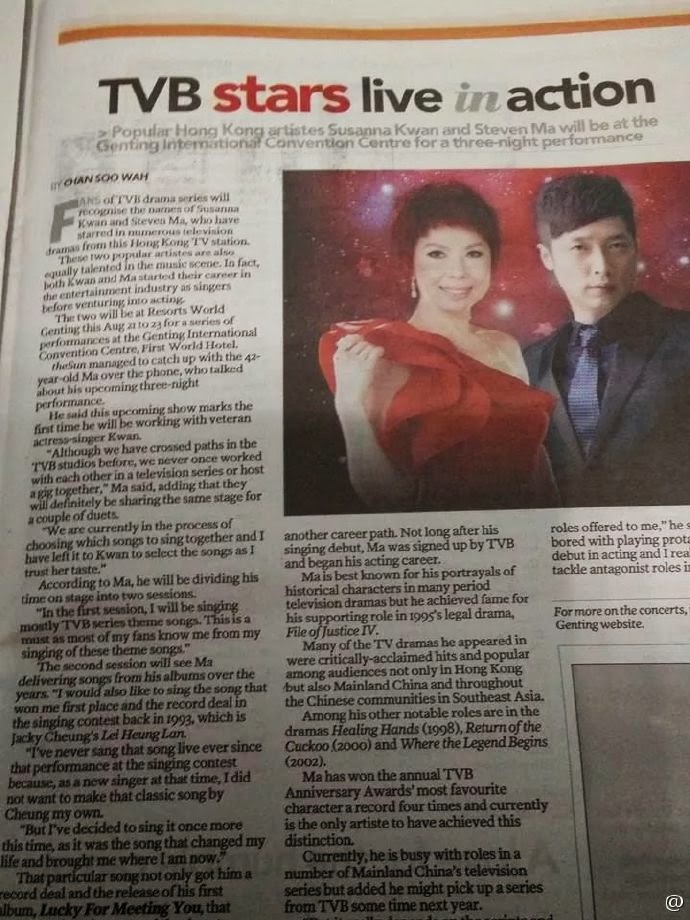 FUN AND INTERESTING
“I have not worked with Susanna before — not on stage or in a drama series. So our performance should be a fun and interesting experience,” Ma says, adding that he will sing a duet with Kwan at the concert. “No doubt the duet will be one of the highlights of the concert. As for the set list, Susanna is still finalising her selections. I will be presenting songs from my previous albums as well as theme songs from the shows I have appeared in.”

Will he be performing Lee Heung Lan, the popular theme song from the action-comedy film, From Beijing With Love? Laughing, Ma says: “All these years I have never been able to sing this song again after performing it for the first time at the singing competition. The reason is that I am afraid I will not be able to give the song its edge the way Jacky Cheung does.” [sic. He has sung the song live  twice in different concerts.)

The song became one of Cheung’s popular hits after Stephen Chow’s character did a rendition of his own in the movie.

THE BEST RECOGNITION
After his debut album, Lucky For Meeting You, in late 1993, Ma quickly went on to become a household name.

But it wasn’t until 1995 — two years after dabbling as both a television host and a singer — that Ma finally found his true calling in acting. His realistic portrayal of Dr Stephen Chan Cheuk-yiu in the fourth instalment of the legal procedural drama, File Of Justice, earned him recognition — he was subsequently cast as the leading man in the series.

Aside from appearances in TVB drama series, Ma works on Mainland China series too. He acted alongside Hu Jun and Charmaine Sheh in the big-budgeted series "Legend Of The Yuan Empire Founder", where he played the Yuan Dynasty court adviser, Liu Bingzhong.

“I want to challenge myself to play different characters and not just good guys who rescue pretty damsels in distress,” he says. “I am tired of playing the same character (good guy) over and over again. For a change, I want to try my hands at playing villains.”

Does that mean playing the bad guy will earn him an award?

“It doesn’t matter anymore to me. My passion is acting and the best compliment may not necessarily be an award or trophy. When I walk on the street and people call me by my characters’ names and tell me how my roles have affected their lives — that’s the best recognition I can get,” he says.

OVERNIGHT SENSATION
Kwan is no stranger here. Known for playing a schemer in Heart Of Greed, she became an overnight sensation and her character subsequently won her My Favourite Female Character at the TVB Anniversary Awards. The series was well-received at home and abroad and a sequel (Moonlight Resonance) followed soon after.

Tickets are priced from RM90-RM300. A 20 per cent discount will be given to the first 500 PS2 ticket holders (applicable to Genting Rewards Card members only). There is also a 20 per cent discount for all GRC members via the Genting Point Redemption for all price scales. Details at www.rwgenting.com or call 03-2718 1118.