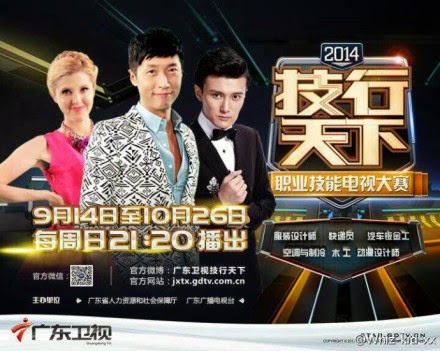 Spoiler/Review: So laughable that a 'tailor' actually won a fashion designing championship over fellow fashion designers. Where were the creativity and fashion style so integral in a fashion show in his work of similar qi pao - just how many creative ways can you style a qi pao?  Though not my fashion style but at least the other fashion designers' clothes were more creative than a line of qi paos. My negativity has nothing to do with Steven's picks being out early in the show but rather with the uninspired fashion, the humdrum stage setup, the dull atmosphere of the show, also, the redundant professionals' commentary segment made this an hour and half show way too long. Furthermore, the identities of this winner and that of the next two episodes' winners have already been exposed along with their photos on weibo the same day of their competition way back in August, so, even that little suspense was gone for me. Truth be told, if not for Steven's involvement I would have skipped this 1st episode and the whole show itself - it's premise and execution are just not my cup of tea. Whereas Steven's Apprentice Chef 2's atmosphere crackled with judges' chemistry, heightened excitement and suspense thru use of music and lighting, this 技行天下's 1st episode fell flat. Hopefully, the 2nd episode is better .

Also, considering the brevity of Steven's screen time, hope this prolonged project of him is truly worth his effort, energy and time put into those past few months since July.  For myself, I would much rather he spent those past three months filming a tv drama series or holding a concert tour in mainland.


My unfavorable view of the show had nothing to do with the dialect as I understand both Cantonese and Mandarin, but rather with the fluff and editing. Besides Steven's scene (even that came across fake), I had no interest whatsover in watching his co-judges' contrived locating of their candidates' workplaces. (especially put off by that blondie's (sorry, can't recall her name) cringeworthy ott acting to ham it up for the camera). Also found the panel of professional analysts' stilted commentary scenes contrived, redundant and extremely boring.

1) Unnecessary fluff: The scenes of judges locating the designers were contrived and scripted. Blondie was awkward to watch with her put-on coyness and effervescence,  and she seemed pretty self-consciousness for being on camera.

2) 30 minutes to churn up a fashionable design to determine semi-finalists? How? As expected, end result produces craft design instead of couture design.

3) safe-crafty-commercial/humdrum designs (as opposed to creative-original-couture designs): Love Steven's comment: "Two of the designs look like sleepwear" lol! Still he cast his vote for her - no choice cos' her rival line of qi pao had zero originality or creativity to speak off.

4) But I do have a good impression of the fashion designers. Their passion for their craft came across loud and clear. The 30 minutes 'craft' fashion designing contest is way too short to determine who is the most creative talented designer as opposed to craft designer, though I was impressed with some of their end products given the time.

I prefer that the scripted early scenes of hapeless judges locating their candidates be replaced with a more indepth interview of the candidates to promote their crafts and talents. Though not original in design, I do like Steven's picks - the 1st choice > the 2nd choice.  Last but not least, Steven did not have much screen time to hold my interest through this one and a half hour long show.