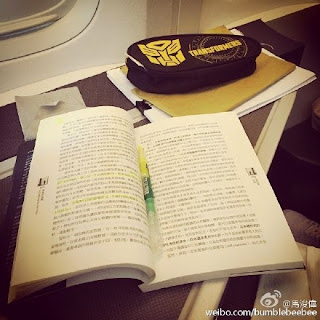 今天 16:03 On flight to Los Angeles, did many things: read book, read script, listened to music, watched two movies - one of which is the biopic, "Big Eyes"; it was really good, highly recommended! P.S. I've arrived safely in San Diego. Tomorrow night is the first band rehearsal. Anticipating.^^

A quintessential workaholic, did everything but rest/sleep! Steven reportedly said he couldn't sleep in an open public place. So, per google, HKG to San Diego airport via LAX (eta: LA international airport) = 16h 20m+, another 50-min drive from SD airport to Harrah's - a long day for him, good that he traveled business class. (pix) P.S. check out his transformers bag. Enlarged pix - the book is "A Challenge for the Actor".  Wonder what his next filming project is and when?
Uploader & or translator: Tamaya at 8:18 AM