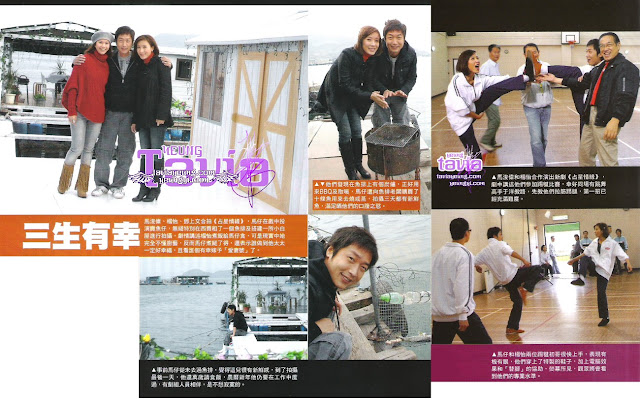 Most Matching Zodiac - Tavia Yeung and Steven Ma (The Stars Of Love)
PLEASE GIVE CREDIT IF REPOSTED. BEWARE OF SPOILERS. THANK YOU.

After Land Of Wealth and Sweetness In The Salt, Tavia Yeung and Steven Ma collaborated again in new series. They filmed a modern love story which talks about zodiac, The Stars Of Love. Steven's role is a steady Capricorn while Tavia's role is a perfectionist Virgo. Unexpectedly, in real life, Tavia Yeung's zodiac is virgo and Capricorn is a zodiac which will affect Steven Ma's attitude after 30 years old. No matter in series or in real life, their zodiac matches each other and no wonder they can collaborate so many times.

Summary of The Stars Of Love
Gan Ngou Lam (Tavia Yeung), who was interested in zodiac, gained a direction of her life from a zodiac game. It turned out that she will meet the most important person in her life. She knew a friend from the zodiac game who was the designer of the zodiac game, Tsim Shing Hou (Michael Tse). At the same time, she had a friend that she knew since childhood and worked as a fishmonger in the market, Chi Yat Bou (Steven Ma). Three of them became good friends soon after.

Ngou Lam fell in love with kind-hearted, Yat Bou. However, because of misunderstandings, Ngou Lam thought that Yat Bou only treated her as sister and therefore, she gave up the intention to be with Yat Bou. Moreover, Ngou Lam and Shing Hou slowly developed feelings towards each other because of work relations and became lovers soon after. In the same time, actually Yat Bou developed feelings towards Ngou Lam all these while. However, it was too pity that he was late to express his feelings towards her. Therefore, Yat Bou had to keep his feelings in his heart.

Different type of Virgo
This series is 3rd collaboration series of Tavia Yeung and Steven Ma. With matching zodiac and full understandability, Tavia said, "Before this, we collaborated in ancient series. This time we tried out on a modern series and the feeling was a bit more relaxing. I don't know why but before this, both of our collaboration in ancient series could not have a happy ending and it was regretful. Hope that this time we can have a happy ending in this modern series."

Tavia Yeung, who is a Virgo girl in series and also in real life said that she was a different type of Virgo. Virgo is a perfectionist, loves clean, and fussy. I also felt myself perfectionist and hope that can do the best for everything but my stage is not until fussy and troublesome. Before I started this series, I did not have thorough understandings towards zodiac. However, after I filmed this series and asked a lot of peoples about zodiac, then only I know that other than sun zodiac, moon zodiac will also affect a person's attitude.

Note : Only Tavia's parts are translated.

Steven's section translated by tamaya
Serious Capricorn
Having once lived in Taiwan, Steven was influenced by its locale astrology vibes, so considerably well-versed in horoscopes. Mazai: "My horoscope is Scorpio, but after age thirty, the influence of a different planetary star will be greater on me. So I feel that my present character is closer to that of a Capricorn. The strengths of Capricorn include being responsible, rational; conversely, their weaknesses are that they tend to over analyze and over cautious, just like my character Chi Yat Bo, who is always slow in action, hence is nicknamed Chi Yat Bo. Because my own personality is very much like my character in the series, I understand him very well. So for this character I donâ€™t have to act much, just be myself. Even though horoscopes can be used quite accurately to analyze a personality, I advise against total belief. Like if you like a person, you don't really care much about horoscopes compatibility. You'll compromise in order to stay together.

blurb:
Steven Ma, Tavia Yeung and Shermon Tang are filming Stars of Love. Mazai portrays a fishmonger. TVB especially rented a fish stall and constructed a white houseboat for its set production. The script requires Tavia to cook for Mazai. But in real life, Tavia does not know how to cook. Conversely, Mazai is a good cook. Mazai jokes that whoever becomes his wife will sure to be happy. Lets see who has the luck to marry to this wife lover.

TN: The Stars of Love = Cupid Stupid
Uploader & or translator: Tamaya at 11:16 AM