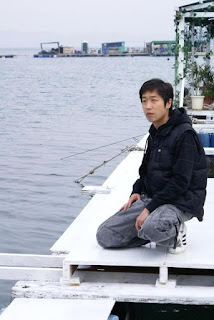 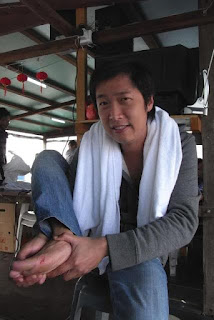 01 February 2009  During CNY, Steven did a shot whereby he had to jump into the water to pick oysters. The water was so frigid that his whole body became numb. He did not even know that he had cut his foot on an oyster shell until he came out of the water and saw his foot bleeding. Only then did he feel pain. The cut was quite deep, too.

During the CNY hols, Steven stayed home and invited some friends to play 打四方城 (?)(does it mean majong') and won quite a bundle of money. (fatt choi) Steven joked his sudden wealth (fatt choy) must be because earlier when cut his foot he saw 'red' (blood) - a good omen to the start of a new year.


Steven Ma gains weight from being Injured
During the Lunar New Year, Steven Ma did not go out for New Year Greetings, he only invited his close friends and relatives to play Mahjong, couldn't believe that just won big bucks against the other 3 players, what great income, he was very happy about this. He said: "How is the New Year so lucky, it must be because I injured myself earlier during filming, a good start!" Turns out that last year Steven was constantly busy filming in the street markets for new series "The Stars of Love". In one of the scenes, it spoke of Steven in the fish stand working and suddenly thought of Tavia Yeung and him. Michael Tse will be the 3rd party between Tavia and Steven, because of sudden feel of sadness, Steven jumps into the sea to relieve his sadness. Steven said: "The weather has been very cold, when going into the water, my whole body gets cold and has not feeling (numb), even when I accidentally kicked an oyster shell, I couldn't feel it. It was not until I came up from the water that the camera man told me that my foot was bleeding, it was then that I realized I kicked an oyster shell that caused a cut. The cut was quite deep, it was bleeding a lot, when I saw that blood, I began to feel pain. For the scene, Steven got himself a body full of scars, today he even got a cut, but he did not mind at all. He believes that men needs more scars to look HOT.

Although Steven did not mind that he got cut, but filming with Kingdom Yuen who was also part of the scene, was very worried about his cut and how bacteria could go in, causing an infection. As Steven saw that his colleagues showed so much care for him, he felt very happy. Steven happily said: "This time I was at very obedient at home resting my injury, I couldn't believe I gained some weight from the break. Maybe its true that in the new year I see "red", so I was so lucky in playing Mahjong.