AF# 1976
Tamaya: So, what do you think the weather was like on that day? On one hand, Shirley was sheathed sexily in her little black tube dress, baring milky shoulders and long legs, on the other hand, Steven (gasped) seemed overly bundled up from top to bottom in his assemble of ski hat, leather jacket, boots and his hole-in-one jeans. Shirley looks ravishing but Steven, WTH was he thinking doled up like that...... Argh! Lol! Quick, someone please go steal Steven's ski-hat and jeans, hide them in a place he will never find.

12/12/09 news:  "A Hong Kong luxury car's owner holds a grand charity rally for "Caring for children: Po Leung Kuk Child Sponsorship Programme campaign rally". For the first time in Hong Kong, 50 Lamborghini cars are being especially assembled for exhibition in honor of this charity rally. The organization has also invited some of the beneficiary children to attend this rally. Furthermore, the said car owner will donate HK$200,000 to Po Leung Kuk Child Sponsorship Programme. Among the attendees are (some HK prominent names) and well-known artistes, Steven Ma and Shirley Yeung. " 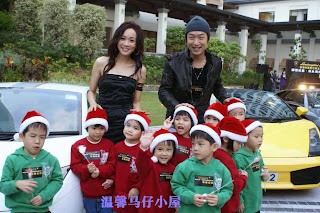 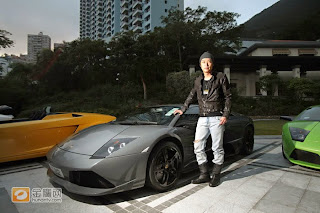 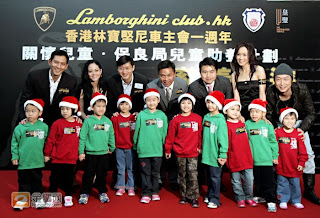 see vid: baidu steven - lamborghini
Transcript of interview:
Commentator: In the rally, Steven Ma disclosed that he will be commenting on the East Asian badminton games, and that he will do his prep work way before then so that he won't look bad. Talk about child sponsorship, I wonder if Ma Zai himself participates in it.

S: Yes, I'm still doing it. But..
R: How long have you been doing it?
S: I guess got to be about 10 years now. (Steven asks manager) about 10 years? (manager: at least 10 years) 10 years or so on.
R: How many?
S: 5
R: All from China?
S: All China. Actually when sponsoring kids, should not have preference but I'm a Chinese. Those that I can sponsor I of course wish to help kids from the poorer regions in China. There are five in all. Some have already graduated. So now will sponsor other kids. Yeah, no need for sponsorship anymore after they grow up. There are two with last name Ma.
R: Especially chosen? (name)
S: No. they did
R: Such a coincidence.
S: Yes, very funny. They will send me stuff for CNY and for all festivals
R: What are you going to be busy at, next?
S: Next? should be around late this month, I'll have a new program.
R: A travel new program
S: No, it's a cooking program
R: You know how to cook?
S: Yes, it's called 大廚出馬 (Top Chef on the move??)
R: Top chef? Should be ordinary chef ba?
S: Top chef. I'll interview different Hong Kong's reputable chefs. The main purpose is to get some tips from them.

more in: steven-ma.org & in baidu steven & steven's warm house
Uploader & or translator: Tamaya at 10:06 AM