Steven: Now that the excitement for the chefs is over, now it's my turn.  That why this segment is called the "Siu Ma (Little Ma) hands-on round". Actually, I'm also very nervous because I need to to do some learning too.This time what did I learn?  Is Lan Chow la min (noodles).  Let's watch it right now.

S: Ok, Chef Lau, why don't you demonstrate right now on how to stretch the noodles.


C: First of all, we place the dough on the counter top.  Then add some food agent to modulate
S: oh this thing, after adding will make the dough more malleable
C: right, not so easily broken, then roll it on top of some flour
S: The hands, is there a standard that they should be this or that way.
C: Oh, this dough has many ways to stretch
S: so if I stretch it this way, is also ok? Grasping its head and tail.
C: yes, another way is put here and stretch it apart
S: you say like this?
C: Right. We do it from the top and then stretch
S: first you flatten it a bit, then when stretched has a more elongated flattened shape
C: use machine to make wet noodles
S: flatter, so the noodles are ready.  Chef, lets put the noodles into the soup


C: For a bowl of cooked noodles, needs about 10 seconds.  But this (cooking) time is 10 times faster than for machine made noodles. (tn:soup stock has old hen, pork bones and ham)

Voiceover: After preparing the season, mix into the soup stock.  Then quickly remove the noodles because too much time may affect the noodles' texture.

C: We usually put the scallion pieces on a soup ladle  because some customers may not like them.

Voiceover: Chef Lau made it seem so easy to make dan dan la min, so how would Ma Zai fare in making his?

S: So from the short clip you all saw me observing the standard method used by the chef to make the noodles.  So, Tang, we'll do it together.
J: Hou! (ok)
S: Do you have confidence?
J: of course
S: Let's get to it right now.
J: I follow you?

S: yes, sprinkle some flour on the counter.  Let's see how thin can we stretch . Let's hear some applause as encouragement, ok?  First stretch, loop it back up.  This way, put two fingers in this loop here.  Stretch again. loop it up again.  Then stretch again and loop it around again on the counter and holding it this way. Aiya! AIYA!

S: Stretching the noodles made us loudly exclaim aiya.  I think they're getting too thin.
J: right
S: Is it ok?  Let's remove the bad ones out so look will look better
J: I have to get rid of many bad ones.
S: Let me remove the thick one first.  But then won't be enough for our judges to sample.
J: can't allow that.
S: Let's do another batch.
J: Ok ok
S: no don't destroy it, make it into a patty dough, put them here first. Let's do the next one. Quick quick, spread some flour

S: Because this dan dan noodles, so has readied many pre-prepared ingredients.  There're hot peppered oil with sesame paste, soya sauce with vinegar.  So, Tang, are you done?
J: still rolling,
S: This is your third round, dai lou,
J: It's ok to fail
S: ok, get the soup ready first.  The noodles are not thick so should be about ready.  Don't want the noodles to be too soft. Ok, hou.  Scallions, we're not going to sprinkle onto the soup because chef said let customers themselves whether to add or not.
J: Ok, let me try one more time.
S:  Mine this one is done.
J: You're very fast.

S: ok?  But just one bowl is not enough to share.   There is this one thin one.  Let me cook that one. Jacky, you said you want thin noodles, right?
Judge: Are you going to cook for each of us?

S: No, just two bowls only.  So each of you can eat 4 strands each.

S: I think in this bowl there are both thick and thin noodles.  So don't worry. Ok, so two bowls will do it.  AH TANG!
J: Hai!  Don't look!
S: It seems like when we were young playing playdoh in art class. Ok, let's go down and taste it together.
J: ok
Voiceover: Steven and Joyce's noodles 80% resemble Chef Lau's.

Hostess: What's your comments? smooth enough?
Audience: very smooth; there are thick and thin but very smooth.
S: No, thick and thin intermix, that's Tang's bowl.
Audience: hot enough, flavorful enough, anyway just delicious.
Audience: the noodles are very spongy,  I believe Ma Zai did this one.
S: So this la min by Ah Tang and me, invite four of you to sample. So how, To Gor?
Judge3:  Truly renowned teacher develops superior student.
S: So Ah Tang and my first time passed muster?
Judge3: Actually truly very good, why?  Because everything has already being prepared by the master. The master got the dough ready, so you only needed to stretch it.   So no reasons why it shouldn't be good. Except that it was soaked too long so a little bit too soft.  The seasoning is also prepared by the master?
S: Yes, everything was.  Those portions have nothing to do with me.
Judge3:  so everything is 100 points
Judge2: Even thought the soup base is ready and the dough is pre-prepared but I really think that his stretching was ok.
Judge1: Yeah, ok
Judge2: Because I pulled those noodles before
Judge1: Tang Tang is good too, also pulled 2 or 3 times.  You have talent
J: Thank you.
Judge2: I admire Ma Zai's learning spirit and innate talent.  He really has the innate talent for cooking
Judge1: He truly has the talent, To Gor.  Because every time he learns a dish he did not get to practice on it. He can't go home to practice but has to cook it immediately.  He has to rely on his accumulated cooking knowledge.
S: Thank you.
Judge3: So just relying on your memory you already did so well, has talent
S: Wah, thank you, To gor! Wah! Ling jie, To Gor, and Jacky these three for giving me such high praises.  Make me very happy.  Ah Tang, so worthwhile for our efforts to stretch these noodles, what is called Ma Tang la noodles. 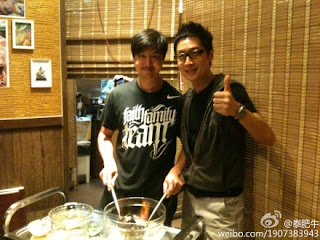 Steven with the one of the contestants chef at @泰肥牛
Seems AC has increased the customers traffic in the restaurant specifically ordering the 2 dishes demonstrated on tv.
Uploader & or translator: Tamaya at 2:54 PM