2011/06/09   { ? 1 mY"   on.cc Steven Ma is recording his Apprentice Chef.  He says candidly that he has used up his friendship cards for his program.  Today he has invited Maggie Cheung to be his special guest.  But later he will return the favor to her by being  her special guest in her own program.  He also reveals he has invited Charmaine Sheh as the finale anchor guest.

For the remaining episodes in AC, Steven will invite Sharon Chan, Liu Xuan, Linda Chung and Cao Chung (Jojo) who has just given birth.  To close the show, he will invite Charmaine Sheh as the finale guest.

TN: There are 13 episodes in all, so far Steven has invited Tavia, Myolie, Fala, Aimee Chan, Joyce Tang, Maggie Cheung, Sharon Chan, Liu Xuan, Linda Chung, Cao Chung and Charmaine Sheh as guests, which made 9 in all, who will be the remaining  3? 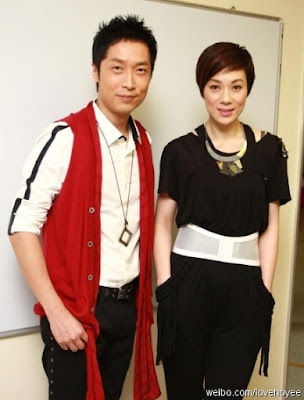 The night before, Steven Ma and Maggie Cheung did a recording for the programme "Apprentice Chef". As the host, Steven laughingly said that he has used up all of his friendship cards, as he has invited all of his friends to attend. Aside from Maggie, there will also be Sharon Chan, Liu Xuan, Linda Chung, JoJo Cho, Charmaine Sheh, etc. afterward. Charmaine will be the guest on the final episode. He said, "JoJo just had a baby; she said that she would be my guest after she gets fit, but I have seen that she has kept well. As for Charmaine, haven't collaborated for a long time...invited her to be my guest on the final episode before she returns to Mainland for work".

Afterward, Steven will appear in the programme "Harbingers of Doom", hosted by Maggie...will reciprocate to repay her. Steven revealed that there are six episodes left to record. In August, [he] will film a new modern series, which is a warm, lighthearted comedy. He said that the character is tailor-made for him. The producer also asked for his opinions beforehand; however, at the moment, [he] doesn't know who he will collaborating with.
Uploader & or translator: Tamaya at 10:00 PM