Only 13 fans remain at Hengdian for day 2 fan visit. Having presented their gifts to Steven on the first day, the remaining brought another gift to present to Steven. They had already thought of this gift the first day but because of time constraint and the wet blanket rain, they decided not to. But today with today's bright, beautiful sunshine and lots of time to spare, they finally bought the watermelon, 4 of them actually. 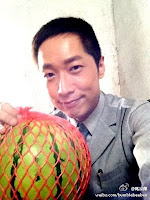 They took a long time to finally find the place that Xiao Qiao told them.  When vik甄  presents the watermelons to Steven, he and crew members all laugh uproariously. Why 4 watermelons? Well, because Steven is the 4th Brother, of course. (make sense? right?) vik甄 and  浚家小龍龍, (a SM fan Hengdian employee) holding the watermelons go inside Steven's resting area. Director Wong is there so Steven introduces them to him.  After that Steven has to shoot a scene so the fans stay back to watch the filming from the sideline.  The scene is about Tang Ting Xuan and his mother being viciously pursued by bad people. There Steven was in his 3-piece suit having to repetitively carrying his 'mom' on his back and running down the lanes not once but several times before the actual take went through. And that was only one take of the scene that consists of several other takes, never mind the ngs takes in between.   The fans see first hand just how tedious and arduous filming is and their hearts go out to Steven seeing his drenched outer vest - can only imagine his drenched dress shirt, while copious sweat run relentlessly down his head.(re below pix)

Later some fan had to leave so now only 11 fans remain.  The fans overhear some crew member commenting that in this heat, just running twice for the take  they were already drenched in sweat never mind Steven having to do that repeatedly.

Steven is such a gentle and loving man to all. Look at how he treats his onscreen mother off screen. Addressing her 'mama' so naturally. When she calls him Teacher ming xing (celebrity), (seems like that's the culture in mainland to address someone teacher (lao shi) out of politeness)  Steven tells her not to address him as such instead but to just call him Ma Zai. In the video, Steven doesn't seem like a celebrity nor does he acts like one. In fact, from the video, Steven seems more like a working, humble actor interacting with common streets people rather than a glamorous celebrity surrounded by adoring fans. Fans said after watching the actual shooting of scenes, they now truly comprehend just how tedious and arduous it is specially under the hot sun. But I am shocked by how thin Steven looks, thought with his more relax schedule he would have gained some much needed weight.

In fact, off screen, to develop the motherly-son feeling on screen, prior to shooting their scene, Steven especially put aside time for them to get to know each other, and discussed how to act out their scene, all the time holding on her hand in his as they took a short walk in the scene site. The actual scene depicts an escape for Tang Ting Xuan and his mother, and when his mother can't walk anymore, he piggyback her.

Walking the lane back and forth, Steven and his onscreen mom rehearse their scene with input from Director Wong. To get themselves into the mood, Steven and mom chat as they stroll down the lane, hand in hand.

--- Tang Ting Xuan and his mom escaping from their pursuers.  In the end, TTX has to piggyback his mom.

And so the filming continues long into the day with much repetitive ng takes. The fans ever curious check out the surrounding and find Steven's and personal belongings: stash of goodies, small electric fan, electronic bugs swat and chair.

During lunch break, having greeted his troupe colleagues, he goes over to chat with his fans. (see videos) Topics include: 1) his hair color 2) fans' lunches erroneously sent to A group 3) about restaurants 4) Steven having no appetite for food during filming hence so thin. baidu sm link  or tudou link 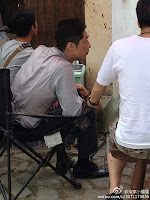 Fan: Did you dye your hair?
Steven:Yes. My hair's naturally quite light in color -- brownish. So dye it dark brown cos' I think my light hair color makes me look less sharp.  Btw, your boxed lunches have been accidentally sent to A group.
Fan: I'm full just seeing you.
Steven: I also don't have much appetite.  That's why getting thinner.
Fan: You're truly too thin now.
Steven:  In this field, it's tough to get fat.  Have really lost a lot weight but not too overly thin.

After chatted for a while with his fans (see videos) Steven leaves to take a much deserving rest inside the artists break room.  And soon after the lunches arrived belatedly and the drinks Xiao Qiao (Steven's female assistant) bought for them.  Steven tells the fans to go ahead and have their lunch cos' he himself does not have the appetite to eat.  Later Steven asks if the food was good. And that the food was especially prepared by the chef employed by his troupe, not a take-out lunch from random restaurant.

In the afternoon, Steven has to film a fighting scene. (where later found out his eye got hurt) He especially wears a waist brace as support to his body but despite that precaution he still gets injured in the scene.

Because Steven was so matter of fact and calm over his eye injury, the fans did not even know about it at the time until he weibo that he had had to miss the day time scene the next day because of his swollen black eye. All they saw at that time was Steven dripping eye drops into his eye and readjusting his contact lens. And though his eye must have hurt he still joked with the crew member and carry on as usual. And of course not forgetting to check his iphone for weibo?

At around 3 or 4 pm, other fans had to leave so only 6 fans remain. Steven's friend who is leaving Hengdian tomorrow drop by to say goodbye to Steven.  They overhead his friend commenting that Steven has lost a lot of weight, and Steven says that so did his weibo fans who have just now seen the uploaded pictures of him by his visiting fan group.  When taking his picture, Steven jestingly tells his fans to not make him look too thin in the picture or else people would think he is sick. And says in this field of occupation, it is tough to get fat.  While chatting, Steven also signs some autographs and poses for photos for his fans.  And his on screen 'mama' comes to join him too. see video

After wrapping up work Steven comes out in his street clothes. signing autographs and talking with fans and his on screen mother. His 'mother' praises him for being such a nice person, a one of a kind celebrity.