Disclaimer: All pix and videos are credited to their owners in various sources: sm baidu, steven-ma.org; and various individual weibos.

Talk about spontaneity and expediency, the fan group visit on 5/26-5/27 to visit Steven on Yuan Yang Pei filming set in Hengdian was set up on a spur of the moment spearheaded by Steven-ma.org and sm baidu.  On May 20, (designated by mainland netizens as 520-I luv you day) on weibo if searched under Steven's name 馬浚偉 was heavily loaded with Steven's pix overtly or stealthily taken by Hengdian tourists during their visit there,  some of which much to their delight, Steven reposted on his weibo to celebrate his own weibo Piggy Family Day.  So enticed by such joyous SM sighting happenstance, steven-ma.org weibo on behalf of the piggies fired up with anticipation, asked Steven if they could visit him at Hengdian, to which 20 minutes or so later Steven replied thus:


And with that warm welcome from Steven, 20 odd fans immediately put aside all obstacles to see him over the weekend; some even traveling for hours on rails, while other flew over in small aircraft; some on their first visit, others on their 5th visit. But all came away from the visit happy and contented, and even now planning to visit Steven in the near future either in Shanghai, Beijing or Shenzhen.  Like some fan has said, once you have seen Steven in person you want to see him again and again, such is Steven's attraction.

Reconstructing the 1st-day fan visit from fans' accounts and pictures. My words are in black while those in brown is sm fan vik甄 @sm baidu, and Steven's words in purple.


On the eve of the fan visit, Steven posted this weibo entry:
5/25 14:30 Looks like it's going to rain tomorrow in Hengdian. So visiting piggies, please be careful on the road. Those who can't come, it's ok, your regards I have already received. 520s (tn: lots of love)

But the rain did not dampen the fans' spirits as they marched as one towards their idol; their spirit high, their hearts tumultuous but all united in their anticipation to meet Steven for the first or nth time. The fans proudly wearing the sm baidu slogan on their clothe.  (tag: SM baidu slogan)


vik甄: Meet 4th Brother, present him the bouquets. First words out his mouth: "You're here again."  We all laugh. I then say to 4th Brother there are many little piggies waiting online, and if I may get a picture of him? He says of course and strikes a pose for the camera.  He looks at the picture taken and says: "Not good. The light today is not good. Hand me the camera." He adjusts the camera and presto here's the photo of him  taken after his tinkling with my camera.

Besides the big bouquets, Steven also receives other gifts some of them unusual like a pair of bitter gourds tied together with a ribbon, and a huge stuffed animal. (tn: What's the matter with that fan giving Steven that huge toy?  Steven is a man and a 40-year-old man at that, for heaven's sake. Moreover, how is he going to bring it home to HK traveling on a plane? And what is he going to do with it later? geez! This is a case whereby ' it's the thought that counts' unequivocally trumps over a big burdensome, cumbersome, useless toy. Sorry for being harsh. ) And of course, the bitter gourd is a play on his Lai Fu's water melon haircut. To view more pix go to fan visit-yyp

Due to 4th Brother's busy schedule and to save time, we all presented our gifts to him. At seeing the gifts, Steven says: "Didn't I say not to buy gifts for me?"  Looking helpless he can only accept little piggies' well-intentioned presents.  The atmosphere is very lively as Steven accepts all his presents graciously. The gourd gift naturally causes quite a stir and much levity. All too soon Steven has to leave for work, and the fans loiter around the scene site waiting for him to get done. 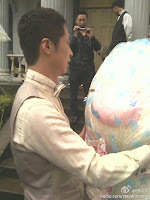 And not too soon, Steven finishes his scenes and comes out dressed in his own everyday clothes, discarding any sign of Tang Xuan Ting on himself. He looks pretty causal and relax in his purple sweater and old grungy blue jeans. All this while because of the rain, Steven's male assistant is right beside/behind him holding up a huge umbrella sheltering him from the rain - guess the lead actor can't afford to get sick. (Steven has once commented during his stint with LOTYEF that he was not used to having assistant(s) catering to his creature comfort. Wonder if he has gotten used to it now?) 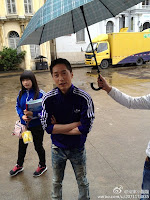 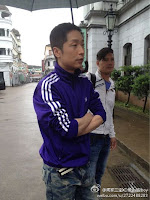 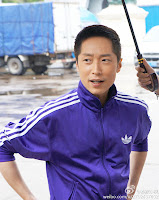 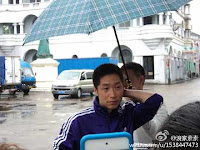 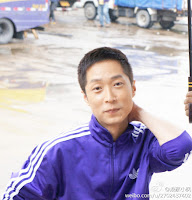 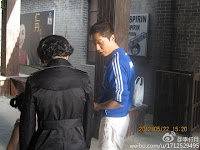 re bottom left two photos:  Can't understand how a 40 year-old man can still look so youthful?

4th Brother informs fans that his next filming venue in the afternoon has changed to 明清宫苑. And so sheltered by the big umbrella Steven chats away with his fans. So chatting, Steven inadvertently blurts out some spoiler of the series but quickly checks himself. He says: "oh, Shouldn't have said that. Just pretend you didn't hear it.  Don't tell others."   We laugh to hear him correct himself. Someone says that purple is a sexy color, and 4th Brother quips: Then you are sexy too cos' you're also wearing purple."  Another fan asks if 4th Brother buys his clothes by the dozen?  I say: "When watching Apprentice Chef, your clothes are all the same style but in different colors."

4th Brother says that he buys clothes the same style in 3 or 5 colors.  Since it's raining 4th Brother suggests we take shelter from it, and pretty soon  he leaves to do some more filming. So the fans while away their time exploring Hengdian and to their unexpected delight they see Yong En and Lai Fu's framed photos displayed at a photography studio window.  As one, they excitedly clicked away their cameras at the display window. 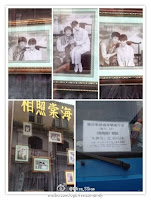 But the rain gets heavily and so to save time, they go to 明清宫苑 venue to find a place to eat while waiting for Steven to finish his scene.  However, it would be quite a while before Steven wraps up his work so they go inside the 明清宫苑 venue, and since Steven is still busy at work  浚家小龍龍, a SM fan who works in Hengdian, takes them to the scene site. And then  vik甄 receives Xiao Qiao's  (SM's female assistant) weibo text msg that they would be arriving there pretty soon. The fans go to the scene site where Steven would act out his scene.  And pretty soon Steven arrives. He has changed his previous purple hoody sweater for a red one. (Probably having gotten wet in the rain?)  The fans come out of the building to greet him. After exchanging some pleasantries Steven goes inside to change into his costumes, which is Tang Ting Xuan.  Steven tells them to go inside the building to get out of the rain and that he would be done soon.  The worker who brought Steven there take the fans to a room where Steven leaves his stuff while at work. 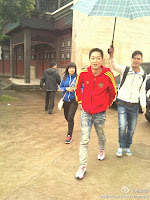 A short while later, Steven comes out attired in Tang Ting Xuan's western suit. He chats with the fans about his upcoming work arrangement and other stuff. To listen to chat view audio steven-ma.or weibo   or to watch the video watch tudou video  (password- 19711026)

Salient points:-
Steven will attend Shanghai Film Festival in June 12 or 13.
He will film a mainland modern tv series in Shenzhen in September.
He will film a tv series that he writes, will direct and act in with a HK actress in Beijing  in February
Yuan Yang Pei will wrap up production July and probably will air in the 4 main more popular satellite tv stations.

From an exclusive fans chat with Steven video, before is the Steven and fans's paraphrased transcript:
S: Right, I wrote the script all by myself, the Beijing one.  Should be as scriptwriter, director and actor.  Won't sing the theme song for Yuan Yang Pei because even before I signed the contract with them, they had already recorded the song.  Will try to sing the themesongs for the latter two.

F: Can you reveal who the leading actress for the upcoming series?

S: For now, will keep that under wraps. For for sure the troupe will get someone who has acting chops.

S:  hmm,  basically it's a story between a man and a woman.  The filming will get done within 3 months. 30 episodes.

F: Who's the leading lady?

S: Can't reveal yet. Whom would you like to be?

S: Let's put the Hong Kong actresses aside.  HK actresses will sure to have a chance to collaborate with them in the future.

F: Mainland actresses? We seldom watch mainland tv series. We only watch yours only ma.

Always has sad ending with Tavia but happy ending with Linda and what's more always got married and always have a daughter, never a son. A fan says Steven's Fat Dat Gor looks good in his black frame spectacles and Steven says the spectacles are similar to what he usually wears in real life.  And then Steven notices that some fans have them on now. The fans confessed that their black frame glasses are actually with fake glasses. (huh?)

S: The upcoming series in September will collaborate with a mainland actress.

S: For sure, you all will be familiar with her.  But the one in next February, the female lead may be from Hong Kong. Still in coordination right now because of scheduling. Can't be just my own wistful thinking, would have see the other party's schedule. ... but first will do well the September series first (in Shenzhen)

Talk about how the fans had to travel far to visit him in Hengdian. Some had to fly over for the visit. Some traveled for many hours like 15 or to get there.

Yuan Yang Pei may most probably air this year. But Steven is not sure on what tv station(s), since the management did not reveal he did not want to pry. But the possibility of it airing in one of the 4 big mainland tv stations is high.


And then they take group pictures. And after the short chat Steven leaves for work while they stay around the place waiting for Steven to get done with work. Every now and then Steven would pop up to see how they are doing.  Sitting outside the scene site, we heard the constant sounds of gun shots.  Soon the sky gets darker but Steven still has more scenes to shoot so he tells Xiao Qiao to tell them to return to their hotel (s) get some dinner and rest. So as not to let Steven worry about them waiting for him, the fans leave reluctantly.  They have just left 明清宫苑 venue when Xiao Qiao weibo text msg vik甄  to ascertain how many of them will stay back in Hengdian through afternoon because since Steven didn't have time to treat them to a meal today due to work  he wants to treat us lunch on the filming scene site the next day.  But he needs  to know the number of people coming so that he can place a preorder for the special lunches.  These  lunches are differently prepared from the daily fare prepared for the YYP troupe.  On weibo, a fan commented that the lunch was really delicious and that YYP troupe members were lucky to have some delicious food until some knowing fan told her that their lunch was specially ordered by Steven and that it was not the daily fare. And thus the 1st day of group fan visit ended. 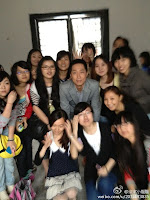 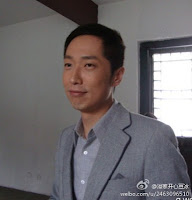