UPDATED: Steven Ma To Film a HK series next year 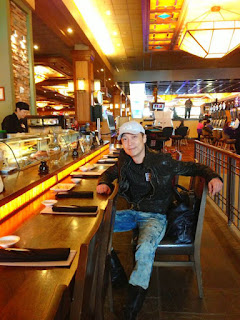 Yesterday Steven Ma was at an event in the US.  When asked about TVB inviting him back to the nest to film a series, he said: "Actually all along there have always been various tv stations contacting me.  Indeed, I've plans to return to Hong Kong in the mid-year to film a Hong Kong tv series but as to which tv station I will end up with is not convenient to reveal just yet.

source: Innews.mingpao.com
Same news from Macao Daily
Steven Ma Refuses to return to the nest to film series.
Recently, Steven Ma flew over to Los Angeles, US, for his two Christmas concerts.  Earlier, it was predictable that the Yellowstone National Park volcano in the US would explode, when asked if his family was worried about him going to the US, Steven said: Both my family and I are neither worried nor believe. (in doomsday prediction)  True that before my trip, some friends did ask me how come I still go to the US, how come I'm not nervous?  Of course, I don't believe the doomsday prediction. I wasn't worried at all because if natural catastrophe were to happen, people can't escape no matter where they are. But reality is such that we must protect and take good care of our earth."

Lately, a weekly tabloid reported that TVB executive, Catherine Tsang, has plans to produce a new series, and that she has invited Steven to return to the nest to film the series.  When asked about the rumor, Steven says: "I did not hear about my filming this series.  Return to TVB? Actually all along there have always been various tv stations contacting me, and indeed I have plans to return to HK to shoot a tv series. But as to which tv station I will end up collaborating with, it is not convenient to disclose just yet.  Tsang Jie is my benefactor and TVB is my maternal home, we maintain a good relationship.  When all is set and confirmed, I will duly reveal my plans to the public, until then, thank you for everybody's concern."

Tamaya:
There, straight from the horse's mouth. Steven knows nothing of the reported series. The rumor is probably just TVB using both Kevin and Steven to publicize the series.

Anyway, in past interview videos Steven always said he will shoot a series in HK next year but the news write-up always replaced his "HK" tv series to "TVB" series.

From observing Steven and Miu Siu Ching's weibo interaction, there is a higher chance that he will collaborate with MSC than TVB.  Because of his loyalty to TVB, Steven most probably will not collaborate with HKTV anytime soon.
Uploader & or translator: Tamaya at 4:10 PM