Steven Ma and Peggy Liu at their LA press conference 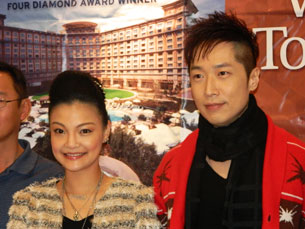 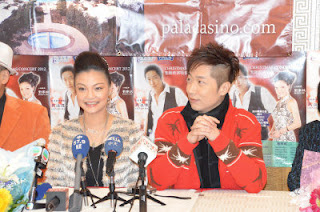 Gist: Steven Ma and Peggy Liu will hold a Christmas concert in Pala Casino and Spa resort concert on the 12/22nd at 7 pm.  Like Steven, Peggy Liu is also a champion of a singing competition - she won the Taiwan Teresa Teng imitator competition in Taiwan.

Transcript on Steven's portion only.

In the press conference, Steven says he had been diligently practicing singing Mandarin songs for quite a while now, so even if audience requested songs impromptu he is well prepared to deliver.  Besides his own themesongs and Cantonese songs, he will also sing some unlikely Mandarin songs that people would be surprised he knew, and what's more, can sing them too.

Steven sings "Happenstance (偶然)" in a cappella.
Steven has often mentioned this poem Happenstance by Xu Zhimo as one of his favorite Chinese poems. Hong Kong singer, Chelsea Chan, later composed the music to this poem, and sang it as the theme song for her movie. link

In another news report video: link to www.ctitv.com.tw
Uploader & or translator: Tamaya at 8:45 AM