CORRECTION: He said: "For the first half of the year, I'll be in mainland filming a MOVIE.

Yay! Steven will be filming a movie. (I mistaken 'movie' for a tv series. ) 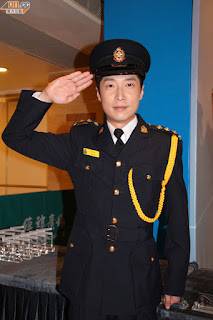 Artiste Steven Ma attended a safety patrol event today. It is said that TVB executive Catherine Tsang is persuading Steven to return to film a series in May.  Steven admitted that the two of them have been talking but at this time he has not decided yet. "Zan Jie (Catherine Tsang) is my 'sifu' (master). My first choice would be to talk with 'sifu'.  But have not talked about the contract details.  Hopefully will do that before Chinese New Year."  (Will return?)  "I've many options.  Hong Kong or mainland, there are people wanting me to film series."  When asked under what conditions will he return, he said: "I'm not pursuing money, most important are the script and partner. (Who would make you want to return?) "Would also like to work with Fala Chen or Tavia"

TN: "also" meaning Steven must have mentioned other actresses besides Fala and Tavia.  Reporter put words in Steven's mouth, in a much later separate tv interview Steven clarified that he did not especially pick Tavia or any of his sisters for that matter as his return tv series female lead.

So boring to always see Steven partnering his 3 sisters. Can we have some new partnerships with other big fadans, please, pretty please?  But then, TVB has no more big fadans left.  Just can't get myself excited by this news of Steven returning to TVB. Probably just the same old same old TVB series with Uncle Choi and one of his sisters.  Haiz! I'm more excited to watch his performance in LOTYEF. 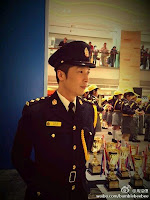 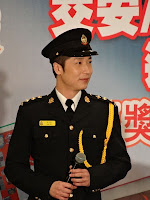 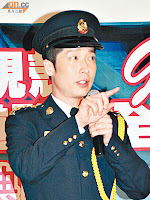 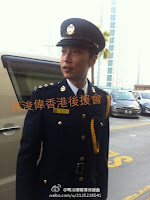 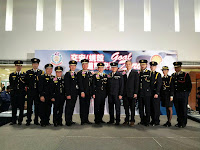 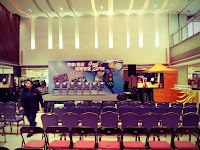 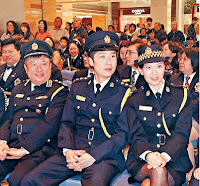 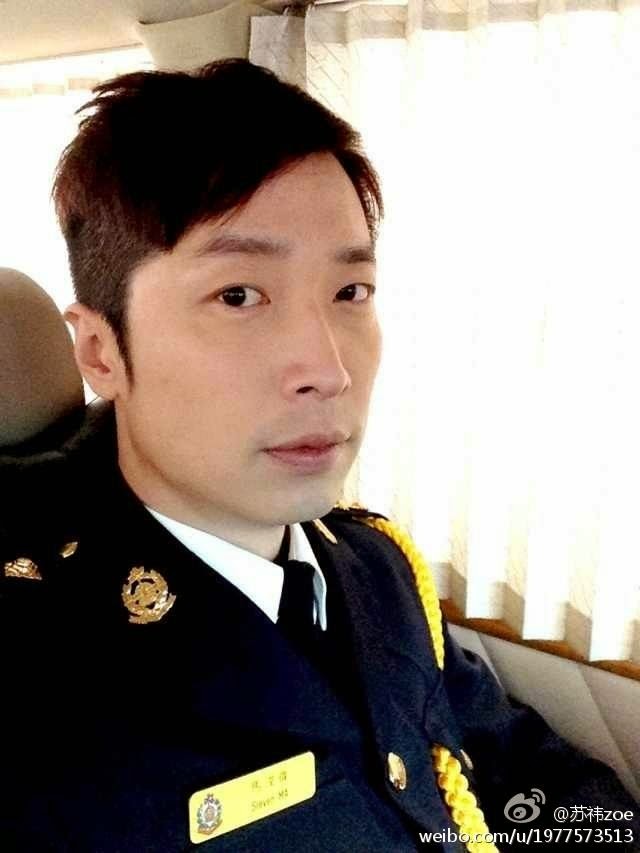 sources credit as labeled.
~~ Below are other news articles reported on the same event~~~

Yesterday, artiste Steven Ma clad in a patrol safety uniform regalia with three stars attended a patrol safety ceremony. Earlier on, reportedly, TVB executive Catherine Tsang admitted to have asked Steven a year ago to film a TVB series.  Steven said:  "Actually, a year ago Zan Jeh (Catherine Tsang) had already asked me but because at the time I had to film Legend of the Yuan Empire Founder《建元风雲》and Yuan Yang Pei《鸳鸯佩》plus there were many stage performances to attend to, I did not have time to sit down and talk with her."

When asked if it was the ancient drama series Cold Mountain and Hidden Dragon 《寒山潜龙》,  Steven said: "The contract details have yet to be discussed. No need for everybody to speculate too much. When everything has been finalized I'll announce it in due time."  (Will work with Charmaine Sheh?) Still the same answer - the formal contract talk has not started yet, so truly don't know.  For now, it's premature to say anything.  Anyway, any good artistes I'd want to work with them. My present attitude towards filming series is this: doesn't matter where I film the series; any good artists I'd be happy to work with them; and I want to continue to learn and grow."

Steven revealed that he is presently gathering new songs, brushing up on his singing and composing songs.  He said: "For the first half of the year, I'll be in mainland filming a movie, for the latter half of the year I'll spread my time between mainland and Hong Kong, but in between I'll keep aside 1/3 or 1/4 of my time for music because I love singing on stage."

Edited with The Sun
When asked if he had any interest to join HKTV (CTI) with its fresh drama themes? Steven said: "If want to, can film that any where."  (Support issue of new licenses?) I understand TVB's stance, and also Ricky Wong's proaction .   I hope for a healthy competition. Even ATV I wish them well, too.

Other news report:
(Has Ricky Wong approach you too?) We have been in contact but until I make a decision, I'm in a sensitive position.