Answering Catherine Tsang's Summon, Steven Ma is Confirmed to Return to Nest (TVB) in May to shoot a series.
马浚伟确定回巢TVB 五月拍新剧为恩师曾励珍効命
2013-01-06 09:26:18 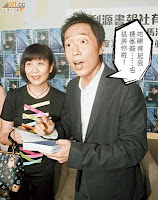 The two TVB executives, Catherine Tsang and Virginia Lok, continue frenziedly to look for trusted allies to fortify their power. Incidentally, there was a recent rumor that Ms. Lok's prized general, Raymond Lam, was so disheartened he wants to retire from showbiz, and that Tsang seeing this opportunity promptly and successfully got Dayo wong and Charmaine Sheh to return to nest to shoot a series, and that allegedly her ‘prized general’, Steven Ma, is also confirmed to return to TVB in May to render his service to his ‘mentor’, Catherine Tsang.

Earlier, during the anniversary awards season, both Catherine Tsang and Virginia Lok diligently rallied votes for their respective ‘prized general’, in the end, Tsang’s prized general, Wayne Lai, defeated Raymond Lam to become a three time tv king winner. Allegedly, so disheartened by his loss Raymond Lam had wanted to retire from entertainment.  Meanwhile, Ms. Lok’s second prized general, Kevin Cheng, is vigorously digging gold up in the north and has no intention of returning to nest any time soon. Seizing this opportunity, Tsang set out to get her people to return such as former producers Tsui Ching Hong (徐正康) and Lee Yim Fong (李艷芳), and artists Charmaine Sheh and Dayo Wong are confirmed to return to nest. Another Tsang’s prized general, Steven Ma, who previously terminated early his tvb management contract in late February last year due to discord with the TVB artists management department. Allegedly after the contract was terminated, Tsang and another TVB executive, Au Wai Lam, immediately tried to convince Steven to sign a per series contract with them but at the time Steven was already participating in the mainland series, ‘The Legend of the Yuan Dynasty Founder’ so he had choice but to decline. Last September,  Tsang personally looked up Steven to shoot a 30 episode series but because of schedule conflict he again declined.

Although Steven’s contract is still under negotiation, but Tsang has already verbally approved to have him returned to TVB in May to shoot Producer Leung Choi Yuen’s new series. To show her sincerity, Tsang personally discussed the contract terms and conditions with Steven. Yesterday, over the phone, Tsang admitted that Steven is coming back: "A year ago I had already asked him to return lah!” In his phone interview Steven said candidly: “Zan Jeh has always been in touch with me. But at this moment, I cannot promise anything just yet because there are still many details to finalize. Anyway, before Chinese New Year, I'll have a more definite answer.”

On an aside, Ricky Wong, who has been trying to get Steven to join them since the first day of the previous Chinese New Year, had invited Steven to join their CTI’s (HKTV) recent promotional event but because of his awkward position Steven declined to attend.