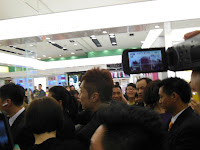 Steven is a head above the crowd.

March 8th 2013 4 pm - 5pm
The Skin is the Proof promo - 5 contestants deemed having best skin would be awarded with SK-II prizes. At this day of Women's Day (Mar 8th), SK-II especially invited Steven Ma to participate in their skin care promo in the Guangzhou departmental store, Grand Buy  (广百天河中怡店). Not sure if he is the SK-II spokesperson or not.

Some weiboans said they waited 2 hours ahead but there was already a big crowd.  As evinced by the photos and words of those who attended, the turnout and response were huge. Happy for Steven - very gratifying to see such a warm and enthusiastic welcome.  He has reposted many of the pictures uploaded on weibo.

As usual, weiboans praised Steven's good looks and his good skin. All said he is so much, much more handsome in person than on screen or in print.  They said crowd was so packed they could hardly move to get close to Steven. "So unbelievable len jai (handsome)" (靓仔到无得顶吖)

17:08 +18:29 weibo: So crowded. Real person so len jai (handsome), skin is so fair and flawless and fine pored. So gentlemanly and stylish. How come real person is so much, much more handsome than on tv? Look even better in my video recording. So close, I could reach out and touch his face. There was this one moment I had this impulse to touch his face.  So worth waiting 2 hours or more. I'm still so excited.(condensed paraphrase)

Below are just some of the clearer pix posted on weibo. Lots more on weibo. 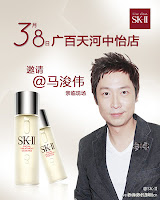 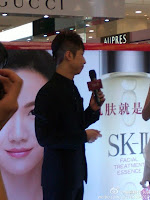 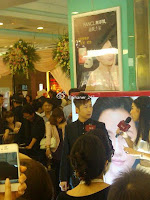 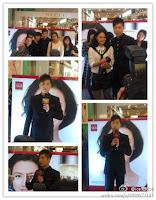 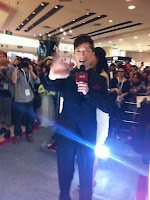 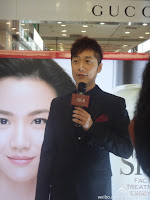 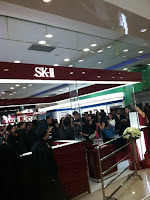 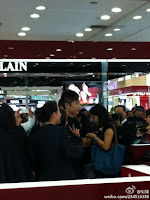 Apparently, besides Steven, the departmental store had also invited other celebrities and handsome unknown male models to promote its other counters like Kate Tsui for lingerie department, and Vincent Wong etc as guests to help celebrate its Grand Buy's Night event. Truly a celebrity filled, big promotion day for Grand Buy's night event.