【on.cc 東方互動 專訊】2013-4-17 During his interview at a radio station, Steven Ma reveals that TVB has prepared for his return to TVB to shoot a tv series, and that yesterday he discussed the details with TVB Director of Production Department, Catherine Tsang.

Furthermore, he said when he got up from bed this morning he heard the news that Sita Chan  (陳僖儀) has passed away.  He feels that life is so unpredictable, plus all the recent news on people dying and being injured, Steven hopes that artistes can help promote more positive energy.


eta: pix surreptitiously taken by the weibo uploaded. She said Steven is much more handsome in person than on screen.  credit as labeled.  For me, when I saw Steven in person, it is not so much Steven looks better in person but that he is real, filled with life's energy and vitality, and very in your face presence - truly a very attractive man to behold. 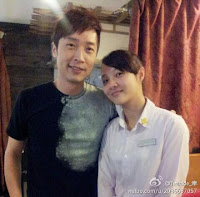