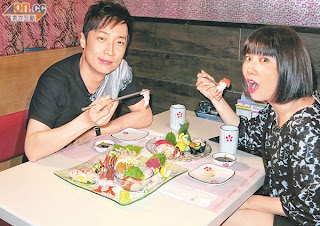 The oriental daily write-up on Steven's 4/17/2013 ontv.cc interview with Angela 俞詠文. Wah! Took so long for the interview to appear on video and newspapers.

Steven Ma was on Entertainment onShow hosted by Angela Yu and spoke about the reason for his comeback into the music industry. It turns out Steven debuted as a singer 20 years ago. Back then he even won the "Chik Chak 903 Male Newcomer (Silver)" award. When Angela asked why did he withdraw from the music scene? He disclosed the "mystery" behind the newcomer award he won. He said: "Back then there were only two male newcomers, I was one of them and the other was Kevin Cheng. I got the silver award out of luck!" Asked if he's making a comeback this year to celebrate his 'discontinuous' 10 years in the music industry? Steven said: "I'm not launching this album this year (2013) because I had one in 1993 and 2003, nor is it for my 20th anniversary in showbiz. Actually it is because I decided that this is the right time and coincidentally there is an investor interested."

In the past year, Steven has been actively working in Mainland. He once said he can buy a mansion just by shooting 1.5 series. Steven smiled and expressed that is a joke. This year he's not launching an album because of money, "It is because I enjoy singing."

Steven's new plug Tacit (心照) is a song about friendship. The inspiration came from his interaction with his group of athlete friends. He said: "In the past few years, aside from shooting TV series, I've also started playing badminton, so I met many athlete friends. In fact, the athletes have one characteristic, that is they are very straightforward. They never over think and have simple thoughts, so I enjoy being with them."

Steven is returning to TVB soon to shoot a new series with his 'god-sister' Tavia Yeung and 'second brother' Evergreen Mak. When speaking of Tavia being the female lead in one of his MVs 10 years ago, Steven said: "I had no impression on her at all. I didn't know she was Tavia Yeung." Later, the two collaborated in several series and became good friends and god-siblings.