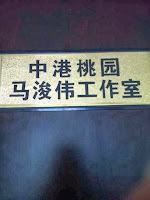 2013-12-8 中港桃園-Steven Ma Production Studio in Beijing is established! In the future, many plans many challenges, hope everything is smooth sailing, also hope all my friends will show support! My greatest gratitude to Huang Hong of 中港桃園, studio's new colleagues, Hong Kong Siu Ma Studio staff; thank you everybody! Let's all work hard together in the future! Praise the Lord!


中港桃園 is a 2012-12-11 newly registered 1 billion rmb mainland television & media company helmed by chairman Huang Hong, and located in Beijing.  Mr. Huang said that the company will invest 1 billion rmb to develop a 2000 acre film production set base in 蜀南竹海 for filming purposes and as a tourist attraction.  The construction will commence in 2013, and the set will be in use by 2015.  source 2012-12-12 news

Follow-up 2013-Aug-7 news  link2 link1 on the company's plan to commence the construction of the production set in 蜀南竹海. As reported in the 2012 news, 中港桃園 company did indeed follow through with its 4-year-plan to invest in a 2000 acre of land in 蜀南竹海 as a filming production base and as a tourist attraction. (similar to Hengdian?)  In 2013 August 6, the company signed a 1 billion investment contract with the Sichuan Yibin County Government for that very film production set base purpose.

Anyway, congratulations to Steven on his newest venture. Wishing Steven good luck, smooth sailing and prosperity in all his enterprises. Hope his newest venture will imbue in him a deep sense of accomplishment and satisfaction.   Swarm with work, no wonder Steven has neglected his weibo recently.


Not being a wet blanket but I recall Steven's past experience with another mainland film production company not so long ago, and how their collaboration did not turn out well.  Hope this collaboration produces better results for Steven.
Uploader & or translator: Tamaya at 1:01 PM