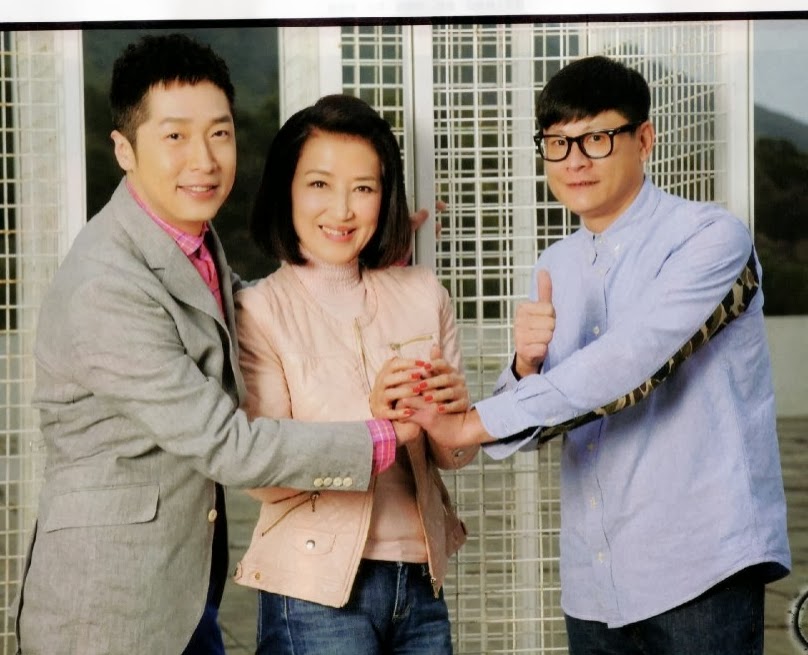 Steven Ma, Helen Ma and Lam King Kong (林敬剛), these three seemingly very different people are actually very similar in character, especially in their work ethics.  Their passion for acting and their maturation backgrounds make them value an “actor’s ethics”; towards indifferent actors, whether lead or temp, they will indiscriminately reproached them for their misconduct. Conversely, towards earnest actors they encountered they show appreciation; for instance like Linda Chung, Fala Chen amd Tavia Yeung after respective collaborations with Steven all became his “younger sisters” because of their professional and enthusiastic attitudes towards their work.

Steven’s affinity with Helen ma came out of their numerous mother-son relationships in their series. However, Steven and King Kong actually started off on the wrong foot with mutual dislike of each other. It was only later when their mutual dislike gradually turned to mutual appreciation, thereafter becoming bosom pals.

Helen: Thereafter we've collaborated in many other series such as: “The Journey of Life”, “Safeguards”, “The Life and Times of a Sentinel” etc.. plus we often acted as mother and son in the series.

Lam: I grew up watching Helen ma’s tv series. I became good friends with Steven in “Where the Legend Begins”.  Before that we knew each other but only casually as colleagues.

Steven: I once thought that King Kong was very bossy; very unlikable. I didn't want to have anything to do with him at all. But later when we filmed WTLB, I noticed that he was always puncture to work and also always well-prepared for his work. I appreciated those traits in him.

Lam: Once we started talking we found out we both grew up in Shek Kip Mei (石硤尾) public housing. The more we chatted the more we hit it off, and before long we became good friends.

Helen: If we work in the same series we always eat together after work. When production is done, Steven likes to treat everybody to a production wrap-up celebration dinner.  And if the series ratings are good he would also treat everybody to dinner.  He is very generous to other people; also he truly cherishes the two months of filming a series together.

Lam: Like last year August while filming “Storm in a Cocoon” at Foshan, one night Steven and I after dinner went to have a drink and chat when he suddenly found out that some martial arts instructors from the north (mainland) would be leaving the set the next day.  Even though at the time they were at another place having late night snacks Steven immediately hurried over there to drink with them as a thank you gesture for their help.  Actually we were together for ten days or so, but he still cherished their work relationship.

Steven: During that duration the daily temperatures were hovering 30 + Celsius, they had to do many action scenes, and also be my stunt double; very grueling. So, must thank them for their help.

Lam: That period was truly very tough ah! Sometimes when shooting outdoor scenes, Helen ma stood by my side and I would fan her to cool her down.  Because she could only take care of shading herself from the sun but unable to fan herself.

Helen: Because of the heat, we all chipped in money to buy cold sodas daily to cool down.

Steven: Sometimes couldn't just depend on cold sodas to cool down so when I knew there would be an outdoor scene shoot on a certain day, the night before, during dinner I would prepay the restaurant owner to make some herbal tea such as “ha gu chao” or “turnips & red carrots soup, stuff like that (tn: food/herbs with cooling properties) for the production troupe.

Helen: Steven knows how to take care of people, and  he's also a well-mannered person.  He would always greet me daily as Helen ma (媽) but then many colleagues also called me Helen ma (媽)(Chinese pun: her surname Ma (馬)rhymes with mama(媽))

----Updated--- Feb 9 2014
As Steven’s ‘mommy’ and ‘brother’, respectively, plus the fact that Helen is already a grandmother and King Kong has been a dad two years ago, they are naturally very concern of Steven’s biggest event in life (marriage) and so they are always admonishing him.

Steven: Because in “The Link of Temptations”, Johnson Lee and I portrayed Helen ma’s sons. She tells Johnson not to have too many romantic rumors but to me she tells me to have more romantic rumors.   Sometimes she would go this roundabout route and ask me: “How have you been lately? As person, don’t be too unyielding lo.” And then, go for the kill: “Wei, time for you to get married!”

Lam: You too? I also always said that to Steven. Sometimes I said to him: Chew Chao choleric man (潮州怒漢) don’t be such a chauvinist male. You can’t find a girlfriend that way.”

Helen: He wants his girlfriend to be very appreciative of him.  Must listen attentively to what he says. It’s fine at first but after a long while, will find him quite nagging lo.

Steven: I disagree that is the case wo.  You all say I’m a chauvinist male, that's why I not only take care of my girlfriend and family members; it's just that I'm so used to taking care of people.

Helen: Anyway, when he talks you must listen lo.

Steven: What I said make sense.

Lam: Sometimes I also asked him: “How are you, and how's that 'certain person'?”

Lam: Steven does not tell me much about his love relationship.  The conversation between us men is terse.  I‘ll only say this to him: “Don’t be a male chauvinist ”. (大男人) And he immediately feels the concern from this brother of his.  Towards his love relationship I never probed.

Where there are people there will be gossips.  Steven, Helen ma and King Kong all truly believe that “those who tell you a gossip tidbit are themselves  gossip mongers.”; they truly disdain people who purposefully spread gossips and rumors everywhere.

Steven: Our genuine friendship is that if one day I tell them that someone is bullying me, they will not blindly confront that person but will first help me analyze the situation. If it is truly someone’s fault they will unhesitatingly stand up for me.  There’s this one time whereby someone mistreated King Kong and when I saw that person I directly asked him: “Why did you treat King Kong that way?”

Helen: With Steven and King Kong, I’ll speak bluntly.  Like how I advise Steven not to be too “straightforward” to avoid offending people.  I tell King King if he cherishes his daughter he should quit smoking.  I’ll not because of our close friendship purposely overlook the situation and tolerate their flaws.

Lam: Actually, Steven’s  ‘straight' ’ talks are mostly for me.  He usually does not speak so straightforwardly to other people.

Steven: Since entering this industry I dare to say that I have never cheated anybody, never exploited anybody, and definitely never stabbed anybody on his/her back.  Sometimes there are rumors like maybe someone would say something bad about King Kong, I knew that person was just stirring up gossip, so one ear in one ear out.  If I had doubts I would directly ask King Kong for verification.

Lam: If some people talk bad about Steven to me, I immediately stop them:  “Steven and I are good friends. Wait for me to leave, then continue.”  Because I worry I might confront them after listening.

Helen: I also don’t listen to people gossiping about my friends because I don’t want to rebut after listening.

Lam: Two phrases: “Those who tell you gossips; they are the gossip mongers.”

Steven:  That’s so true. So, whenever a person wanting to talk about someone behind his/her back to me,  I’ll tell that person to stop; unless you dare to say the same words in his/her presence.  I feel that as a person one should have this kind of open and fair integrity; only then can have true friends.

Many people misled by Steven’s outer appearance thought that he is a pliant and accommodating Mr. Nice Guy but in actuality Steven is someone who chooses the good and adheres to it. (擇善固執) and it turns out that Helen ma and King Kong are also this kind of righteous friends.

Helen: Steven is honest and upfront with people, but not everybody can accept that.  However, I’m on his side like for instance when we have to film an emotion scene. Everybody goes inside the studio to quietly build up the necessary emotion, if at this time some people talk and laugh, Steven would speak up:  “We are going to shoot an emotion scene, can you all please keep it down?”

Steven: I won’t be impolite but I will be very firm. Because I feel that we all need to respect each and every scene.  If some people feel they can’t be serious with their scripts, or be serious in shooting a scene well, or when inside the studio still want to play with their cellphones, then they should not be an actor.

Lam: Steven is not someone who just randomly faults everything; basically he only dislikes actors who do not take their work seriously.

Steven: It's just that I feel punctuality and taking your work seriously should be a must.  Like you two have gone through the Shaw era, the radio broadcasting era, were they not that way? When I filmed "File of Justice",  Bobby Ouyang, Lawrence Ng and Bowie Lam, all these main leads, they all took their scripts seriously so that when the camera rolled often it only took one take to be ok.  At the time even when I had only one speaking line I still stayed back in the studio to observe other people's acting. That was how I got my training. Presently, when I filmed a mainland tv series, the director sometimes would find another person to take my place for lighting adjusting but I always insisted on doing the lighting with the lighting technician.  And to think that there were actually people praising me for that. But really that’s how it should be.  People have different heights, different facial contours, even the skin colors are different, if use a body double how can the lighting effect be accurate?  When I film a mainland tv series, I rely on my work experiences and training in TVB. They (mainland people) are all very appreciative.

Helen: During the Shaw era we followed Mr. Shaw to shoot outdoor scenes.  Shaw Lo Ban always arrived 10 minutes ahead of the scheduled departure.  We as the employees naturally arrived 5 minutes ahead of his arrival.  At the time, I felt I wasn’t clever like Shaw Lo Ban, so at the least I should learn from him to be punctual.

Lam: I entered the industry in 1989 to film a movie with Danny Lee (李修賢). He’s also started off in Shaw so he imparted in us the Shaw actor’s ethics.  When I saw someone being late I would speak up.

Steven: I’ve seen King Kong confronted even the main leads. We three are birds of a feather flock together.  We won’t randomly cause trouble, if that were the case people would dislike you.  But if we see something unjust or improper, we won’t because of being afraid to offend people let the situation slide. Using an ancient saying: we dare to speak our minds honestly in the face of power.  不畏權貴 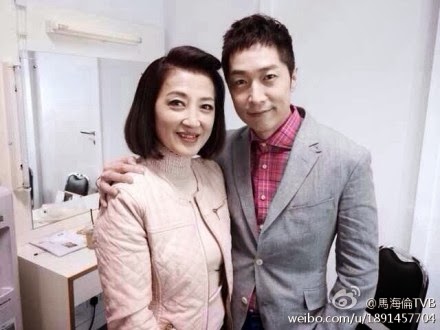 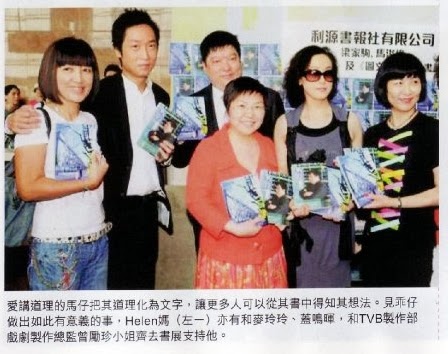 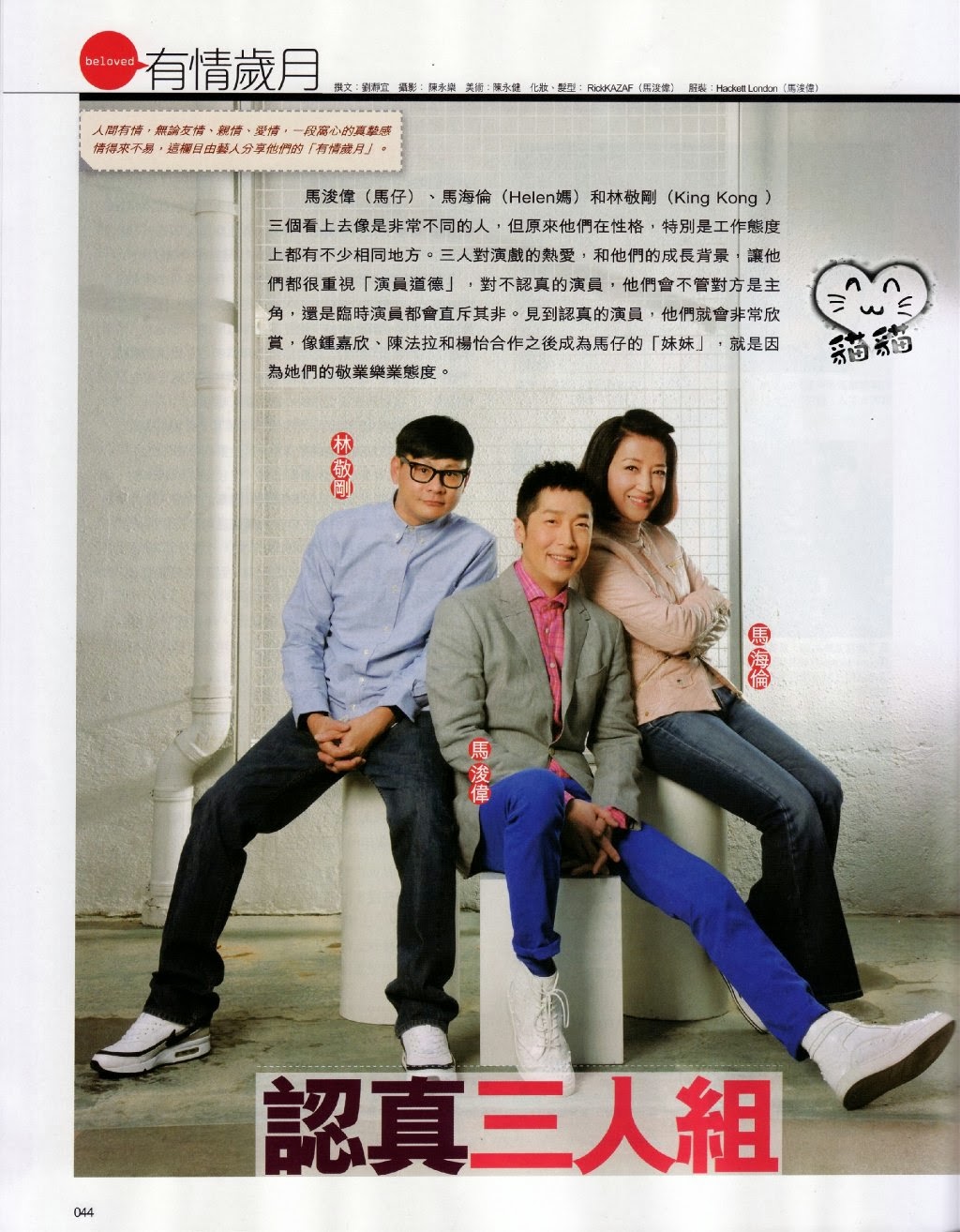 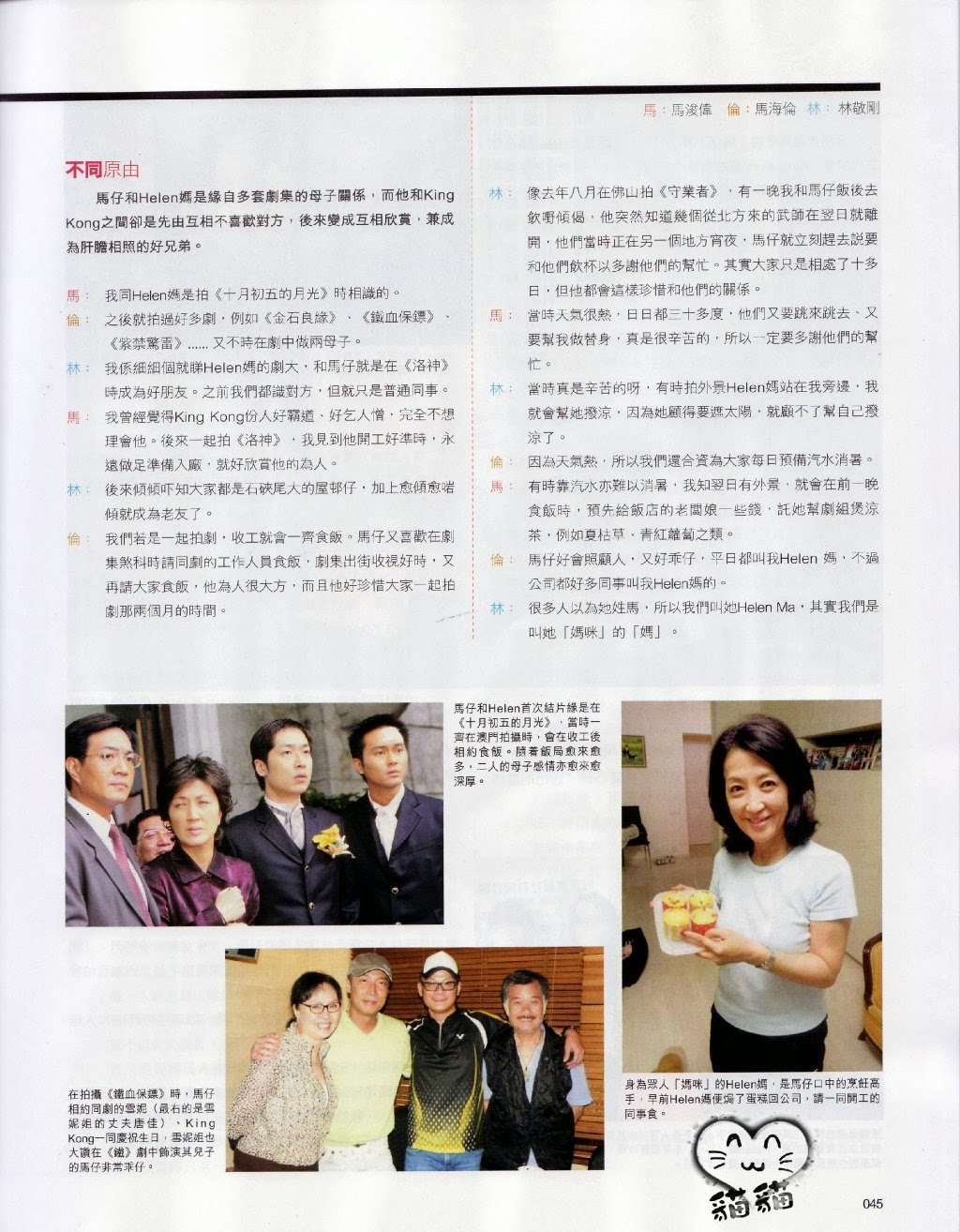 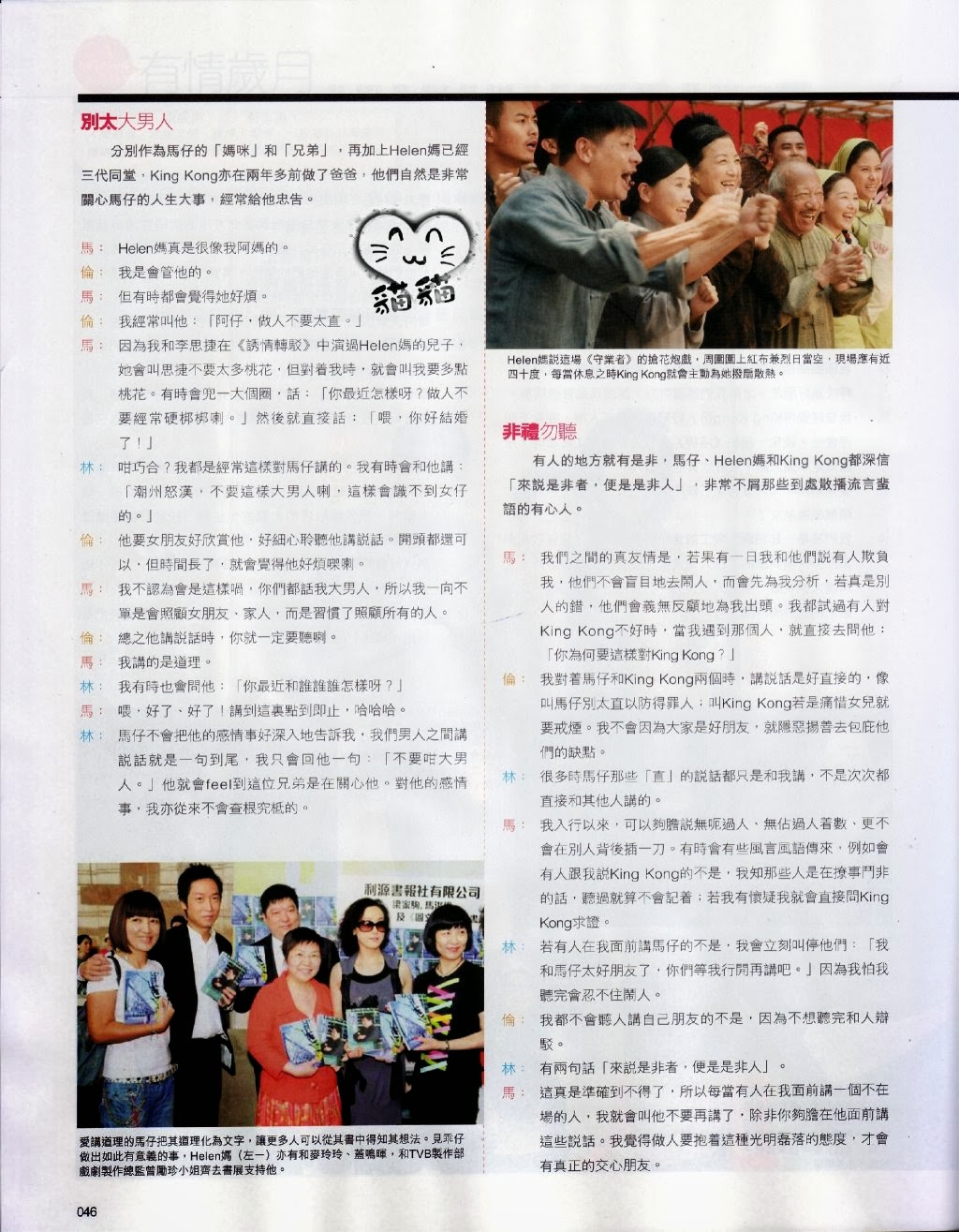 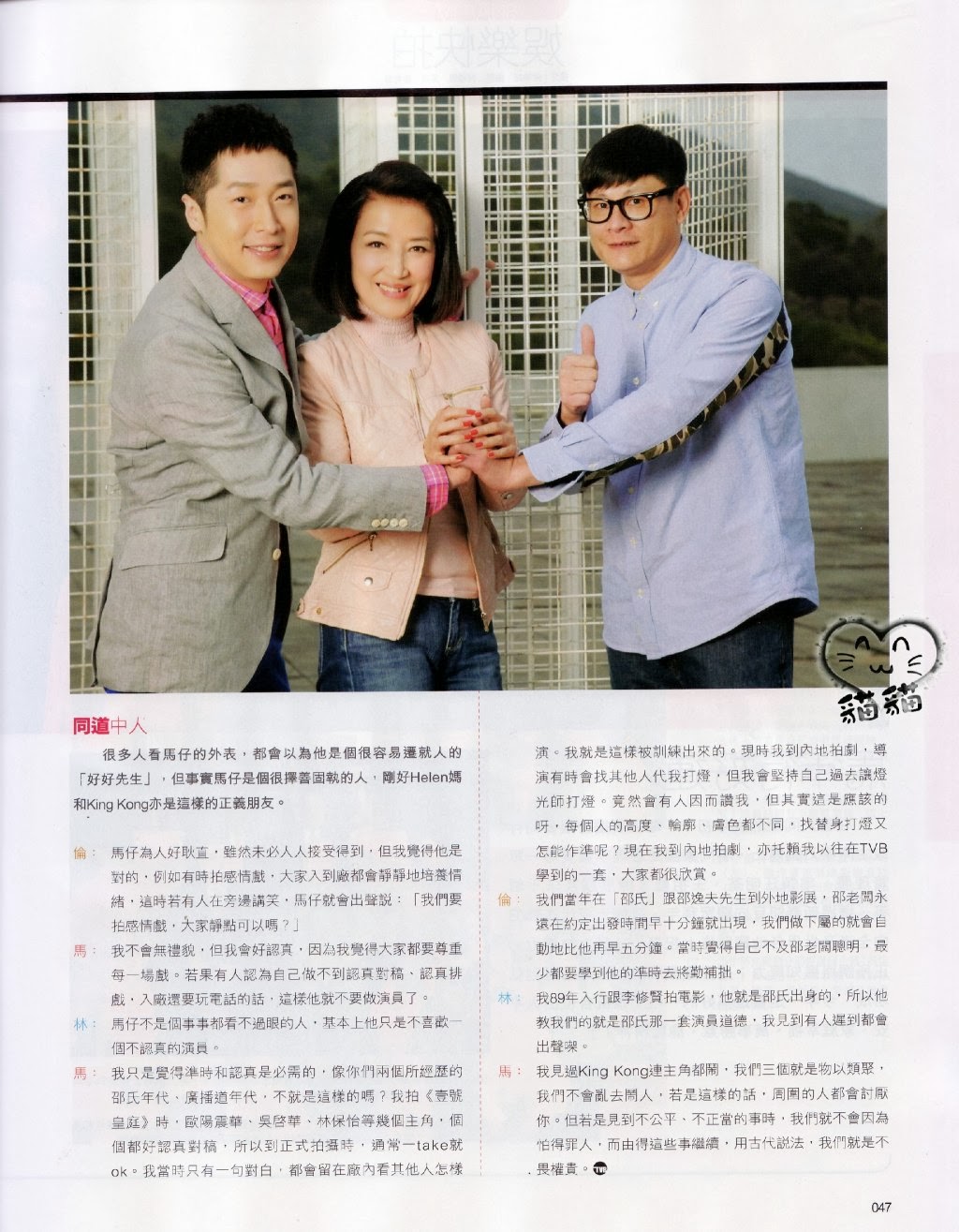 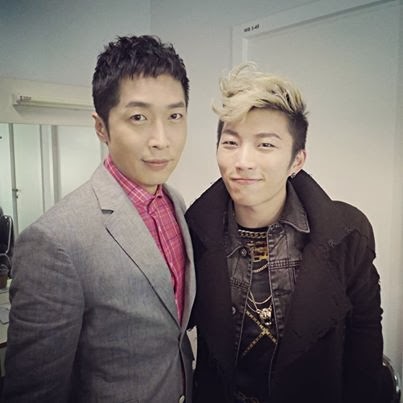