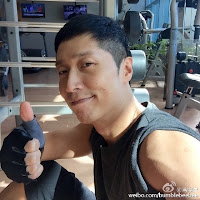 2015-06-06 21:04  Good morning! After breakfast, went jogging and then gym. Will go to rehearsal later! Toronto's weather is great. Heard both shows are sold out!  Give thanks! Hallelujah! P.S. Maybe lack of sleep, so today's double eyelids are very pronounced. Haha!


Steven has mentioned a few times on weibo that his eyes would appear bigger and his double eyelids more pronounced if he lacks sleep.

The night before flying off  to Canada