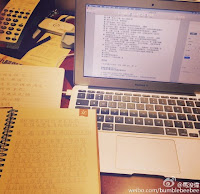 12月6日 01:46  Script writing is a lonely road; the more you know, the lonelier you could only become; only you know what you know thus only you can resolve it! I'm going crazy! Everybody, quickly give me support. The writing is tough but (I) can do it and do it well, too. Don't worry!  If have free time, give me a 'like' la!


From the uploaded pix, looks like the script involves Xu Zhimo and Zhang Youyi.  Good luck on his writing which is indeed not only a lonely process but a lengthy one, too.

From my superficial read-up on Xu Zhimo, though unimpressed by Xu's character (defiant, selfish and totally spoiled by his parents, that being said, his indomitable spirit is admirable), I do however sympathize with his situation brought on by his time -- fueled by youthful rebelliousness and youthful single-mindedness, idealism, romantic notions, a poet's passion and temperament, and newly acquired modern ideas he felt alienated and fettered by China's close-minded society, Chinese cultures and traditions, Chinese morals and values, Chinese superstitions and Chinese filial obligations. In short, Chinese conventions clashed with his newly acquired western education and worldly exposure. Given his young age (a mere 18- year-old teenager when he got married), he was gutsy to sever these societal shackles (as the first couple in China at the time to get a divorce) just so he could live his life the way he envisioned it, and to be with the woman he loved at the time. Unfortunately and inevitably, his defying parents and China society in pursuit of own happiness hurt the people who loved him, and in the end, he still did not achieve the happiness he longed for.

The times were against him.  Indeed, he lived a typical poet's life - inspired but tragic and unfulfilled because he felt so much more with a poet's heart and idealism.  He's a man both inspired and subverted by his times;  a man both energized and disillusioned by the women he loved; a romantic idealist whose life was gradually but inevitably sapped by the everyday living and society's expectations - he's a Jonathan Livingston's seagull with wings clipped.

Take away his romances with 3 women, his tumultuous life exemplifies that of many an overseas returnee who after having lived in a more open and advanced western society found it difficult to adjust and conform to the old world China society, and to marry a wife not of his choosing. They were all being tugged between familial duty and society's expectations against individual freedom and personal desires, those like Xu defied while others conformed to marrying a legal wife (of his parents' choosing) with mistresses aplenty on the side. Yes, Xu was caught in a time warp but he was still a cad for his callous treatments towards his 1st wife, Zhang. Their divorce was a blessing in disguise for Zhang as it released her from being a long suffering wife to a husband who  did not love her, and for her to find her inner strength and fortitude, thus becoming the strong woman that she was thereafter. Anyway, Xu got his comeuppance.  Pity that the footnote to this great Chinese poet is that theirs were the first divorce of irreconcilable differences in China. Indeed, Xu was a man before his time.  Perhaps had his parents and society not trapped the unwilling Xu in an arranged marriage at such a young age, could his and Zhang's tragedy be averted?

Below is a video on 1st wife Zhang Youyi


Huang Lei did an excellent portrayal of Xu Zhimo, and he was so cute then.
Young Huang Lei and young Steven have similar cultured and scholarly feel.
Wonder how Zhou Jie (of Huang Zhu Ge Ge) did on his 2013 stage play on Xu Zhimo's life?