Everybody please vote Steven. He is nominated for 6 categories: Best actor, most favorite tv male character, best series, tvb.com Popularity (as opposed to top tvbblog), best variety show and Most admirable program of excellence - the last two for Since 1967.

If you have problems, ANY at all, please see link from another tvb artist's fanblog. And if you don't have a HK id#, no problem, again link above has the solution to it, just scroll down to the bottom of the page for  ID generator to get one. If the id generated is not useable, click `2'  again to get a new id. (or google for hk id generator.) The ID must be 8 characters. The 6 characters must be digits 0-9. The standard format of the HKID number is X999999(C), where X can be any capital letter followed by 6 digits and C is the check digit.  see link for explanation 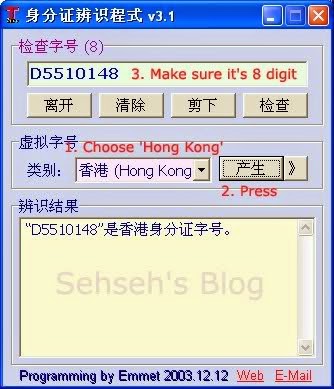 Actually, you can skip that id generator by googling the sample of HK id image and then inputting similar numbers using HK id format like how one can get fake Malaysian id for Astro and Singaporean id for Starhub.  It's all a game!

Tamaya: Since Steven will be at the Vancouver Beauty Pageant as a special guest star on the day of TVB 42nd Anniversary Award night, Dec. 4th, his chance of snagging an award is nominal at best, but still we should vote for him if only to inflate his votes for show.

Nikki01: Tamaya, why should Steven's chance of snagging an award be low if he is not present? Do you mean that since he is allowed to engage in the Vancouver Beauty Pageant on that day, it shows that TVB is already indicating that he is not going to win or not considering him as a likely award winner or...? I wonder if all the awards are allocated solely based on this fan voting method. If so, then there may be some older artistes who deserve an award but are not selected owing to the lower number of internet savvy fans. I believe there must also exist a panel of judges whose judgement will carry weight besides this fan voting method especially in the final round of selection. Is this fan voting only a screening process and final selection is still dependent on a TVB or its appointed panel or this is it? Do you know?

Tamaya: How to say this? --- that the award system is rigged? It's a game that TVB management plays with its artistes .. much like the carrot and stick mind game. Toe the company line, you might just be awarded, else good luck in ever getting one. But occasionally, some of tvb management award decisions might actually coincide with fans' preference esp. when the series and the candidates are red-hot like Wayne Lai and Michael Tse this year. But yeah, in most cases, the award decisions based on TVB's own agenda have already been pre-determined if not carved in stone. Last year for the 1st time ever, Steven was off the nomination list for any award -- this year he has 6 nominations, think it had anything to do with his management contract being finalized at last? Jessica Hsuan terminated her tvb mgmt contract and coincidentally she is not nominated for any award.


Nikki01: Is this fan voting only a screening process and final selection is still dependent on a TVB or its appointed panel or this is it? Do you know?

Tamaya: I don't know for sure but it's no secret that TVB has the last say on the winners, who may or may not be the fans' favorites or the most deserving candidates. Stephen Chan has said time and again that this awarding of prizes to the artistes is totally a tvb internal affair, although fans' opinions are seriously taken into account in determining the winners. Yea, right, as if! So yes, the management has the final say. Fan voting as a screening process? I see it more like a process to hype up the anniversary celebration. But it can be a 2 sided sword - fans voting can 'push' or put pressure on TVB management to listen to its online polls to avoid alienating its viewers.


Nikki01:  Tamaya, unlike the normal western film awards which assess movies across many production companies and are really international in scale, for TVB which is assessing drama series and other programs under its umbrella, I tend to agree with Stephen Chan that this should be a TVB internal affair altho regardless, it still has to be fair and transparent in the eyes of all, including fans. Of course, the latter statement is subjective and not easy to achieve.

It is just like in a company, as a manager, I would want to be able to rate my staff because I believe I know them and their performance best. I understand this scenario may be different since we are talking abt artistes whose performance is really open to all who watch the series to judge but then as an employer of these artistes, other criterias such as work attitude, overall contribution, capability etc are also things that are important that the employer will want to rate (maybe you'll say, yes, but thru other means, not the awards). One thing for sure, if I were from the TVB management team, I shall want to have some say in the award allocation and not just based it solely on viewer opinion or poll.

Tamaya: Haha! Nikki01, you've said it all, anticipating and preempting my comeback response. 咩都俾你讲晒罗! No argument with your above scenario but, but here's another a scenario

If I were a company manager, I too would want to have a say in how the awards are being distributed. However, the case of TVB is different because by it ostensibly and sensationally  'inviting' the public to 'assist' in its award decision-making process, it gives the specious impression that the public's votes decide the winners. The truth couldn't be further away! It could be said that TVB is engaged in false and deceptive advertisement, without even so much as a disclaimer to say that all final decisions rest with the TVB board of directors. 今年「萬千星輝頒獎典禮2009」共設15個獎項，其中12個獎項有賴你的神聖一票 This year 2009 anniversary has a total of 15 awards, 12 of which depend on your votes.

Since TVB made such a big deal of seeking the public's opinion on deciding the winners, it should at least give an appearance of respecting its opinion, and not alienate them by being so obvious in its agenda by awarding the incomprehensible and undeserving winners. Like I say, the polls are a 2 sided sword. TVB should really insert the above disclaimer to its invite.

Nikki01: Hehee! Tamaya, I did try predict your comeback response but hah, I know too that you will still come back with a reply that will make me scramble and bang my head..... You are right, TVB must add a disclaimer that the poll results are not the only deciding factor if true. Is it true that TVB did give out awards to incomprehensible and undeserving winners?

Tamaya: yes! Those come right to mind that did not mirror majority's opinion are:

Kevin Cheng - after all these years, he still gets bashed for it. lol! The untimely award is more a bane than a boon to him.

Gigi Lai over Sheren Tang in WAB? Even Charmaine's acting was better than hers, not to mention Maggie Cheung's.

Fala Chen, the best supporting actress for Steps. ?? Fala has potential for great acting, but not at the point in time when her Cantonese was still considered atrocious.

Shirley Yeung, the best supporting actress for Always Ready - one of the most boring series I've ever watched. Her performance was just average. too.

Strawberry: I think tvb gives the award to whom they like. The voting part is just to show audiences they are doing something. Some actors/actress does not even deserved to be nominated.