Acting is not my objective, helping people is 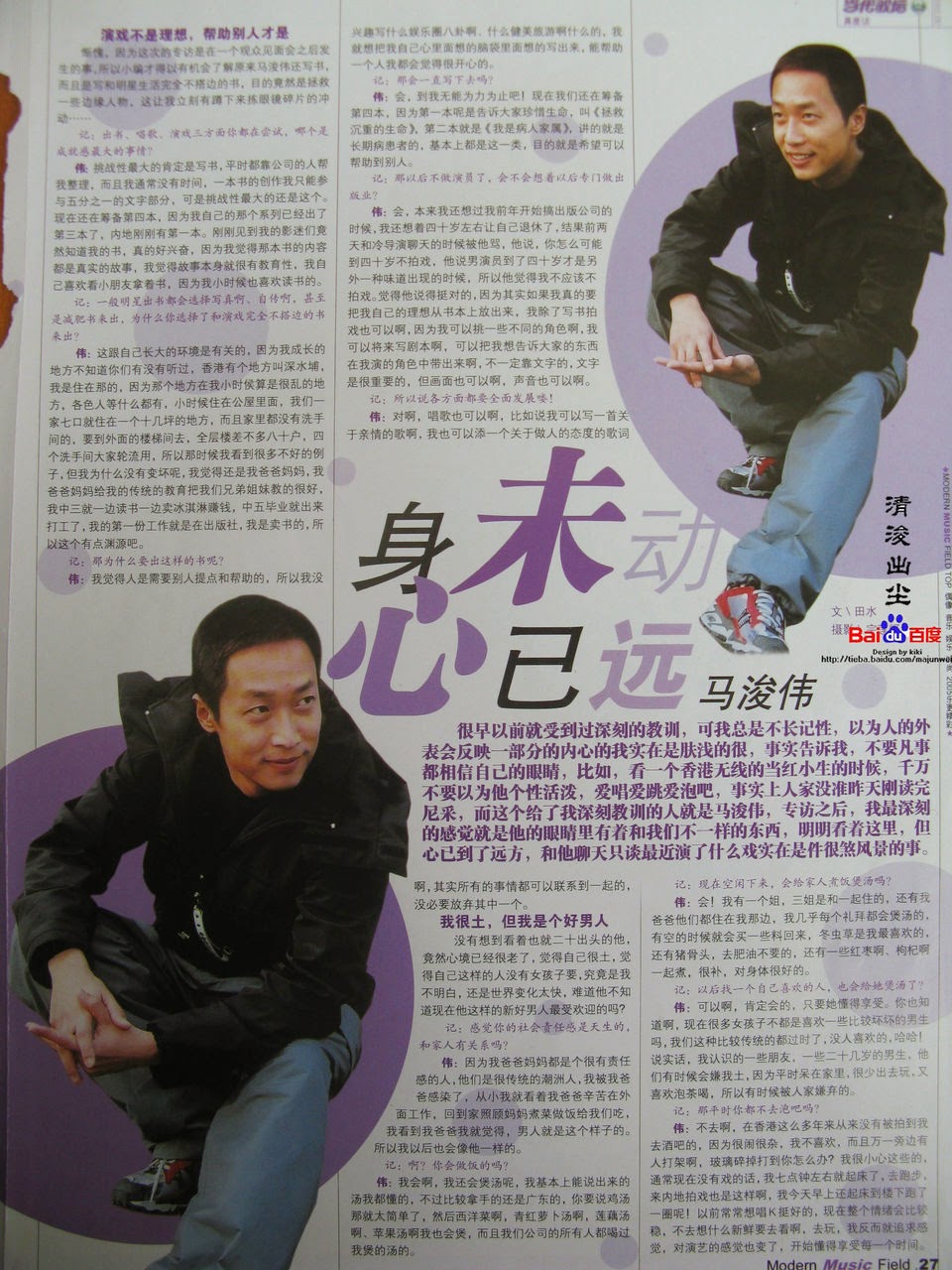 Abashed, because if not for this interview taken after a public social event, I would not have found out inadvertently that Ma Chun Wai has written several books; moreover, books that are totally unrelated to entertainment or stars' life stories. What’s more, his purpose for writing is to reach out to those who have fallen by the wayside. This discovery evoked in me an impulse to immediately get down on my knees to pick up my imaginary shattered pieces of eyeglasses.

Journalist: Publish books, singing, acting, all these you have experienced, which of these give you the greatest sense of accomplishment?
Steven: Undoubtedly, writing a book is the biggest challenge. I depend on the people in my company to help organize my book materials. Because of time constraint, I could only co-author one fifth of the writing in the book. But that’s where the real challenge lies. Right now, I am preparing a fourth book, as I have already published three books in my series. Recently, one just came out in China. I just saw my fans (China). They knew about my book. I'm truly happy to know that. The book is based on real life stories; therefore, the stories themselves are intrinsically educational. I, myself, like to see young friends reading a book. When I was young, I, too, like to read.

J: Most stars when publishing a book are more likely to write an autobiography, or a pictorial album/journal, even diet books, and the like. Why did you choose to write books that are totally unrelated to entertainment?
S: It’s related to my background. Because I grew up in a place, don’t know if you’ve heard of it; in Hong Kong, there’s this place called Sham Shui Po; I grew up there. It’s a chaotic place; all kinds of people lived there. When young, we lived in this public housing. My family of seven resided in this tiny living quarters. It didn’t even have a bathroom. We had to use the common bathroom outside by the staircase. The building housed eighty households, and four bathrooms which residents took turns using. So during that period, I was exposed to all kinds of unpleasantness, but why didn’t I turn bad? Because it had a lot to do with how my parents brought my sisters and myself up. While at Form 3 (Grade 9), I was simultaneously attending school, and selling ice cream to earn money. Right after I finished Form 5 (Grade 11), I joined a publishing company. I sold books. I guess there’s that source and origin.

J: But why this kind of books?
S: I feel that people in general need other people’s perspectives and assistance. I’ve no interest whatsoever in writing entertainment gossips, travel guides, or on beauty and fitness, and the like. I only wish to write about my feelings and thoughts. If they could somehow benefit just one person, I would be very happy indeed.

J: Would you continue with your writing?
S: Yes, until I can’t do it anymore. I’m right now preparing the fourth book….. It will be written in the same genre as the earlier ones.

J: When you’re no longer an actor, would you like to go into publishing?
S: Yes. In fact, at the time when I established my publishing company, I’d planned to quit acting when I’m forty. But just two days ago, I had this discussion with Director Lang. He gave me a good scolding for my thinking. He retorted how could you even think of not acting at forty? He said that’s the time when an actor is truly in his element and is able to exude a totally different kind of charisma. He was totally against my plans to quit. After re-thinking, he did have a point. Because if I truly want to communicate my viewpoints through books, there are actually other mediums I could use, too. Besides books, I could also do it through TV series by choosing different kinds of characters to portray. I could even write scripts. And also, my characters could convey what I want to communicate to the public. Really not necessary to strictly do it through printed words. Printed words are indeed important, but images/videos could also be used, as well as, audio.

J: As such, it could be done through different mediums.
S: Exactly. Singing could do that too. Like for instance, I could compose a song about family love, or include some words about the meaning of life. Actually, a lot of stuff are interrelated, no need to relinquish any one of them.

Flashback
Long ago, I was taught an invaluable lesson, but it didn’t stick in my memory. I often took people at face value; that people’s appearances reflect some of their inner selves. I was being shallow. Reality tells me that I should not completely trust what I see with my own eyes. For instance, like regarding this one popular TVB actor, I should not immediately jump to the conclusion that he is gregarious in nature; that he likes to sing, dance and frequent the nightclubs. In reality, he might have just finished reading Nietzsche the night before. The person who taught me that invaluable lesson was Ma Chun Wai. After that interview, my deepest impression of him was that his eyes beheld something not found in ours; his presence was here, but his heart was elsewhere. That we only chatted banally on his recent series was truly a bit of a downer.

Present
~~~I’m old-fashioned, but I’m a good man~~
Who would have guessed gauging from his appearance, twenty something at the most, that he would possess an old soul. He thinks himself old-fashioned, and that women will not be attracted to his type of men. Is it because I didn’t get it, or is it that the world is changing too fast? But doesn’t he know that nowadays his type of good men are most welcome?

J: It seems your social conscience is inborn. Is it because of your family?
S: Well, my dad is a very responsible person, as was my mom, and both very traditional Chiu Chew people. I am greatly influenced by my dad. From young, I saw my dad, after a hard day at work, would come home and take care of my mom, and cook for us. When I look at my dad, I see how a real man should be. That’s how I want to be, just like him.

J: Ah? You know how to cook?
S: Yes, I do. I even know how to make soup. The soups that I know, I can basically make all of them. But I’m better at Cantonese dishes. I know how to make chicken soup, celery soup, carrot soup and even apple soup. In fact, the people at my company have all tasted my soups.

J: During your free time, do you make soup for your family?
S: Yes. My third sister and my dad live with me. Almost once a week, I would make soup. …(tn: not anymore)

J: When you find a loved one, would you make soup for her?
S: Sure. Of course, if she knows how to enjoy them. As you know, most women these days prefer men who are a little bad. My kind of men who are more traditional are considered outdated. Nobody wants them anymore. Haha! Actually, I know some friends, men in their twenties; they would sometimes complain that I’m too old-fashioned. Because oftentimes I preferred staying home to going out. I even enjoy brewing tea (Chinese). That’s why, sometimes people abandon me.

J: So, you seldom frequent the nightclubs?
S: I don’t go there. All these years in Hong Kong, no snapshots were taken of me inside a nightclub. It is too rowdy in there. I don’t like it. .. Usually, when I’m not working, I would get up around 7 and jog; even here in China. Just this morning, I went jogging. In the past, I enjoyed the karaoke bars, but I've outgrown that as I mature. Nowadays, I don’t pursue novelties just because they are new and different. Instead, I prefer to indulge in the feelings of the moment. My attitude toward acting has also changed, now I know to enjoy every moment of it.