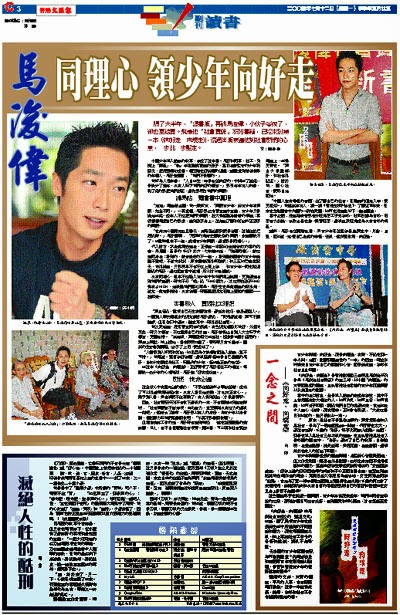 It's been half a year before Du Shu Ban (Books Section) did another interview with Steven. This fellow has lost weight, but still looks good. Like his Tales of Society book series which is now onto its third book [向好走 向坏走] (Headed the Right Path, Headed the Wrong Path), likewise Steven’s commitment to social issues, expressed through his publications, has steadfastly strengthened.

The book tells the stories of 10 young men who somehow along the way took the wrong turn. Steven, together with a colleague and a social worker, had pounded the streets, ‘accosted’ late night young loiterers, and chatted with juveniles placed on probation; their encounters were later compiled and narrated into that very book. Whether these young men are straddling the fine line of good vs evil or are convicted felonies, Steven strongly believes that, "They are not bad."

He believes that human basic nature is good. "Since birth, people have strived to be good, but somehow, somewhere, they strayed, and got lost because of lack of direction. No one showed them the right way. In order to guide young people onto the righteous path, or to straighten them up from wrong to right, one must first understand their problems."

"Thump, thump", he knocks on the desk top; his face solemn: "Problem teens and teens with problems are two separate issues," he reiterates. Steven wants the reporter to really get his reasoning behind it. "Teenagers make mistakes only occasionally. Therefore, the adults should not so magnify those mistakes that they stick out like labels, and then forcibly imposed demands on the offenders. These actions will not help them to understand or solve the offenders’ problems."

"Spending the night at the beach chatting till dawn; wearing earrings, dying hair does not mean he’s bad; this kind of thinking is outdated." Steven continues: "Using my point of view to solve your problem will never work because the starting points are not the same. To solve a teen’s problem, the most important thing is empathy."

The ability to put oneself in another’s shoes is the very subject of the book EQ (Emotional Intelligence) by Daniel Goldman which was published six seven years ago. In EQ, its author advocates: "Empathy enables feeling another’s experience and emotions; seeing with own eyes is more strongly felt." Sure, youths squatting by the roadside are an eyesore, but surprisingly, squatting is really quite comfortable. And if one chooses to shoot the breeze with some buddies, it can be quite fun if one does not have to go to work or school tomorrow morning. Steven, who has had such experiences squatting with a group of youths by the roadside, can easily relate to the book’s concept, which is why he recommends empathy when dealing with youths.

"Without empathy, one cannot communicate on equal plane with the teens, much less understand their problems. We do not need to try the drug ‘FING头丸’ to understand how ‘high’ it makes the kid, just so we could persuade him to get off drugs." Steven grew up in the poor Sham Shui neighborhood where gangsters and drifters were part of its street scenes. He did not turn bad instead, many a time, he managed to pull back friends from a wrong turn at the precipitous moment.

"During introspection, I realized I possessed a knack for eloquence, and can be quite persuasive." A hooligan in the eye of the public once told Steven: "When my parents reasoned with me, I refused to listen; however, the same reasoning coming out of your mouth sounds good to my ears."

He likes to observe and take note of his peers’ strengths. Some friends sing better than him, or look better than him- only that they did not have the opportunity to fully develop or display their talents. Steven, being a recipient of such an opportunity through someone’s generosity, is especially grateful. "After graduating, I went for an interview with Longman publishers. The employees had to be at least 18 years of age. Attired in suit and tie, I looked 21 (Translator note: I can’t imagine that!) but really I was only 16 then, however, the interviewer was very accommodating. After getting his boss’ approval, I was hired."

"People need empathy and assistance. It would be a pity if people chose the wrong path just because they were not given any help." He sighs. Steven, who strongly believes that being good or bad ultimately lies in one’s own hands, strives to inspire the lost teens with hope for a better life. The publication of this book, "Headed the Right Path, Headed the Wrong Path", realized Steven’s aspiration to contribute to society. Everytime he helps a teen resolved his internal conflicts, Steven feels a sense of accomplishment. His reaching out is purely driven by genuine concern. "Do not seek public eye – just so one could raise the hand in triumphant v when successful, and to lose interest afterwards. One should reach out even when outside the public eye…this is true altruism. What's important is: someone gets the help he/she needs."

The Tales of Society book series does not set a time frame or schedule for its last publication. "The problems in society are ongoing; we should do whatever we could do to help until they are beyond our help." As if entrusted with a mission, Steven wishes to use his artiste’s status to set a good example for the young people, and to influence them with his leads. "It’s important not be a bad role model."

But immersed as he is in an entertainment work environment, Steven often feels stifled by showbiz lifestyle of extravagance and dissipation, which can inevitably promote a detachment from real society. So publishing books allows him to once again be in touch with society, thereby greatly enriching his life. "I used to be a low-housing resident, living in close proximity to society", so his social consciousness for society comes naturally out of him.

"Most Chinese people have an urge to trace their roots and to understand their society. Their own community is a good place to start with." He recommends a book entitled, "香港左派斗争史" (The Chronicles of Hong Kong Left Wing’s Struggles) to the young people, so they would know of the struggles and oppression of a group of old patriots whose collective voice is now lost to the public, and how they were oppressed for the last hundred years under the British rule.

Or maybe, what Steven hopes is that through the book, the young generation will learn from its historic chronicles of blood and tears; and upon reflection will treasure their own fortune more; thereafter like him, will steadfastly walk the good path.

wenweipo paper
TN: A few years back, Shantou University Press bought the copyright to “Why Suicide”. Steven had planned to write the 2nd book first because of his own experience but first hand information was hard to come by then, (patients and their family were reluctant to talk) so he re-directed his focus on suicides. At that time, Hong Kong society was plagued by an abnormal amount of suicides, therefore, materials for that subject were easier to gather.