The 3 Stars in Steven Ma's Perspective 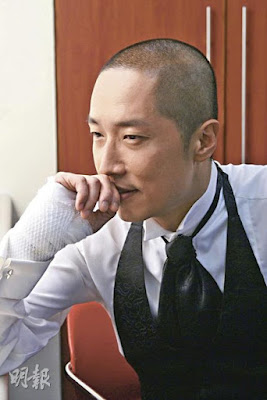 Steven Ma is TVB's "own child". It all started in 1993 when he first entered the entertainment industry. It is obvious that he was a TVB contracted artiste. TVB gives him chances in every series he films. Sixteen years, each step and each footprint is not easy to obtain the position of being male lead. From 2005 and on, TVB became Steven's manager. TVB raised Steven, and this "own child" is still receiving strict training from TVB. TVB can definitely "promote talented people" as representative characters.

"If you say I have improved in my acting, then I really have to thank Catherine Tsang. All of these years, she would point out my flaws and criticize them. I respect her very much. Every time I see her is like a student seeing a teacher. It is respect that comes from the heart." No one can calculate the future, but Steven expresses his aspiration honestly, "When I look back and think of my TVB friends and colleagues, Catherine will definitely be my most missed elder benefactor. Also, I'm very thankful to Lee Tim Sing. On my acting journey, he is my teacher."

好艷福 Does Not Mind Assisting Newbies
In recent years, TVB has been confident in Steven's "in house" image. The series that he has been male leads in have received positive feedback and stable rating points. Lee Tim Sing insisted in using Steven to be the male lead and Tavia Yeung to be the female lead in "Sweetness in the Salt". All of the other younger candidates used in the series are less experienced actors.

"All of my colleagues laugh at me saying I'm lucky because I get to pair up with pretty girls in every series!" He's so lucky; no wonder Steven does not mind being referred to "assisting newbies". "If the company thinks that I have this ability, then I feel really honoured." When talking to Steven about his "fate" with Tavia, Linda and Fala, he finds it very weird. "The love story I have with Tavia is usually full of troubled twists and turns. And Linda is always my wife. Fala has played my little sister in a couple of series. That is why she calls me "older brother" so easily."

Steven sees the three beautiful fa dans as "TVB's Three Gems". "The three of them have their own characteristics. Tavia's acting is mature and her outer appearance is good. She is very hard working and very 捱得. She loves the characters that she plays, and she gets into her character's emotion very easily. Linda worked with Steven when she first entered TVB. The Linda back then was simple and naive. In the days of working together, Steven is able to talk heart to heart to Linda. He also encourages her and gives her pointers on how to improve in her acting. Steven also tells Linda not be submerged by the fame and fortune. "A few years later, I again worked with her in a few series, such as, "A Journey called Life", "Pu Song Ling" etc. I think she is the same as before. Her chaste and grace comes from inside. She has never changed, but her Chinese has improved. She has great performing potential and she has many talents still to be discovered." In Steven's eyes, Linda is strong, friendly, and insistent. She is not what the audience sees her as just a little girl. "Her thinking is very simple, it's just that her work load is too heavy lately and it affects her health. If her work schedule is arranged a bit better and that she rests a bit more, her performance can be better."


Fala Chen the Beautiful, Clever, and Loves to Act Fala has a pair of big dark eyes. When her eyes move, her innermost feelings are revealed. "For an actor, window of the soul can definitely captivate the audience. This is Fala's winning trait. Also, she is very straight forward and she will not hide her thoughts."

Every person has their own personality and people who are familiar with Steven will know that he is a typical Chaozhou man whose speech is gruff and direct. Sometimes, his speech can instantly hurt a friendship if one cannot bear it.

Did Steven scare the three beauties when working with them? "The three of them and I get along very happily. They are willing to communicate honestly with me when filming together. If opinions arise, then they are directly expressed because they trust me. They believe that the opinions I raise are not aiming directly at them, but it is good for them. And they do accept this type of method of expressing opinions."

Steven admits that learning how to communicate with his partners well is all thanks to the pointers from the veteran actors. "Kent Cheng, Wayne Lai, Ram Tseung, Lee Kwok Lun, Kara Hui, etc. have all taught me before. Other than acting, they also taught me that acting cannot be selfish, and I cannot just think about myself and always thinking about defeating my opponent. But, it has to be good for everybody.

With the concept of "Good for Everybody", Steven cherishes every scene with his partners. "Actually, I am still studying the art of acting. I still hope for veterans to teach and assist me. So, working with the three fa dans should be called "working together" and not "assisting newbies". But, seeing hard work and improvements, I can definitely say they will have great achievements in the future. And I am not lying about it."