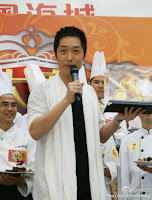 on.cc 6/20/2011 Hosting Apprentice Chef brought out Steven Ma's latent cooking talent.  Furthermore, the successive increases in the program's ratings made him very happy, hence, an extra episode is added to the show.  For  Father's Day that just passed, he spent two days in preparation, and personally cooked a feast for his father and family making his father very happy.

Apprentice Chef adds a special edition episode, Steven Ma thanks audience for their support.
Because of its novelty format plus its cash and award prizes amounting to over 3 million hkd, TVB program, Apprentice Chef, hosted by Steven Ma, not only attracted numerous chefs to compete but also the appreciation of the audience.  Because of its favorable ratings, TVB plans to add a special edition episode right before the final competition, Chef Ma will have an extra opportunity to show off his culinary skill, which makes him very happy.

In the past, the average rating norm for the Saturday 9:30 pm timeslot was about 17 points, but since its debut, Apprentice Chef's rating has been gradually increasing to its present 23 points. (tn: AC debuted at 20 points)  Company is very satisfied, so has decided to add another episode to it.  Of course, Steven is very happy.  He says good ratings aside, he has benefited much from the show.  Since hosting the program, he has received  many cooking tips from numerous renowned chefs; his latent cooking talent is ascertained, making him more confident in his culinary skill.  On Father's Day, he personally cooked a feast for his father and family to enjoy his cooking.  His menu included eight dishes and a soup  such as Golden Prawns, stewed ox tail, and of course, his beloved snow fungus and pig's tendons soup. After partaking his food, Father Ma and family all unanimously praised his cooking.  Seeing the happiness on his father's face, Steven felt that the two days of preparation was totally worth it.