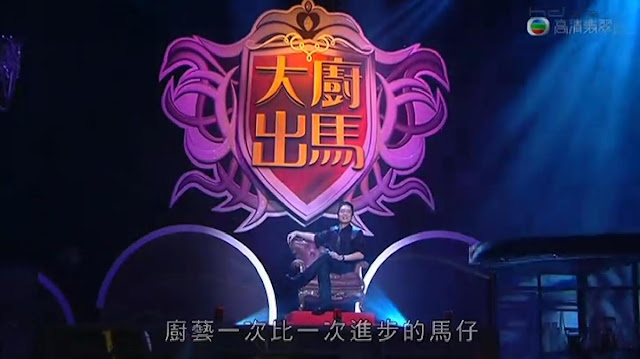 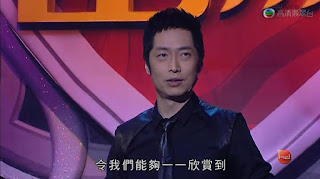 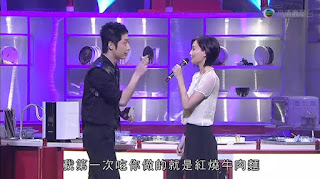 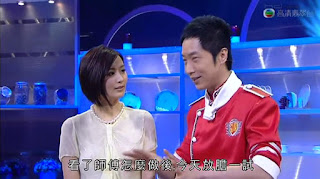 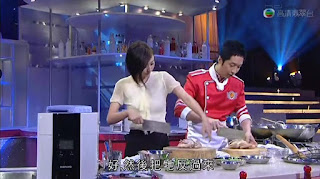 S:  Welcome everybody the show, Apprentice Chef.  I'm Steven Ma.  I believe that every chef that participate in this show will view this throne as their target. I hope that all the chefs who compete will grasp this opportunity to impress us with their intricate culinary skills. Let's get on with it now, introducing immediately the 3 chef contestants.  ..............

Voiceover introduces the renowned master chef. ...his knife skill is out of this world.  This time he is going to show Ma Zai how to cook lan du veggie stir fried with pigeon breast.  The skill includes stir frying and de-boning of meat.

Steven: sifu Yeung, you're going to teach me how to stir fry lan du veggie with pigeon, how to debone the pigeon while keeping its shape?  1st cut, cut alongside each breast bone

Chef: After cutting it apart, will now have to debone, it'll be harder

Steven: cut on the wing joint.  Sifu Yeung, the cleaver you're using right now is most suitable for deboning?

Chef: Most suitable because it is light and very sharp

Steven:light and sharp, so wing is deboned.  Don't want the wing tips?

Steven: So now the meat is boneless.  So this will be my target to aim for. Now 'pull' the oil first.

Chef: deep fry the landu veggie in the oil first.  Then deep fry pigeon so they will separate, for easy stir frying

F: Did I hold the knife the wrong way?

S: It doesn't matter. Ok, at this time, let's see if can get the bone out.

S: Because it needs to be seasoned

F: Should have said that earlier, so didn't have to work so hard

S: Sifu said need to season the meat for 3 hours.  So this one has been seasoned for 3 hours. Have readied this kailan.  Will cut into shapes like that of sifu's. I saw sifu cut them at a slant.  We'll do the same. Ok?

S: Pour them back out, now deep fry to crisp up the pigeon's skin.

Jackie:  Are you going to do wok 'toss'?

S: I worry I'll toss the food onto the videographer's body.

S: now at this time add in the pigeon breast.

S: Is that right?

S: pass me some soup stock

S: Ready for the plate

J: Do we really have to eat it later?

Male voiceover: Steven had Fala as assistant cook, though entertaining just how helpful she was we could all see.  Ma Zai learned  to cook from renowned chefs, after one observation he has to replicate the same dish,  what's the success rate exactly? Let's immediately taste this slightly burned landu veggies stir fried with pigeon breast.

Female voiceover: After tasting, tell us your feeling.
audience: delicious; quite tasty;
Audience: smell very good.
hostess: But you've not even tasted it yet?
Audience: I can smell it.
hostess: Seeing Ma Zai already knew it smells good?
Audience: Very good!  lek!

Steven: So in every episode during this section I always have to stand on this platform to experience the stress felt by our contestants.  Kailan stir fried with pigeon

Meijie: Turn out to be really tasty.  like extremely tasty. I thought it would be tough or maybe not aromatic enough. This dish is very difficult to cook

Judge2: But your dish has both aroma and taste.  Nevermind about color or lack of it.

Jackie: Now there's something that you didn't even expected why it tasted delicious, it's because you burned it slightly.   When I eat char siu (barbecue pork) I like eating the fatty burned meat. Yours is a fatty burned pigeon.

F: I think what you did best is that you seasoned the pigeon very well. The seasoning was thoroughly absorbed into the meat.

S: Very happy to be able to appreciate the pressure felt by the 3 chefs 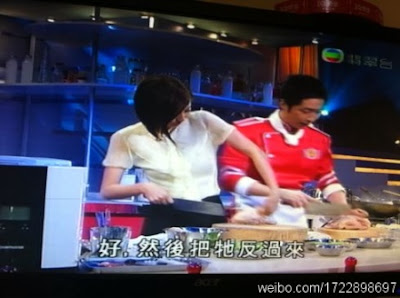 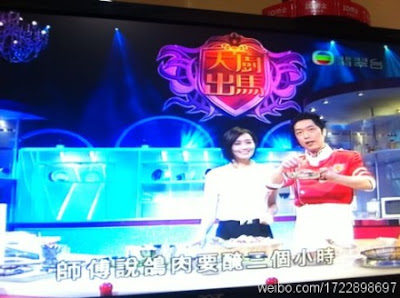