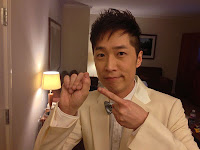 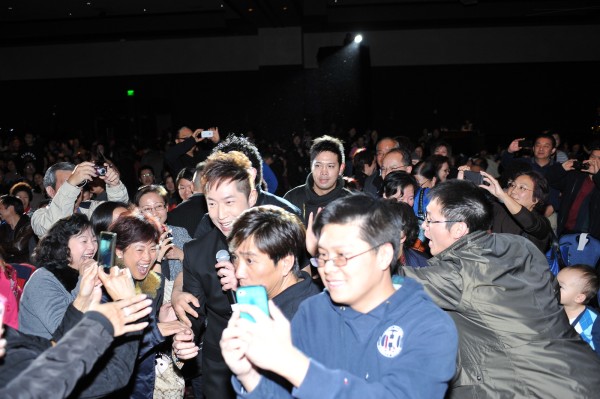 12/27/2012: During the Doomsday period (12/21), Steven Ma was in the US holding two concerts (2 shows in San Francisco (12/22) and 1 show in Los Angeles (12/23). He sang many classic songs including Shanghai Bund, Return of the Condor Lovers, etc., and his own series themesongs including those for 'Where the Legend Begins', 'Perish in the Name of Love', and 'The Life and Times of a Sentinel'.

Steven's shows went smoothly with fans displaying great enthusiasm. The atmosphere pumped up with wave after wave of frenzy from the fans, but unexpectedly in the Los Angeles concert, an incident happened. When Steven got off stage to shake hands with the fans on the floor, besides being taken advantage of by ardent fans (抽水), his face and head touched intimately, he was also mobbed by fans jostling for a handshake with him. Maybe because of the fans' frenzied grabbing, Steven thumb suddenly spurted blood (爆拇指), and both his hands were later found badly skinned and marked with red scratches. Steven did not mind the fans’ display of ardor. Luckily the mishap is offset by gain. The fans in the audience chased after Steven to give him big lai si. (lucky red packets). When asked about his hands, Steven chuckled and jested that New Year was not even here yet but his hand already saw 'red', for sure he will have luck on New Year's Day.

Steven said: "Very happy my performances went smoothly. (But your hands got hurt wo?) No problem; it's fine! The fans here had not seen me for a long time, so naturally when they saw me they were very enthusiastic. They were overly polite (hak hei) - gave me big 'lai si' (lucky red packet). I told them New Year’s Eve still a few days away but they said the few days difference don’t matter. Since they get to see me now they want to give me the lai si in advance.”

Seeing the warm and fervent reception in Steven's concerts, the event organizer, Janice, immediately invited Steven to hold more concerts in other US cities.

When queried about his plans for next year, Steven says: “First of all, good wishes to everybody for the upcoming year. For myself, I’m presently collecting new songs. In fact, I've just finished composing and writing my first song ever. I’m also learning how to direct and produce series. Hopefully, my acting and singing careers will advance together.”

TN: Haha! I overlook Steven in the 2nd pix surrounded by fans. 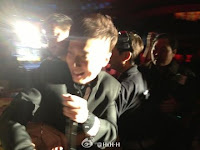 HxH-H weibo
This pix was taken when Steven was holding my hand. The aunties behind me were so aggressive bah.

How come Steven has become so much better looking now?

~~chat~~
HxH-H:The aunties were super crazy!
A: Maybe he now has hair?

HxH-H:The aunties love him. His eyes look bigger and his face shape nicer.
B: Plastic surgery?

EllllllllllllliE：Saw Steven Ma today. Very handsome, very charismatic. Though his age is almost doubled mine but when conversing felt as if talking amicably to own brother.

Daniel_李：Went to the casino to watch Steven Ma's concert. Those si-na fans sitting in the front rows were so crazy = =!

related material: 2005 Steven chipped tooth in US concert
Steven sees 'red' when filming a Stupid Cupid scene.
Uploader & or translator: Tamaya at 10:30 AM