Steven Trivia Pursuit - unearthing old news
Singing with a mike around bodyguards can be risky for one's teeth and health!
Poor Steven! Getting hurt seems to be a day's work for him.

Steven Ma and Kenix Kwok held an Easter concert at Atlantic City, USA. Because their series had aired in both Canada and the US, their concert attracted a huge crowd of supporters, resulting in sold outs for both performances. The only hitch to the concert was when Mazai was hurt during his 2nd performance.

At that time, Mazai was singing Better Halves theme song. Accompanied by several security guards, he got off the stage to shake hands with the audience. Grasping the mike in his hand, he sang as the enthusiastic audience surrounded him. To protect him, one of the guards in shoving the audience away accidentally knocked the mike with his arm, causing the mike to smack against Mazai's front teeth, chipping them instantly. Mazai promptly felt an excruciating pain shooting right into him. So as not to affect his performance, he kept his cool until the end. He said: "I was in such pain that I felt woozy for a minute. I was worried that my mouth might become bloody. Luckily the roots of the teeth were not affected. So I sang through a mouth filled with blood. Even though the security guard was rough, Mazai did not blame him because it was an accident.

Afterwards, Mazai had considered going straight back to Hong Kong to see a dentist, but since he had already reserved tickets to visit NYC and to see Broadway shows, he had no choice but be a "chipped teeth leng zai" for two days. When he got done with his NYC trip, only then did he fly back to Hong Kong. Upon arrival, he immediately rushed to his good friend's dental office and though it was late at night, he had his teeth fixed immediately, thus enabling him to regain his leng zai appearance within a short period of time. He smiled wryly and said that stage performance got to be his most unforgettable experience since entering showbiz. 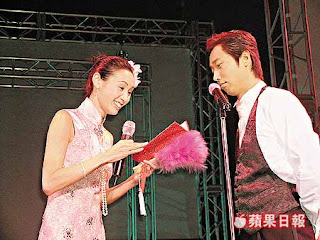