News: Steven Ma to shoot a TVB series in May

Yesterday, Steven Ma was at various radio stations promoting his new album’s 1st plug entitled “心照”, which he personally composed and wrote. He revealed the hi fi (superior) quality (發燒碟) full album will be released in June. Of the 11 songs*, five are composed and written by him, while eight songs in the album are Christian songs. He will hold concerts in July and shoot a mainland tv series in September in Guangdong.

Earlier there were reports that Steven would shoot a TVB pre-modern series “Property Protector” (守業者) in May. Steven explained that although his contract with TVB was still under negotiation he most likely would sign a per series contract with them. (Ask TVB to increase the fee?) He said he is satisfied with his fee. What worries him most is having to re-adjust to TVB work hours.

However, he does not want special treatment at work so did not request any. Anyway, he feels that recently TVB has been more concerned of the artists rest hours. The reporter suggested to him to take the lead to talk to TVB about implementing the one filming troupe per day work schedule, thus improving his fellow actors' welfare and maybe even become a hero himself. At hearing this, Steven laughed aloud and said: "Easier said than done. It's a difficult position. Wanting to be a hero (英雄) instead unwittingly become a coward instead. (狗熊)**"

Steven said in the series he will work with Tavia Yeung, Maggie Shiu, and Evergreen Mak etc. They are all old collaborators, like a family, so working together should pose no problem. In his first ever TVB pre-modern series, Steven will portray a military officer and what's more, he does not have to shave his head.

He said: "All these years in TVB, I had never shot a pre-modern drama. I would like to do it. I like this era a lot but never had the chance to do it. I feel that I'm very suited to act in this period. Spotting a slick back hairstyle (egg tart hairstyle) is no problem."

Because of his hectic schedule, would he have time to prepare for his July concert? He smiled and said he had already apprised TVB of that. He hoped that before signing the contract he had all the schedules finalized by then. Fortunately, he does not have to shave his hair so won't have to worry of that affecting his concerts.

tn: So, as expected Steven made the rounds with various radio stations in HK, unluckily Metro Radio HK does not allow dl on its website. Haiz, Steven said he is discussing the May series with TVB but the headline runs: Steven Ma to return to nest to shoot a series. 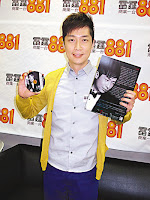 tn: So, as expected Steven made the rounds with various radio stations in HK, unluckily Metro Radio HK does not allow dl on its website. Haiz, Steven said he is discussing the May series with TVB but the headline runs: Steven Ma to return to nest to shoot a series.