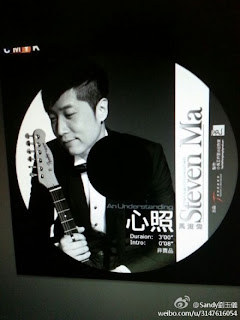 Sandy Lau 2013-04-05 22:12  Steven Ma's brand new music album (10 new original songs of HiFi quality, half of which is composed and written by Steven himself)  The title song of the album is  "心照＂ (An Understanding) will be plugged on April 11th 2013.  During this period, I was very moved to see the team's heart and effort! Thank you everybody for your selfless contribution, and also hope everybody will support.

HiFi 發燒碟 = high fidelity quality (feverish/ardent) == superior quality in audio equipment, recording equipment, music accompaniment, and of course in singing. The album strives to reproduce the integrity of the original sound of music and singing.

"派台" (similar to plug the song ?) = distributing a free cd demo of the song to various radio stations, in hopes they will introduce play the new song on their stations to their listeners.