Updated with English summary; Storm in a Cocoon promo poster. 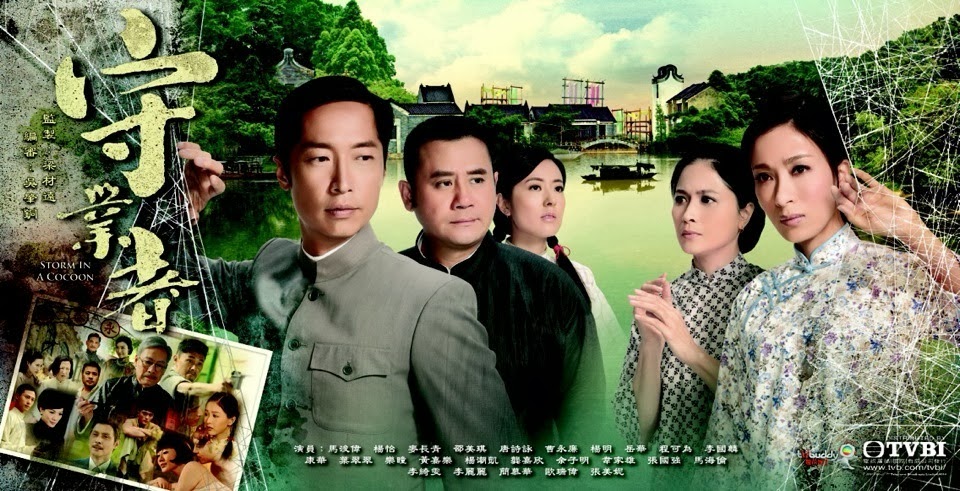 Show time: Feb 17 2014 at 8:30 pm concurrently airing on HK TVB Jade, Malaysia Astro and Canada Fairchild channels, respectively.  Looks like the names of most if not all the cast members on the poster. Recall a former tvb-HKTV artiste's gripe of not seeing her name on poster. I like the poster, in fact, I like the previous ones too.

Out of the blue, HAU-YEE commits suicide, so his second son POON KA-YEUNG (Steven Ma), who was serving as a combat medic, returns to his hometown, taking over the reins.  Apart from his discovery of HAU-YEE’s dubious death, the best friend of the late HAU-YEE, TONG BING-BING (Tavia Yeung) also has a feeling of suspicion, so the two decide to launch an investigation.  However, they instead unfold the intricate relationships between their family members and the silk factory workers, and anyone could be the murder suspect, which is a double whammy for KA-YEUNG.  All the girls working in the silk factory look up to the forewoman SIN PIK-WAN (Maggie Shiu) as their leader and constantly show hostility towards BING-BING.  Ever since she started working in the factory, big fat liar FUNG CHI-CHING (Natalie Tong) has chosen to stay single.  In fact, she is up to something, leaving the factory open to attack.  In the meantime, KA-YEUNG feels deeply attracted to BING-BING’s sense of righteousness and courage.  Just when their relationship is about to blossom into romance, tragedy strikes when BING-BING’s long-missing fiancé KWAN CHO-YIU (Raymond Cho) suddenly returns.  And the real murderer who killed HAU-YEE turns out to be beyond all expectations.   As one sows, so shall one reap.  The whole POON family has spun a cocoon around themselves and got stuck in it.  Although KA-YEUNG and BING-BING are determined to keep their family business, they have to deal with such immensely complicated situation involving countless others……
Uploader & or translator: Tamaya at 8:41 AM