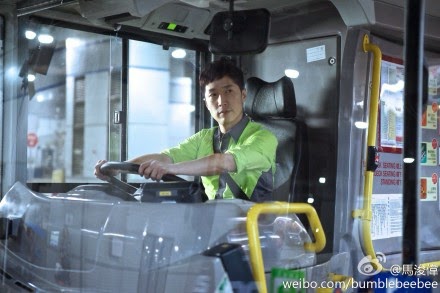 To commend father’s love, Steven Ma approached his music album producer with the story of his relationship with his father, thus, the creation of his new song, Ba Xi (爸士) dedicated to his father. Originally, Steven planned to produce a regular mv accompaniment for the new song, but he felt that their story could not be fully expressed within that few minutes. It just happened at the time KMB* contacted him concerning some other job. To make his story more complete and meaningful, Steven proposed his short film mv idea to the KMB person-in-charge, consequently getting the latter’s approval the use of KMB venue and bus to facilitate the filming of “ Ba Si (爸士 )*. Steven's first short film as producer will debut May 19 in all KMB buses for viewing by their onboard passengers.

Steven specifically produced the film as a Father’s Day present for his father, and on that day June 15 he plans to surprise his father with the viewing of his 1st short film as producer and present it to his father as a tribute to his fatherly love. In the short film, Hugo Chan (陳泓達) portrayed Steven’s younger self, while Gigi Wong Pui Chi (黃佩芝), a performing arts student, portrayed his late mother.

Steven’s father, a retired KMB bus driver of 30 years or so, is a taciturn man who rarely expresses his feelings hence it was difficult for Steven to understand the full extent of his father’s hardships. So, Steven incorporated a plethora of real feelings into the film to honor his father.

Steven said: “During filming, while seated on the bus driver seat the image of my father driving a bus flashed thru my mind; my feeling was tumultuous, inexpressible; thinking back to all those years of him toiling day in and day out in this small cramped space. Today, buses have improved in many aspects, but in those days the buses my father drove did not have a temperature control device so he endured both the cold and the heat; very grueling.”

To personally experience some of the hardships in his father’s job, Steven drove a bus around the bus terminus since he does not have a bus driver's license so could not drive on the road. Clad in his custom tailored standard bus driver’s uniform, Steven was teased: “Where got such a good looking bus driver wo?” Steven said: “Today, I had the rare opportunity to personally experience my father’s job, moreover, this mv short film was my first time as a producer too. It has definitely augmented my experience as a producer."

*Ba Si = a wordplay on baba + the colloquial Cantonese word for bus.

Steven weibo 2014-05-18 12:42 : Actually not only bus drivers but also mini bus drivers, taxi drivers, truck drivers and the like; everyday on the road for long hours cooped inside a cramped space, and when stuck in a traffic jam, the feeling is indescribable....tough; all for their families and livelihoods!