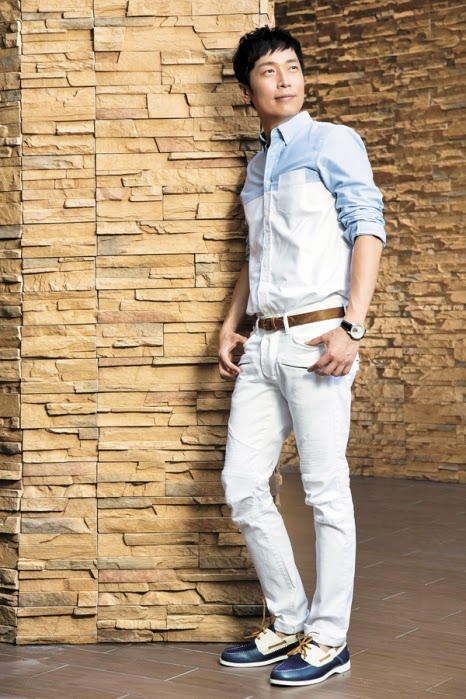 As the Chinese saying goes, “men at age 40 blossom like flowers”, and at age 42 Steven Ma is right now in his prime. The career mind Steven, like a workaholic, has been working nonstop in recent years, and as yet remains unmarried.  Recently, he personally produced a mini movie entitled “Father Bus”《爸士》as a tribute to his father.  Actually all along Steven has this wish to get married and have children but unfortunately his relationship with long time (ex) girlfriend suffers successive separations and reconciliations, ever decisive in his career Steven is presently at a loss with his love life.

As a first time producer and scriptwriter, Steven’s mini movie “Father Bus” is both a tribute and a Father’s Day gift to his bus driver father. The movie premise is inspired by Steven’s own childhood environment and memories. Steven says: "The boy in the mv (Chun Jai) is me as child. I myself portrayed my father.”  Most people have fuzzy childhood memories but Steven’s childhood recollection is distinct, even down to the details!  He says: “I remember things that happened when young, like how in the mv my father slaps me when in real life he canned me with a rattan, and how the si-nai (neighbor) calls me an ill-bred; that actually happened too.” The actual event was during one mid-autumn festival when Steven was about five years old. In the incident, the neighbor’s child tossed his/her burned lantern into a trash can which Steven later picked up to play. When the neighbor saw that she scolded him for being an ill-bred with no manners and even scolded his mother who was there!

An almost forty-year-old incident but Steven still remembers it, and what’s more, even had it filmed into mv.  But Steven denies holding a grudge, he smiles and says: “I’m not being vengeful; that si-nai is not even here anymore.  I’m not angry at her but that I want people to know that “ill-bred”『無家教』*, this term is very extreme. I myself think my whole family is well bred with good manners. In the mv when the si-nai scolds Chun Jai, I wanted Chun Jai to lift up his head and say: “What did you say!?”  Because at the time I was young so did not dare to talk back. This mv can say what I had wanted to say at the time. That’s the fun of creativity. The boy is indeed at fault and the si-na is not wrong to scold him but this matter has nothing to do with upbringing.( 家教). I hope people understand the denotation of “upbringing”."

Even when young, Steven was well-behaved and dared not stepped out of line. The most reckless was climbing a hill without his parents' knowledge. When probed further, he says during high school he did 「擸嘢晒馬」**. He laughs and says: “At that time my Band 5 class (ie. Grade 11) had many dark-skin students. Most of them studied either carpentry or metal works, and they all owned a T-ruler, a spanner, a saw and a screwdriver etc. One time a classmate was “teased” by a group of boys from a neighboring school, He was beaten and had his money taken. We knew the boys hung out on this basketball court. So after school, still wearing our uniforms, some of us in our mighty bravado, equipped with our “tools” we rushed down to the basketball court in full force. Very thankful the fight did not pan out because a classmate knew them and so seeing we were all friends, we let it go. Had the fight took place, some could have been beaten to death. That’s the naughtiest stuff I did when young. After that I didn’t dare participate in this kind of activity.”

Decent by nature, Steven did not go astray all because of his late mother’s teaching. But after her passing Steven suffered a mood disorder, and from 2000 thru 2003 he had had thoughts of committing suicide.  Steven recalls: “There was a time when I felt lost because prior (to his mother’s death) I had my whole energy and spirit put into taking care of mother. With her gone, my spiritual pillar simply crumbled. Even though I’m fine now, there’s still a lingering shadow such as the house phone ringing, or the knocking on the door. They all evoke memories of my mother’s situations; so very scared the phone ringing was the hospital calling, and also recall my father knocking on my bedroom door telling me that mother had taken a turn for the worse and had to be rushed to the emergency in the hospital. So now there is no phone installed inside my house and family members will not knock on my bedroom door.”Steven is glad he did not commit suicide then, and now that he is a Christian, there is even less chance of him taking his own life; he still has to take care of his father and family!

Steven and his red wine business girlfriend, Xu Hui Ling (許慧玲), have been in a relationship for many years.  Towards their relationship Steven says: Before, we had plans to get married but in the past two years of frequent breaking up and getting back together, everything becomes unstable.  Don’t know what’s missing.  I can only say that she is an important part of my life. What’s in the future, I dare not say. (Not your marriage partner?)  “We don’t know, let fate decide la.”   He says his father never urges him to get married.  Steven smiles and says: “He doesn't have to say it.  I know he really wants to drink the daughter-in-law’s tea and to hold his grandchild in his arms, but he never vocally speaks up. He will not give me pressure. Filial piety can only go so far, I can’t suddenly get married just so father will not worry."

Although the timing for marriage has not arrived yet, Steven has already contemplated on how to be a good father.  Looking much like a kindly father, he says: “Even though we weren't rich when young but we had love aplenty. We were very close-knitted; seldom argued or fought over money or be suspicious of each other. Our parents did not especially teach us that, rather they taught by example. How parents treat their own parents, their children will in turn treat them as such.”

Steven laughs and says he is all talk only.  He say: “All talk only, when time comes to teach my child I bet I would become a putty dough. I enjoy talking with young children. I may look strict when talking but not necessarily be able to enforce.” Strict verbally but actually a kindly father.  He pauses and says laughingly that the chance of ‘mommy’ being the villain is higher. “Will have to see how naughty the bb is. I won’t carelessly spoil the child.  When young, should undergo some adversity, have a simple life; these I think I will pay attention to. I won’t force the child’s growth. I believe moral conduct development is more important than academic knowledge development. My father never demanded my grades to be at certain levels only that I should be well grounded."


*『無家教』= parents did not educate child in good manners and propriety therefore child is ill-bred.
**擸嘢晒馬 = I've no idea what the phrase means.