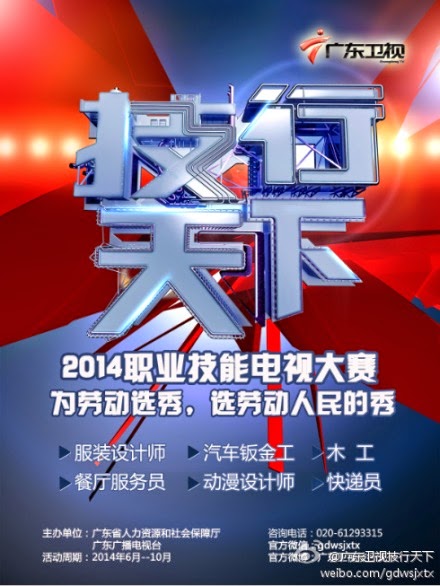 Steven is one of the 3 celebrity judges in a mainland reality show 《技行天下- season 3》 produced by Guangdong Satellite TV channel currently.  The theme for this season is "From the masses to the masses" (从群众中来，到群众中去) highlighting  vocational jobs. The jobs  chosen for this season are: 1) fashion designer,  2)automotive sheet metal worker, 3) carpenter, 4)restaurant waiter, 5)animation designer, and 6) courier. Contestants will compete against each other to win the title of being the best in their respective jobs. Tge show will air on Guangdong satellite tv station on September 14.


The gist of the show is that Steven and his fellow judges/examiners will visit each job site (together or separately (?)) to observe its operations in situ  at the same time interact with the contestants to better understand and appraise their  handiwork/products/performances.  Each time when the judges have completed their field observation of a particular job in hand, at an appointed time they and the involved contestants will meet up in the Guangdong tv satellite studio to film the awarding of the winner before a live audience.  As of July 24, the episode on the fashion designer competition is completed. (see pix)  1 done, 5 more episode to go. So, what's next?

~~July 14 2014 ~~
20 fans have already signed up to attend the 1st studio recording session of the show on July 24 in the Guangdong TV studio. Incidentally, a fashion designer praises Steven as a quick learner in using the sewing machine, and the outdated kind with feet pedal at that. The Beijing day 1&2 filming has completed, wonder where his next stop is?