Host, Ou Ge, welcomes everybody to the live recording of the show. He, however, disagrees with the public announcer's introduction of him as the most gossipy host (bagua) in the Chinese entertainment circle.  He says he can't even get in line for that title because as of this time at this very place the 'gossipiest' hosts are all gathered right there - points at his four junior hosts - Li Xiang, Lian Lian, Yu Sha Sha and Ma Xue Yang.  Applause! 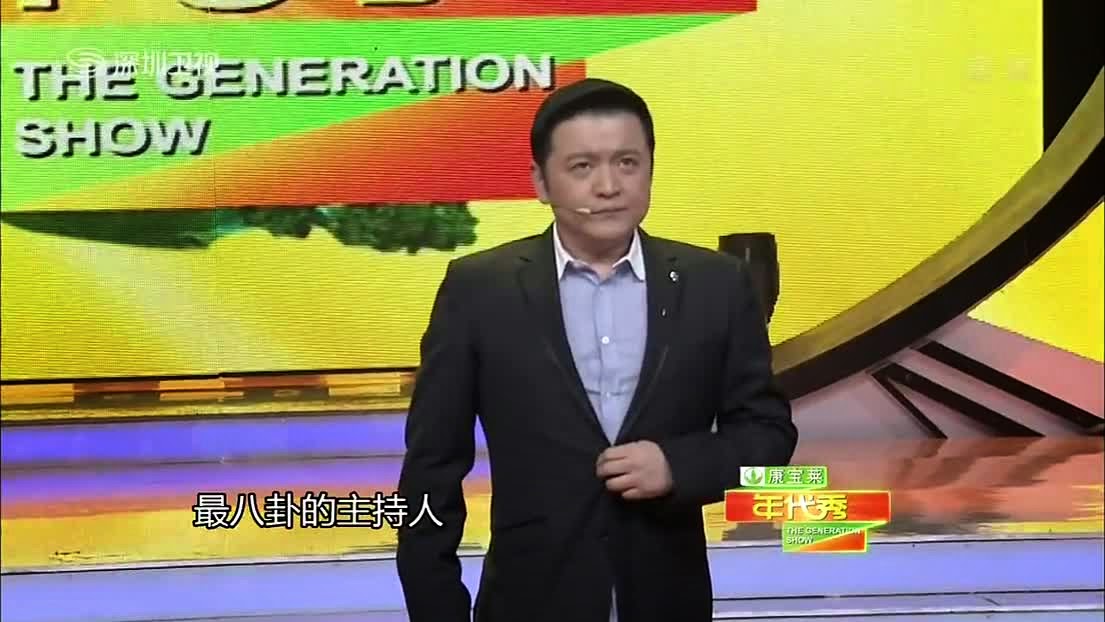 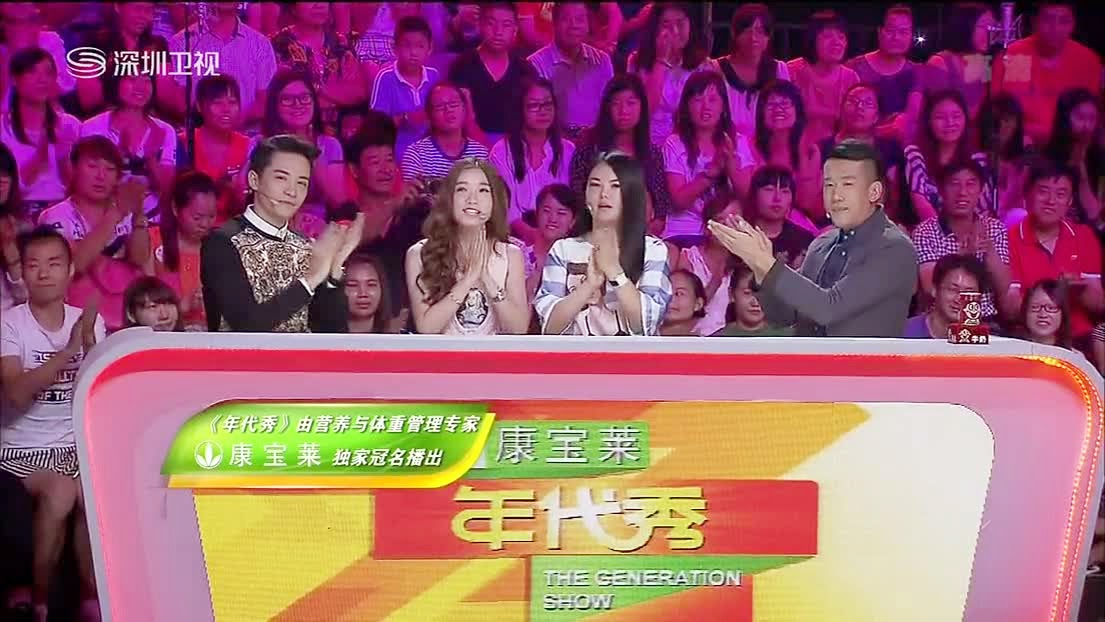 Li Xiang frankly admits she especially loves reading the daily gossipy tabloids. Ou Ge reveals that Li Xiang's daughter, Angela, is currently filming a tv series in Hong Kong as a PA (production assistant).  Ou Ge then turns his attention to Ma Xue Yang, who reveals that he is currently filming a new drama with co-host, Sha Sha.  A still of their scene is shown on screen, Ou Ge asks if he (Ma) is filming a drama with Sha Sha or is he in fact being molested by her.  (Pun on xi) Lian Lian interjects he avenged Ma when he later mugged Sha Sha with a knife to her throat - "I just want money, not life - give me your money!".  Lian Lian, the mugger, is disgusted to find just 16 yuan inside his victim's empty handbag. He disgustedly berates her for being penniless, and just as he walks away the hitherto terrified victim unexpectedly yells at him, stopping him in his track. "Who say I have no money? Who say?"  She indignantly takes out the money from various hiding places on her body, her shoes, her hat and her wig, and angrily throws the money at the mugger. In your face!! No money? Me? The scene brings a whole new meaning to indignant Pride cuts off nose to spite the face. Dare to call me poor, eh??  lol! And so abnormal the victim's reaction that the mugger flees in fright! That was such a brilliant hilarious intro to start off the show! haha!

Sha Sha is assigned to play hostess to the celebrity guests so for this episode it is Team Sha Sha, Ye Qing, Steven Ma and William Chan vs Team Lian Lian, Li Xian and Ma Xue Yang. Now viewed as "traitor",  Sha Sha's ex teammates deliberately 'blacken' her name: Though quick to seize question to answer, her brain is unfortunately not as quick, furthermore, she is quick with her mouth too. But Ye Qing is not scared off.  Next, the introduction of the male guests: Steven Ma, William Chan. 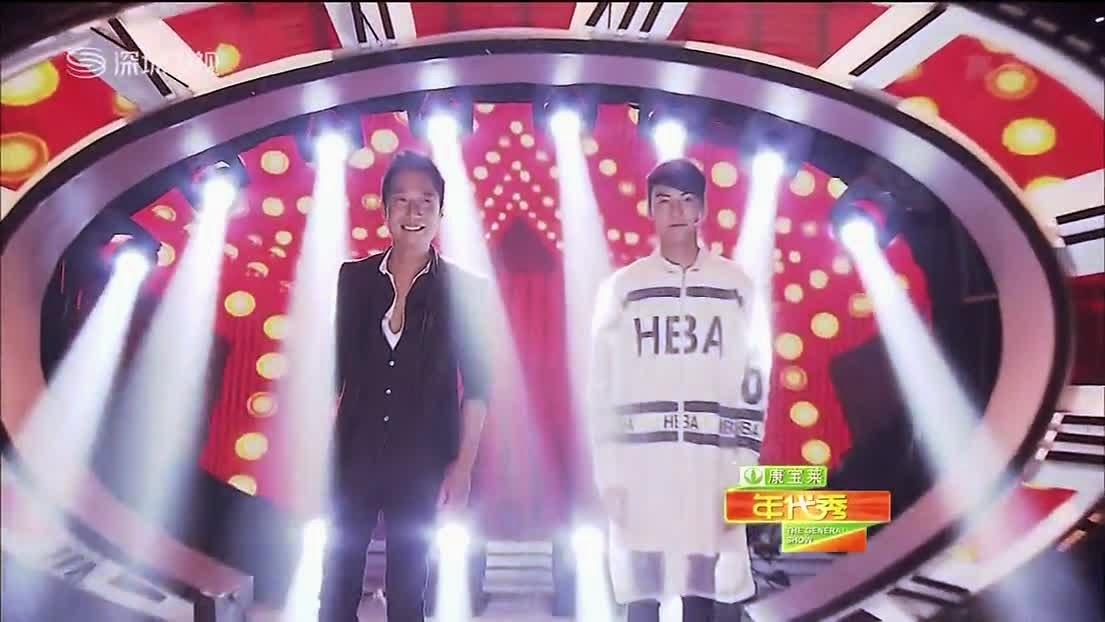 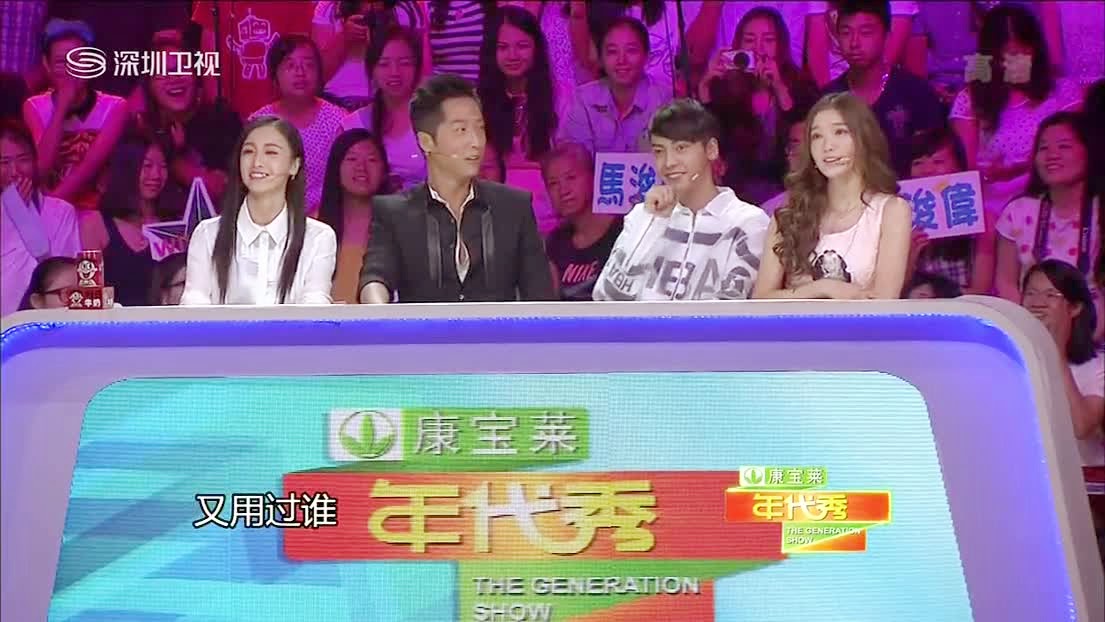 Thus, the two teams are assembled on stage for a head to head matchup.  Sha Sha tantalizes the audience that she has 'used' one of her males guests --William-- as in filming collaboration.  Steven is asked if he had been 'used' by Shasha? Steven says he doesn't know how she would use him. Shasha says she really would like to 'use' him because he is a tv series rating guarantee champion. "Whenever TVB airs his series, it's ratings are exceptionally good!" Host: "Right, Steven Ma is a rating fortune general !"   Woah, syrupy thick, eh? Way to stroke his ego! 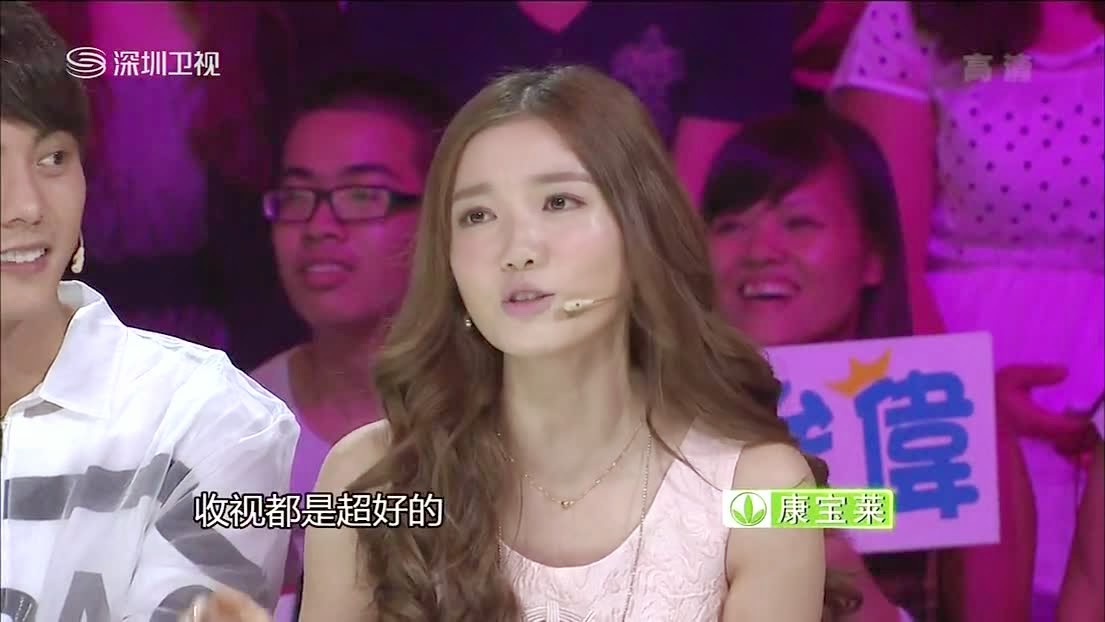 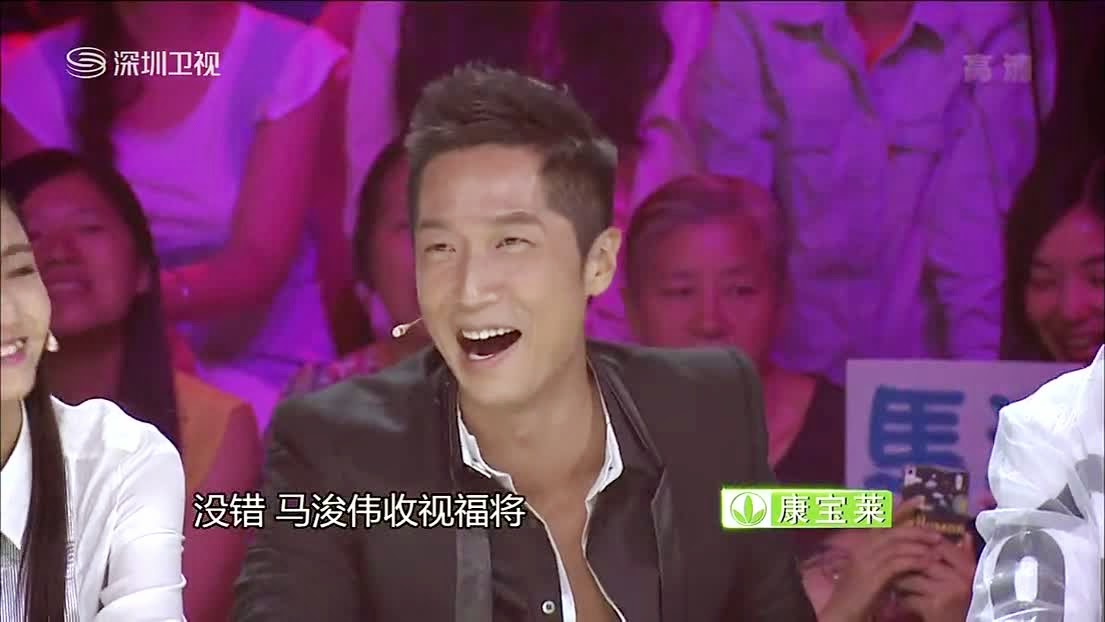 Screen shows Steven's past 3 tvb series; all ancient period: Duke of Mt. Deer 1988; Where the Legend Begins, and Perish in the name of Love.  Host says Steven's look is most appropriate for ancient period drama. Steven says for both ancient and Republican periods. Probably because of his single-lidded small eyes, and relatively high nose. Steven says many partners told him that he looked like their older brothers; many fathers & mothers told him that he looked like their sons, and also many girls/women told him that he looked like their younger brothers. Shasha: (Steven) "gives off a familiarity vibe."  Moving along; Ou Ge says Steven not only acted but also sang the theme songs for many of his series too. He requests Steven to spontaneously sing a cappella in situ, which Steven is more than happy to oblige. Alert: Sharp-eyed weiboans are quick to point out William's fanlike adoring gaze at Steven's every movement throughout the whole show.  lol!  weibo 9月28日 10:13 9月28日 23:51

Ou Ge next introduces Ye Qing, whose series include Bu Bu Jing Xin and 绣春刀.  Ou Ge: "And now moving on to the next male god, William, you've been here for the 2nd time, so how does it feel?"  William: "Even closer to Shasha now."  (Editing?)  Anyway, William and Shasha get to show off their flying daggers scene/spoof.  They are enemies seeking revenge - Shasha: Today, either I die or you die.  William: This person (Shasha) is most probably a sicko.  Finally, the leading man lets out a dying wail/squeak...ah...ah that turns into a haha laugh! 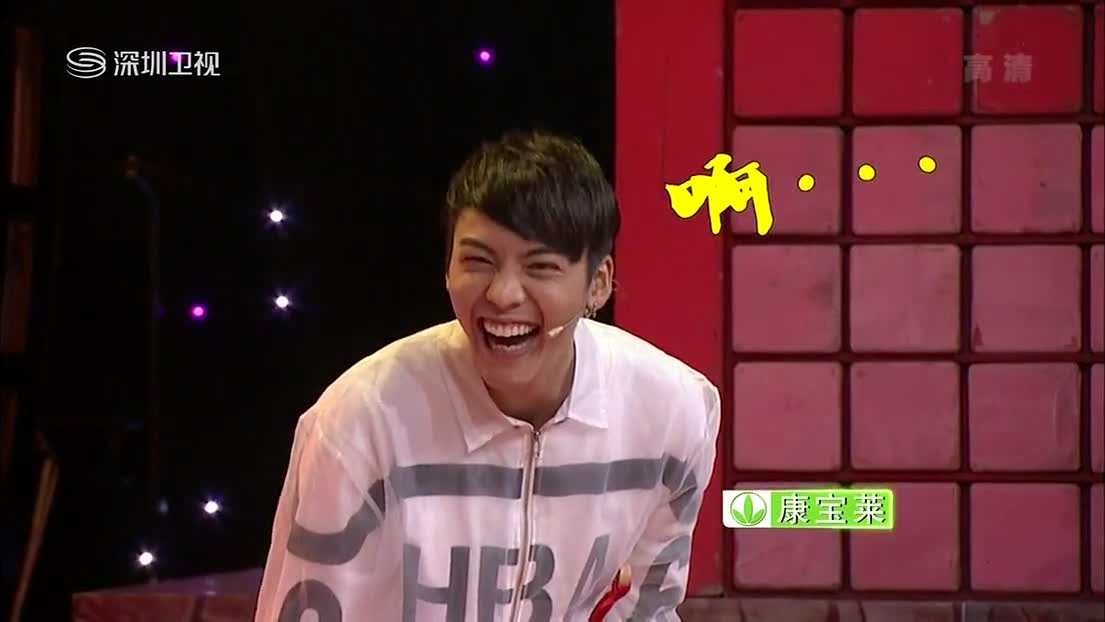 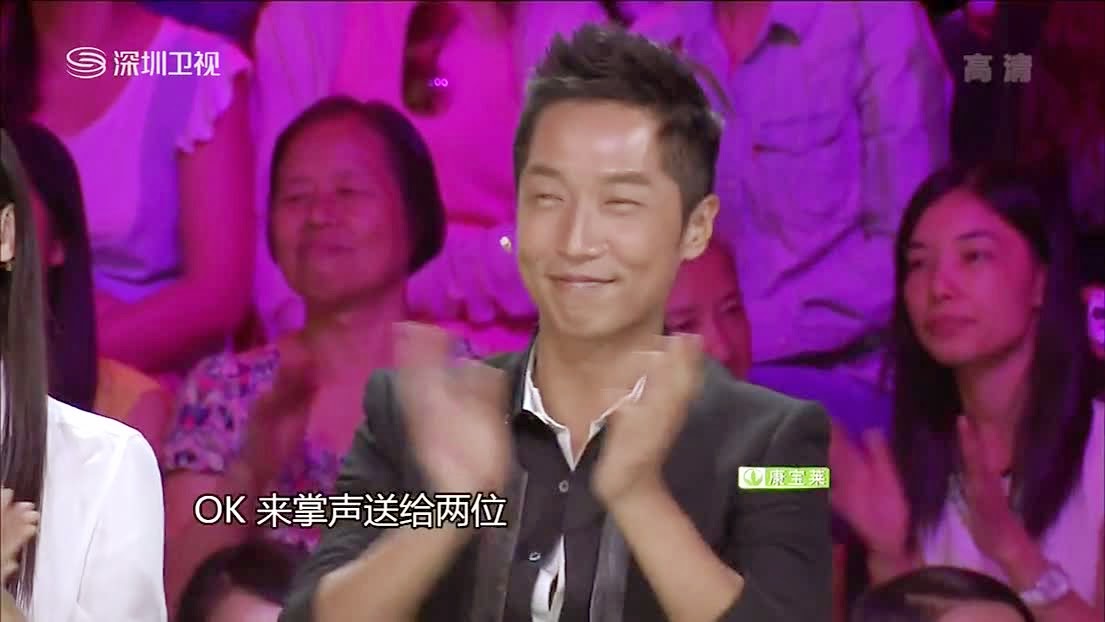 Steven seems to enjoy that skit. lol!
The following segment is for the participants to talk about their impression of Hengdian.

Hengdian
Shasha: Very scary at night.  Dark and empty of people, when suddenly you see someone dressed in an ancient period costume. Nerve wrecking!

Ou Ge says even more nerve wrecking is when at one time dressed in a Song Dynasty Emperor he had to go to the washroom, and made the mistake of declining a crew member's offer to physically show him the way. He thought he should be able to find the washroom himself, unaware of just how big the whole palace venue was. He walked for almost 10 minutes, all that time without seeing a soul in sight. And so there he was, holding up his pants wandering around, completely lost and alone in the dark palace.  Shasha: Just imagine how scared a person would be at seeing you then?

Lian Lian: Tourists everywhere - filming going on at this site, and there came this big group of tourists.  Ou Ge: And what's more, live recording during the filming, and suddenly the blaring of a megaphone (from the tourist guide)  Lian Lian: See who's there? William Chan!

Li Xiang: Because of the large presence of celebrities, businesses operated by crew or staff members or other entrepreneurs quickly sprouted. For instance, like this one tiny massage parlour, its wall is pasted with many celebrities' photos. To show support for their colleagues turned business owners, celebrities help promote the businesses via weibo posting.

Steven: Two deep impressions: 1) Lots of bald men. (Huh? Say what?) Because a lot of Qing Dynasty dramas 2) If stay long enough in Hengdian, you will sure to know of this one place - which is Yi Wu. 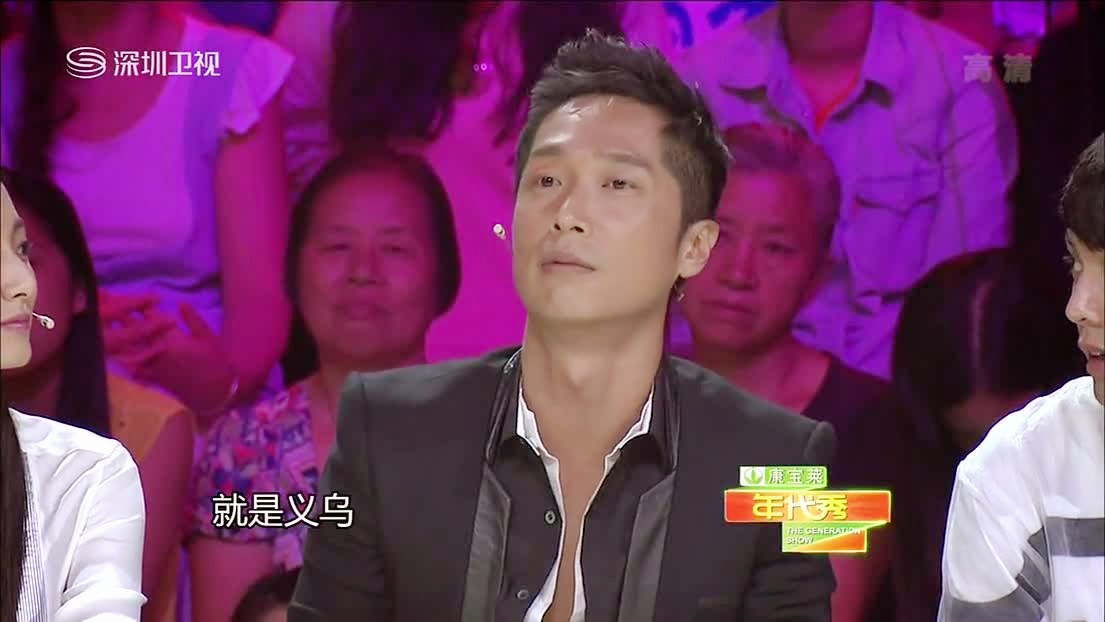 which is Yi Wu
What a deceptive screen shot! Steven's facial expression is so incongruous with his innocuous remark, with team mates hanging onto his every word. That's what I call --  stage presence.

Lian Lian: Also, the locals are so used to seeing celebrities in Hengdian that they take the stars’ presence in stride.

William: At one time I stayed in Hengdian for 7 months filming two movies consecutively. I even stayed in the same room in the same hotel for that duration. Going stir-crazy!

Li Xiang: Look up friends there because there are many filming troupes gathered there. Friends that you normally don’t have time to get together you will see them in Hengdian.  Shasha: Thus, Hengdian is also dubbed Heng Nation.

Yes, indeed Hengdian is like a small size nation especially existed to pamper  their visitors and cater to their needs and desires, and one such service is custom made clothings specialty. Thus, Ou Ge skillfully steers the discussion to the show’s next question:

Q: Among these 3 stars (Andy Lau’s military style knee-length down winter coat, Stephen Chow’s Tang white tunic, Faye Wang’s white down winter coat), which of their clothes was custom made in Hengdian?

Show and Tell Treasures segment
Ou Ge asks what are the pastimes there?   Of course, Steven blurts out-play badminton.  Before he set out for Hengdian he found out that there is a 10-court badminton venue.  William also patronized the badminton court during his stay as well as the gym to exercise every day with colleagues.  Shasha likes to go treasure hunting, and among her many treasures is a pair of boots custom made to look like Chinese black canvas shoes with white socks.  The boots keep her feet warm which a long winter coat can't.

Next, William shows off his ‘treasures’ – a pink Hello Kitty battery charger and a mini battery operated fan.  Ye Qing shows off her battery operated misting fan that can also use as a fragrance dispenser.  And then it’s Steven’s turn to show off his treasures -  mini fan,  mini lantern,  transformer water bottle (bought that bottle 14 years ago), and pencil case. (ref) Ou Ge says indeed that lantern would have come in very handy when he was blindly searching for the washroom that night.

Q: Among the brands, which is Hengdian's own local brand? A-de yi bao

TVB's props segment
- Steven says the effluent house is but a front facade located on TVB City period   street. Behind the facade is a period village called the Buffalo Family village, so small in size a few mincing steps would cover the whole area.  And just beyond is a palace on the same location.

Q: What is in the back of the palace? video link
Li Xiang defers to Steven to answer this question.  Steven says it contains an airplane prop, and right he is. He clarifies that "Triumph in the Skies" was not filmed inside the airplane prop but in an actual airplane at an actual airport. This airplane prop was part of an airline training equipment that TVB purchased. It's very hot and stuffy inside the plane because there's no air-conditioner, and also lots of mosquitoes.

Ou Ge says that whether TVB prop/equipment designers, or setting designers or choreographers, they all know how to make the best use of things, but then again this kind of props or settings recycling situation is very common elsewhere too, for instance, in the grand CCTV New Year Show.

Of all the recycled props, the prop that is most prolific on screen is none other than the red rooster bowl.  So, what do you call this bowl? Steven: It's rooster/cock (公鸡) bowl. Ou Ge: Correction, it's ji gong (鸡公) bowl. If it is a rooster bowl then what is a 'hen' bowl?  Steven: You're right! Gai Gong (Cantonese) bowl. lol! video clip

Ou Ge says this bowl transcends all dynasties in China, appearing in almost every dynasty including Tang, Song, Yuan, Ming and Qing, for more than 30 years now in TVB dramas. Steven affirms that he himself had used that kind of bowl many times also.

Q:  Why is Ji Gong bowl such a prolific prop in TVB series? C-its simple design and bright colors look good in camera.