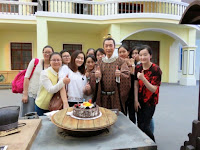 Today (10/26) is Steven Ma's 44th birthday.  As he has finished filming his new mainland tv series 《驚天岳雷》on location in Wuxi, he is able to celebrate his birthday in Hong Kong with family and friends. He says: "This year I won't be having a birthday party. Will only call up a few friends to eat out. Just have a quiet and pleasant birthday. Actually since early October, I've been receiving birthday greetings and wishes nonstop.  My mainland fans visited me at Wuxi Studio especially to celebrate my birthday with me. On  October 18 while at Zhuhai for a stage performance, another group of fans brought me a birthday cake.  I'm very happy to have received so many birthday wishes and presents. Thank you, everybody."

When asked about his birthday wish, he says with smile: "For the people around me to have good health and happiness. Don't want to see frequent natural or man-made catastrophes, or other horrific happenings."

Early this year while his apartment was being renovated, Steven had to live elsewhere for several months. When he returned to his newly renovated apartment and saw how neat and tidy his furniture and stuff looked, he, all of a sudden, felt the merit of the "5-Ss*".  He says: "A home does not have to be too opulent. Nowadays, I don't want complexity. Just want simplicity. Presently, I don't even want to hang any paintings on my walls.  I enjoy that uncluttered feel. When Susanna visited me, she wanted to get me something. I said no need. She insisted.  So, I finally told her to give me a tissue box cover.  A friend thought I didn't have enough kitchen knives, so wanted to give me a set. I needed that so I accepted.  I thank my friends for their thoughtfulness but I truly don't wish to accumulate unnecessary stuff. I've enough necessities." He prefers friends to give him either food items or items that can be used. He says:  "If truly want to give me a birthday present, then make a donation to a charitable organization and give me the donation receipt for keepsake. That's more meaningful."

When asked when he is going to marry and start a family, he says: "If you see, (him dating) then you'll see. If (you) don't see me with someone then that means I still haven't found one yet."

When asked as rumored, if he is going to film a TVB series early next year, he says, "TVB is my alma mater, if there's a suitable script I'm willing to film it. Presently, I don't have a contract with TVB. I'm a free agent, so any unit can approach me for collaboration. Other companies have contacted me too. I'll definitely consider their offer if the script and timing are suitable." 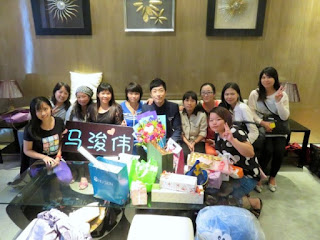 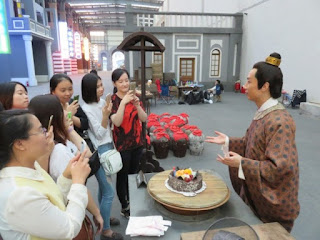 Note: In the past, SM baidu fans had made several donations to charities in his name. Steven was so touched when he found out about their kind deeds, and said as much on weibo.
--- link1