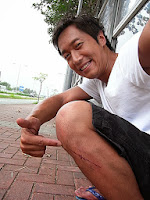 When filming "A Watchdog's Tale" there was this bicycle chasing scene. There was this 'cutting off' (sic. the car in front) on the shoulder lane action, with the mindset of wanting to act 'cool' (I) insisted on doing it. (sic. stunt) Outcome "car crash"; "cool' became "bruised" (Cantonese pun: humiliated).... but then a macho man (男人老狗) with one scar more, still "cool". 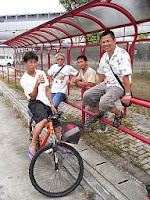