Steven Ma (Ma Zai) always exerts himself to the fullest because he knows a pair of eyes are watching. This pair of eyes belonged to someone he cares deeply—his ex-lover. March, this year, he and his red wine businesswoman girlfriend of six-years, Vivian, broke off their relationship. Ma Zai loves to drink red wine; that night he drank a lot. He had invited some friends over to his house for a drink and chat. However, the usual fragrant fine wine soon turned into a glass of bitterness; every sip tinged with melancholy. He sat dully in the living room, his hand holding the very wine glass that was used numerous times in the past sipping wine with his girlfriend; in a single gulp, he downed the glass of their favorite red wine. Sadness, regrets; a sound of “gu lu” and they were all slugged down. The Ma Zai of the tough Chew Chou guy mentality thought he could take them all in. However, suddenly, his heart twinged with pain and tears slowly rolled down. “I’m tired, I’m truly tired!” Recalling that pair of distant eyes, he yearned to get back into her favor, but was powerless to do so.

Ma Zai is a very punctual person. If have an appointment with him for dinner or for an interview, he maybe early but never late. Today he got there half an hour early, luckily I was there already. He even came prepared with 艇仔粥 congee and cheung fun. "If I was here early then I would use the time to eat, moreover, it wouldn't affect your work. Time is of essence to everybody. Unpunctual people are being selfish.”

When he sees the photographer walking with a limp, Ma Zai suddenly whips out a bottle of Yunnan Bak Yao spray, and bending down, spray it on him. Today is the first time they met but Ma Zai is always this warmhearted.

I have known Ma Zai for quite a while now; he has not changed much. He was always willing to talk about anything but his love relationship over which he was very tight lip. Even when occasional rumors of his so-called brokeback scandal erupted, he still was unwilling to make public his love relationship. Actually all in all, he has had but three girl friends: his first love was during his school days, whose run ended naturally; the one he met latter when he first entered society lasted 3 years. She is with another person now but the two still keep in touch.

As to the recently separated Vivian, she is a sommelier who also runs a red wine business; her family is very well off. Ma Zai disclosed that they met through a mutual friend and had dated for six years. Their relationship was not a secret among friends. When Ma Zai had dinners with friends, he often brought her along, too.

He once described her thus: "She’s younger than me by one year; I’m 37 years old. But she looks young and very cute. She’s not in the entertainment business; she’s in trade.” 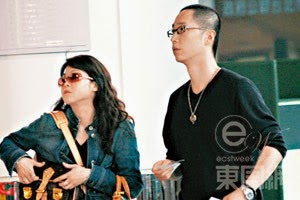 2006 Ma Zai and Vivian in Taiwan for vacation. Entering and leaving the hotel separately.

~~Could No Longer Stand the Inattentiveness~~
Everybody thought their relationship was stable so much so that they thought before long they could switch to addressing her as Mrs. Ma (ma tai); who knew they had already separated months earlier.

I stare at him, stunned, and did not utter a word. Ma Zai slowly softens up: "Before, I didn’t want to talk about her because I didn’t want her to be harassed by the press. Her family is in business. There was once this person who went to her father’s company demanding an interview, and caused them much inconveniences.”

What were the reasons for the break up?
Ma Zai, looking helpless, says: "The same old problems. She wanted me to spend more time with her, but I had to shoot series after series, each lasting 4 months. During this time, I didn’t even have enough time to sleep. Frankly speaking, I’m not the kind of person who can forgo sleep to be with the girlfriend. When I go to the studio, I don’t bring my cell phone along. During this time I can’t still be talking lovey-dovey, and then turn around and get into my character; I just can’t do it. When I was shooting a series, I couldn’t be with her. Dated 6 years but in actuality, probably only spent 2 years together in all.”

Like some elders say: “When a man’s aspiration is yet to be accomplished, either support him or leave him to seek out one’s own way of life.” Ma Zai’s career aspirations are still burning strong. He points out that actors’ golden period is between the ages of 35 and 45. “My passion for acting runs strong. I wish to direct next year.”

He would not give in, so could only ‘release’ girlfriend.
“She kept saying that I didn’t accompany her enough. She often traveled to Europe for business, occasionally taking trains cross country. She would always complain: “You’ve never taken a train ride with me.” I had to work, how could I accompany her? ”

Their break off happened when Ma Zai was in between series, thus intensifying the pain of separation. “So played badminton everyday lo. The best way to vent. There was this one week that I played for 7 days straight.”

On the surface Ma Zai was not tender enough, yet he says with utmost confidence: “When I fall in love with a woman most wholeheartedly without reservations, she will be very lucky indeed.” 「我死心塌地愛上一個女孩子，她是很有福氣的！」

He says he is faithful. “Two-timing. I’ve never done that. Those men with 3, 4 or 5 girlfriends, I really don’t get their kind of mindset.”

Request Ma Zai to share some pointers for the male readers on how to court a girlfriend. He laughs and says: “Giving little presents is very important. If can afford it, buy some expensive ones to better express your feelings. Every now and then, I gave presents to girlfriend; most time they did not come cheap either.”

Get in the kitchen to cook. A cozy dinner is a must for romance. Ma Zai’s culinary skill is excellent. Whenever friends gathered at his house, he always did the cooking. “Like if she loves to eat fish, then buy two and let her have the better one. She will be very happy for sure.”

Giving flowers is also a must. “For special occasions or festivals, I will give flowers. This is the basic.”

Ma Zai thinks that lovers besides passion must also have something in common, only then can their relationship lasts.

“My way of resolving problems is different from hers, our points of view are different, too. I often described her as 番書妹* and I’m the public housing grassroots, hence, both very different. But we also share a lot in common; the most basic is drinking red wine.”

Ma Zai says since becoming unattached again these past months, the initial heavy feelings have slowly ebbed. And now he feels carefree. But in an immediate turn around, he says maybe in two years’ time he can get back with Vivian again.

The usual Ma Zai who is full of life philosophy talk is more like a big boy when it comes to talk of love and romance. (談情說愛)

Ma Zai says Nip Ji Yuen in Sits with a black and white personality, and without grayness resembles him.

Ma Zai’s late mother when she was alive often furrowed her brow. Every time she frowned, Ma Zai would kiss her and then would say: “Mama, in my next life, I’ll still want to be your son.” Upon hearing this, Mama’s cancer ravaged face would soften and shine with lasting brightness. Mama has passed away almost ten years now, but Ma Zai has not remodeled her bedroom, still the same mattress and the same bedroom set.

Father Ma is even more attentive, always keeping his beloved wife’s bedroom neat and tidy, free of dust. His wife battled cancer for 20 odd years, and he was with her every step of the way. Although separated by eternity, he remains faithful. He had protected her, had been tolerant of her, and had never asked anything in return for himself. This kind of love, transcending life and death, transcending the length of a mortal life, in Ma Zai’s heart, this is the most perfect kind of love.

Mother Ma was a chronic patient who battled nose cancer for 20 odd years.

Father Ma was a bus driver in his younger days. During his days off he would take Ma Zai out to play. Now he frequently plays chess with old colleagues to pass the time. Ma Zai encourages him to find a life partner.


*students whose formal schooling used English as the medium of instruction.

Note: Sad to read that Steven is still holding on to his late mother's bedroom, which indicates he is still mourning and grieving his mother's death even after all these years. Hopefully one day his healing is complete and he can finally let his mother rest in peace in his mind and in his heart.

Edited: Don't know why, but reading this article brought to mind of this image of Ji Yuen holding onto a pole, drunk as a skunk. Heartbreaking.