part 5
大海探班
Around noon, Mazai’s morning work was about done; he said to us: “Treat you all to a noodle lunch. Come on!” I was slow to react, indecisive and not sure what to think - tian na! Is this for real? And also we felt sort of bad for imposing on him. bu hao yi shi - 不好意思的 So none of us moved as we stood rooted to where we were. This can’t be true, we thought to ourselves. Suddenly, someone (Ang Goh, the onsite recordinding technician) quipped: “Yo! You really going to follow him? (pointing at Mazai) Go then! 走啊 He’s so stingy; he won’t treat you all to lunch lah! You really believe him?” Of course we knew he was just teasing us. Mazai had gone to change clothes. I did not know that, so I went over there, and…haha! Luckily I have quick reflexes, I sensed something amiss so turned right back. Rather, brave Miss Ammy (should I use brave? or lascivious 好色?)stayed put and stared at Mazai for quite a while ne! From afar, we saw Mazai complained laughingly to Ammy: “Secretly taping me changing clothes ya, you! Luckily I’ve clothes underneath! “偷拍我换衣服啊你！还好我里面是穿的!”as he quickly whipped off his costume, briefly exposing a white undershirt, and just as swiftly put on a yellow winter coat, all done in a flash. And then he put on a “taken by surprise’ facial expression; his antics all captured by Ammy's camcorder.

Inside the filming compound was a cafeteria inside a small building. Saw Miss Kwok and her assistant having their lunch inside. Mazai greeted Ms. Kwok as we walked in. We had a table to ourselves and Mazai ordered a bowl of mushroom/meat noodle for himself; following his lead, we all ordered the same.

The service was very slow, but on the plus side, it gave us more time with Mazai. Mazai examined the snapshots in our cameras; my camcorder was not exempted either. To provoke Mazai, Ammy showed him one of the pictures taken on the first day. (Honestly, it was bad.) When Mazai saw it, he hollered: “Look so terrible la!” When he finished perusing the pictures in her camera, he quietly returned it to Ammy. Later Ammy asked: “You didn’t delete that picture, did you?” Mazai very calmly said: “Deleted already lah!” We thought he was just joking, but turned out, it was indeed deleted. Ammy didn’t know whether to laugh or be angry又气又好笑; this Mazai was truly bad 这个马仔太坏了 How can you delete a photo from my very own private collection? Mazai: “Wah! You made me look like a hog's head in the picture. No! even look worse than a hog's head. I worry you might use that picture as your wallpaper ya! If someone sees that, argh….. We all laughed uproariously. Mazai said: “How come their pictures turned out quite good?” (Ammy’s explanation” Ai!.. you can’t blame me ya! Who ask him to be still groggy from his nap and then had a bowl of 泡面 instant soup noodle? No wonder his face looked puffed up lo!)

We waited a long time for our food to arrive. Mazai yelled out: Lao Ban! We’re starving to death here!老板，我们饿死拉 and proceeded to act as if in pain. Very hilarious! When the food finally came, we all rushed to take pictures with him. I was first again! During that time, Steven even pretended to eat in slow motion to entertain us. When done, he uttered sheepishly: "So, wu liao!" (so silly!) 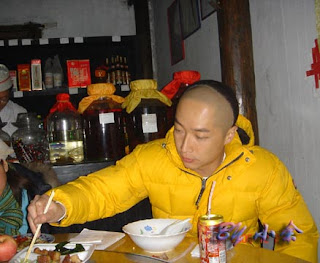 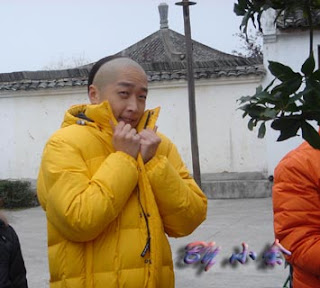 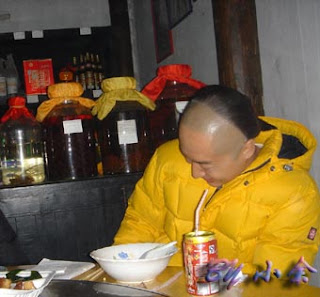