Despite Left Eye Injury Steven Ma Persisted Filming, Director Praises His Professionalism.
马浚伟拍戏左眼受伤 坚持拍摄被导演赞敬业
On May 20, Steven Ma while shooting a fighting scene for a mainland tv series, Yuan Yang Pei (鴛鴦佩) , in Hengdian got injured in the eye.  In the scene, he was singlehandedly fighting several martial artists when he unexpectedly got hit on the left eye with a prop hoe, the injury so painful his eye instantly teared up and shifted awry his contact lens inside his eye.  However, the on-site crew were unaware of the mishap. Meanwhile, not wanting to hinder the shooting progress, Steven, after hastily cleaning his hand with a wet wipe, dripped some eye drops into his eye to flush his contact lens, which he then removed from the eye, rinsed it with some eye solution and then put it right back on into his eye.  After a 10 minute or so break, he returned to position before the camera and was soon immersed in the scene. Later on, Director Wong Ka Fai posted a an entry on his weibo commending Steven's professionalism.

Steven expresses: "At the time, we were shooting a fighting scene. I singlehandedly had to fight with several martial artists.  In the brief chaos, one of the martial artists' prop hoe hit my left eye.  My contact lens instantly shifted awry causing the eye to tear up incessantly.  I understand it was just an accident. No one's to be blamed. Especially when shooting a fighting scene, injury is hard to avoid."

As to this mishap, Steven does not blame the martial artists at all, instead he speaks out for them: "It is quite common to get hurt during filming, especially during a fighting scene. Nobody wants accidents to happen. That's why an accident is an accident. They really did not want that to happen. But tonight, must treat it with ice.  Anyway, tomorrow it will swell up for sure

And Steven truly experienced because the next day his left eye did indeed swell up. The troupe supervisor was understanding so gave him a half day rest.  In the afternoon, back at work, Steven's eye still looked swollen. Steven smiled wryly and said: "Today for earlier half the day continued to apply ice on it. It's fine now.  Make-up will conceal it. Filming right now so I don't want the filming progress to be affected because of me. But, it's best that Director films the right side of my face,  more len jai (handsome) on that side. haha!"

In the past, Steven's eye was also injured when filming "The Change of Destiny" when a horse he was riding on unexpectedly reared up its head backwards and hit him smacked on his right eye.  So now, both his right and left eyes have been injured during filming. 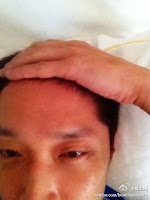