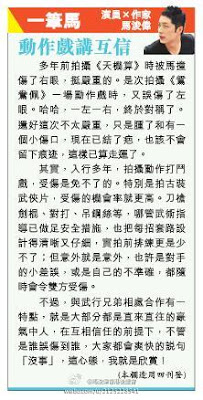 Many years ago when shooting "A Change of Destiny" my right eye was injured by a horse, and quite seriously, too.  And this time while shooting an action scene in "Yuan Yang Pei" (鴛鴦佩), my left eye got hurt.  Haha, one left one right, now finally a match.  Luckily this time it was not too serious, just a little bit swollen and a small cut that is now scabbed over, most probably will not leave a scar.  This is considered lucky already.

Actually, having been in this industry for many years now, getting injured while filming action scenes is inevitable.  Especially when filming ancient wuxia dramas, the injury rate is even higher.  Guns, knives, swords, staffs, face to face combat, or wire suspension etc.; even if the martial arts supervisor had beforehand implemented all the safety precautionary measures, and had also meticulously and carefully scrutinized the choreography of each and every action and movement, and had the action rehearsed numerous times prior to filming, but accident being accident will still happen; it maybe that the other party made a small mistake or that I myself miscalculate, either way one or both parties will inadvertently get hurt at any given time.

Anyway,  a collaboration with martial arts brothers has this one particular characteristic, which is, the majority of them are straight-shooters, and under the premise of mutual trust, regardless of who accidentally injured who, they will all without hesitation utter "No problem" (沒事); this kind of mindset, I truly appreciate.

related material yahoo blog Tribute to Stuntmen
Uploader & or translator: Tamaya at 10:28 AM