Note: Timer seems off in different replay, so I abandoned its tracking. 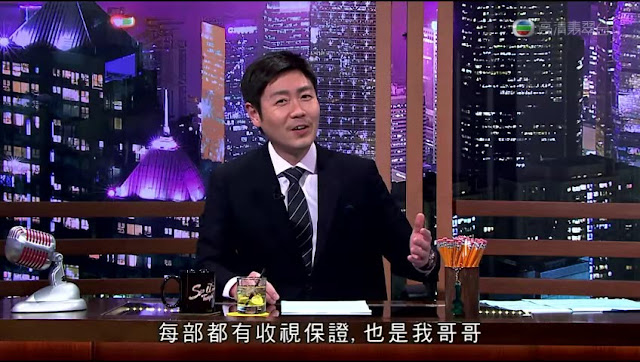 013 all are tv ratings guarantee. He’s also my brother 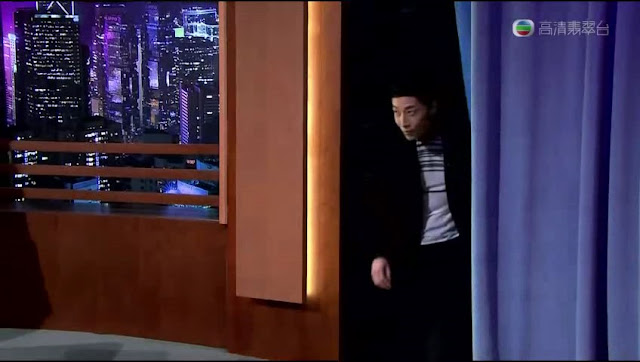 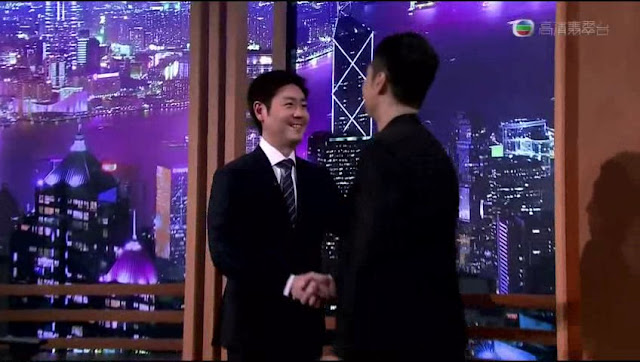 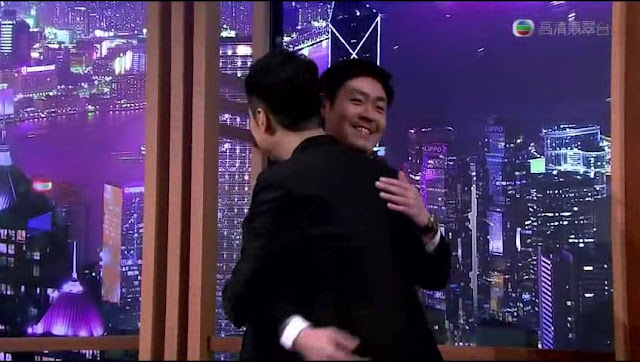 050  I want to ask u this first, you told me you’ve quit drinking

S: wei, wei, -We're so friend ya?  Revised script without telling the other person.
J: Because that series actually…
S: was a comedy
J: Not pure comedy but I revised it to become too much, I think
S: Too much ya? Some. (tn: Steven's slip of tongue) View from a certain angle. ‘Cause you were quirky, he did...At the time (tn: in the series) they were called “Juk, fun, ming fun.” He unexpectedly.. though a comedy it’s still an ancient period drama after all.  Out of nowhere he told “Juk, fun, ming fun.” to do Aaron Kwok’s dance moves
Hahaha!

S: Well! Ok lo! I tried not to get angry. That series, we’re all adults so once accepted to film then must get it finished.

J: You tried rein in your anger. You gave me another chance.  In 2011, you and I filmed another series together.  It’s called “Link to Temptations” What’s more, we were together in every scene. I acted your younger brother, we portrayed brothers

S: Actually, I still hate you.  That still stays the same.  I want to emphasize this so that you can’t cut.

J: ..love and hate simultaneously. For sure, can cut. I can cut anything
S: Well then, you cut I leave now. Still cut?
J: Let’s talk about “Link”
S: In “Link” I felt that eh, first of all, you’re puncture.  – ‘cause I feel that as an artiste, punctuality is important. Next, I observed you acted appropriately to portray your character.  Your whole person… did not have the flamboyance from before. When you get to know a person gradually..

J: Our characters address each other Dai Dee and Sai Dee. You’re Dai Dee, I was Sai Dee. Till today, we still address each other that after so many years already. I hope you can quickly come back to film another series.  What do you all think? (tn: to the audience)

S: Collaborate with you again?

J: No lah, you hate me so much

S: This time I change

S: See how you would response

J: Though said hate me but actually in many aspects, I still don’t know you and vice versa.

S: does it include your romantic rumors?

J:  Included. Of the more sensitive stuff, I want to ask you. You can give simple answers, no need to be too direct.  I’ll ask you if you would or would not do certain things.  You can answer “Maybe” or “Never”  (tn: Johnson explains the meaning of these 2 English words in Cantonese.)

S: I know these two English words.
J: Good. But I still need to explain, right?
S: So, I communicate with you via this method?
J: Yes, yes.
J: The 1st question to ask Steven. Wait, let’s get the cards out first
Ok, the 1st question for Steven is, “Will you engage in an underground romantic relationship?”
Maybe? Why?

S: Not exactly a romantic relationship, should say, I think you’re among the few who know my close friendship. I don’t like, well just don’t like reveal them at all.

S: You don’t need to. You reveal them everyday 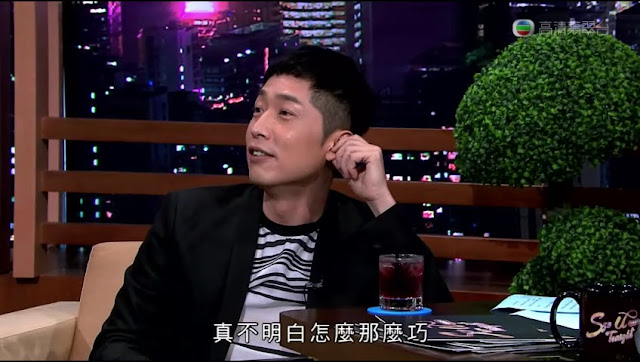 S: don’t understand why so fortuitously. Next time don’t go to crowded shopping area. Also, I want to warn you. You live next door to me. You.. 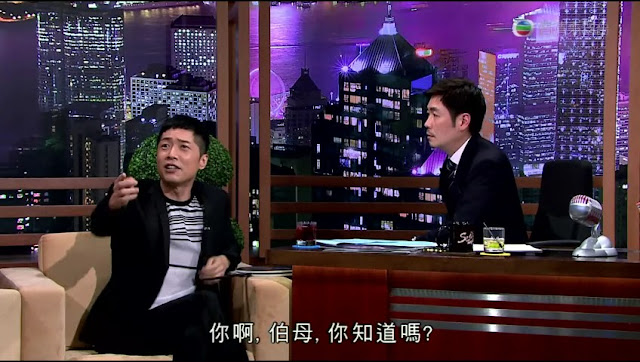 S: Auntie, do you know, there was this one period when he was often trailed (tn: by reporters) and I got dragged in. We live on the same street 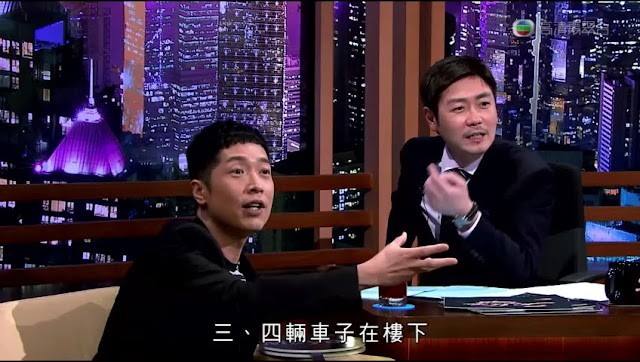 J: 3 or 4 cars waiting outside the building

S: Moreover, our street has only one entry/exit point. To get breaking news … what we called the puppy pack (paparazzi), their cars often stopped at the entrance to catch him. And me, I’m very healthy, only play ball (tn: badminton)   So nothing to take pictures of.  But he attracted numerous vehicles to wait outside and accidentally shot me. 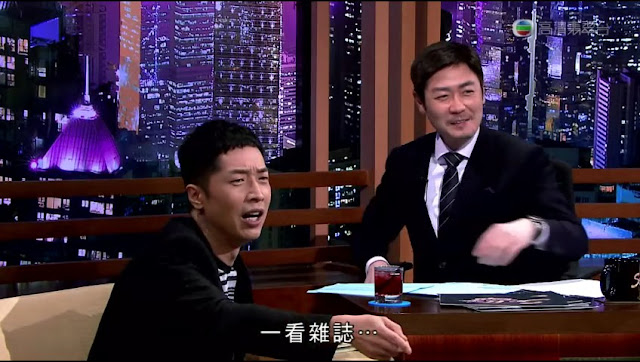 S: I’m talking about the camera.  So I thought to myself, no need to ask must be Johnson Lee. A glance at the tabloid,  haiz!, 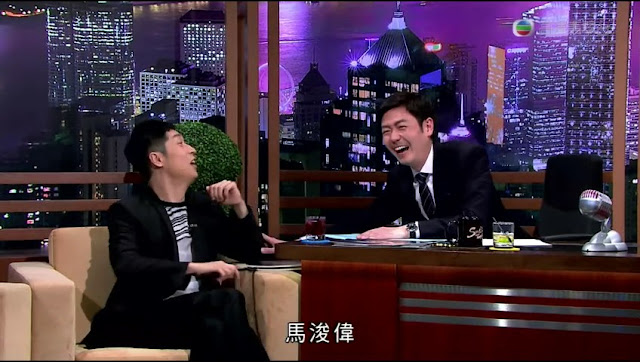 J: Do you know? One time there was this vehicle obviously trailing me. I approached it. I asked: “Who are you waiting for?”  You know what he said:  “Ma Chun Wai”!

S: Haiz!
J: I’m sorry! He of course would not say it’s me though obviously they were following me.

S: see!?
J: Would you fall in love with your co-star? Because when filming, seeing each other every day, would you?

S: Maybe. The artistes in the circle, if asked if ever have had a fleeting attraction, of course there was.  But whether succeeded in the pursuit, that’s another matter.   You’ll find the feelings (romantic) are peculiar, if follow that road, it’ll come to a natural closure, if got together then got together.

J: But you still need to pursue.

J: You tell me who, I’ll help you pursue her 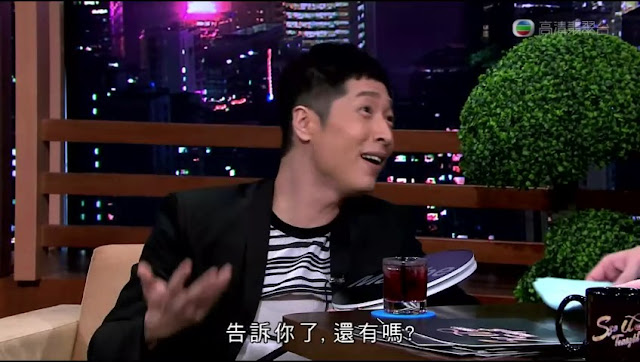 S: If I told you, would I still have the chance? Only you would be so brazen as to ask your big brother to introduce that person to you.  I tell you.  So those I loathe I’ll introduce them to him.  I’ve so, later I’ll whatapps you.

J: Would you cross over?

S: What do you mean by cross over?

J: meaning like filming a series with another tv station. Just an example

S: I feel that any artiste, singer or actor, you or Pao Goh, every one of us artistes, if another tv station wants to work with me, unless the script is really, I will not deny that I won’t. This is truth, I don’t want to lie.  But based on feelings, I’ll definitely give TVB the priority. That’s the truth.  Yee? Pao Goh, what’s the matter with you?

P: I’ll forever stay in TVB.  Living or dead, I stay with TVB.

J:  As a person, has to go with the times 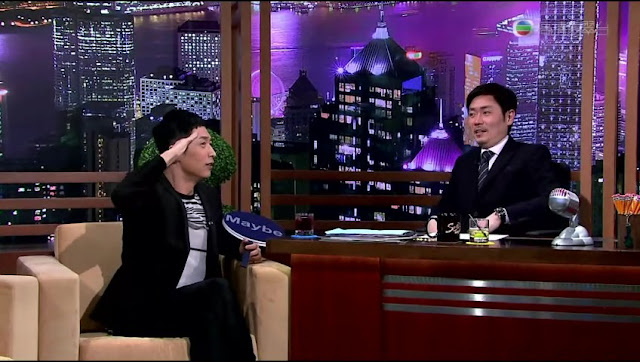 J: This is funny

S: If we learn English, one side is Never, “Never” means forever,

J: would never regret ever

S: “Maybe” means may regret. I wondering if there is a third answer 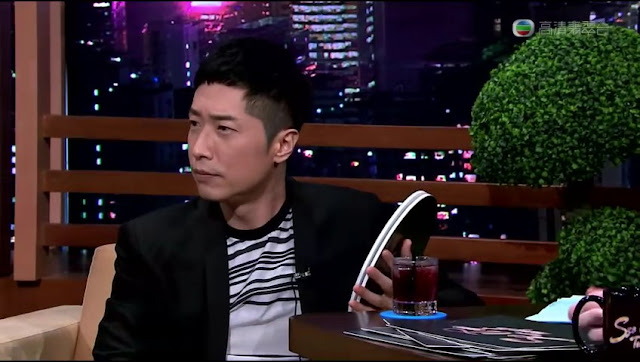 J: Go ahead and say it, it’s the last question anyway. How do you want to answer it?

S: Ever since I met you till now I’ve never stopped regretting. 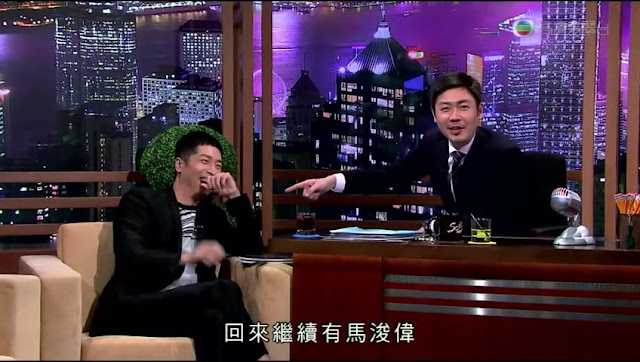 J:  When we come back, continue to have Steven Ma chat with us.  Don't leave.  Pao Goh, take it away!

J: We’re back. Continue to chat with Steven.  A few days I snapped a picture. That photo I want to ask you and everybody, let’s look at it. I felt that I looked a bit like you.  But of course, not as handsome as you.

J: See. Is there a bit of Steven Ma’s flavor?  resemble? 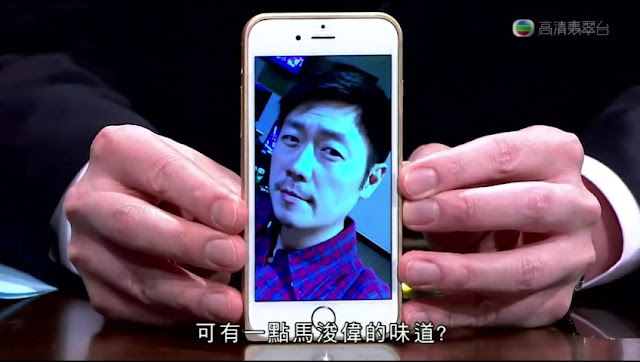 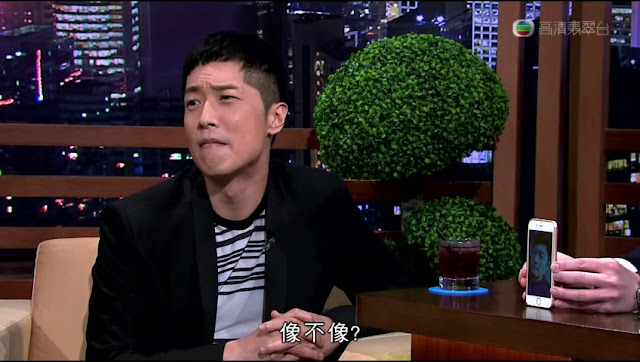 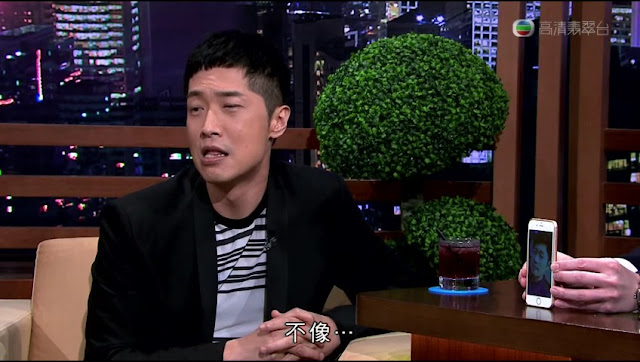 S: Actually if you want to attack me, no need to use this method

J: The charisma emanate from within

S: If I had the chance to re-learn, I learned this before but only for a short period then quit. Piano.

J: Yes, I also regret not learning to play the piano.

J: Before of this my mom scolded me until now. 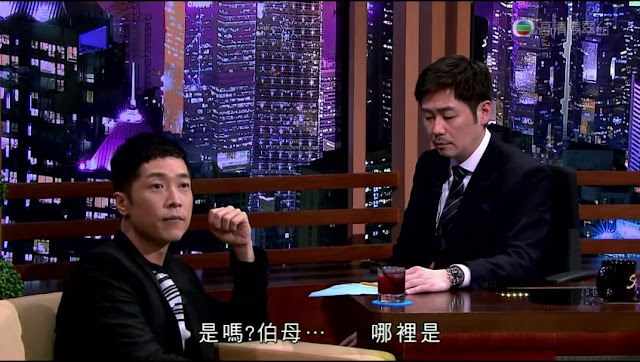 P:  You’ve already learned.  And acted on it.  Every night you “Kam” (climb on top) another person. (擒 rhymes with piano Kam) 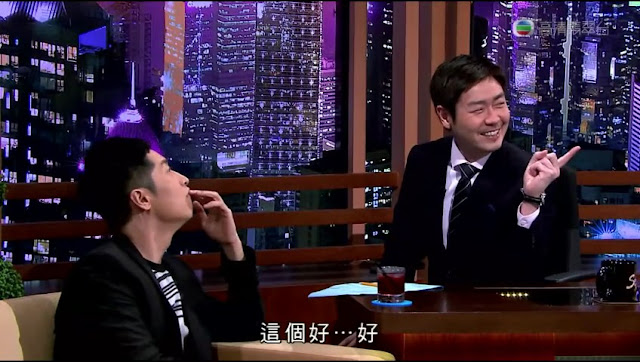 S: These days, TVB’s measurement is very good ma. (refer Pal’s salacious reference to kam). Can this really be broadcasted?

J: Some people dubbed you “The new generation warm guy”. What’s “warm 暖 guy” ?  What does it mean?

S: Oh, at the start of the year there was this particular magazine awards ceremony.

J: What? Are you a warm person?

S: Per their definition, “warm guy” means, according them, is that he cares about the people around him. Will…The exact description is..precisely. Anyway  to explain plainly, it’s whatever you’re not.

J: Yes. You and I, we are both grown-ups. Have you thought of having your own child?

J: Will you get married just to have kids?

S:  Can’t do that. Anyway, if married naturally will have kids.

J: What if that person is a compatible partner

S: If really want to have kids with her, still need to..

J: That woman is also compatible with you.

S: But naturally I won’t have babies with someone not compatible

J: No, your relationship is already stable. To have kids, will you tie the knot and marry her? 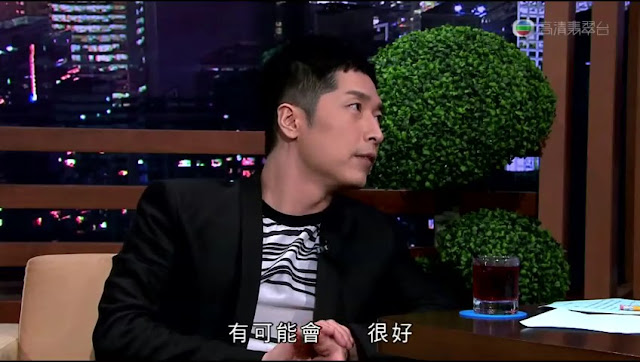 S: We’re all adults now. Men are ok, but the women.. you have to consider their age during pregnancy. If she is in the high risk pregnancy, it’s dangerous to her.  Right?  So, this situation has to be considered.

J: I know that besides badminton you also like.. last week when we talked on the phone you said: “Sai Dee, besides liking badminton I regain my interest in this. I asked what is it?  You said “I like to sing.”

J: Last week you told me recently you love to sing.

S: True, these past two years I’ve spent a lot of time on my singing.

J: So I very selfishly got hold of a mic. Hope you will sing impromptu for us all to listen to.  Ok? Also, very selfishly I will sing a duet with you, ok? I’d not sing with you for a long time now.

J: What we usually sang together. But you’ve to  accommodate me. You know I like to sing the 4 heavenly kings’ songs.

S: So you will for sure impersonate Andy Lau ba?

S: But can you use Lee Sze Zi’s tone to sing?

J: So, Dai Dee you finished your song, now it’s time to play a game with you. It’s related to your name

J: It’s time to play “pony race”. There are 4 symbols here, see whose horse runs the fastest. There are just 3 of us men, how about getting another person to play with us?

S: Kiu Bo Bo is not a woman

J: No, Kiu Bo Bo is to take charge of the horses’ position

P: Let’s find someone with less hair, with a pair of 96 inch legs

P: From now on, I won’t love you anymore

P: Because you kissed and hugged him

J: Do a darker shade on this side, would you? (lipstick) 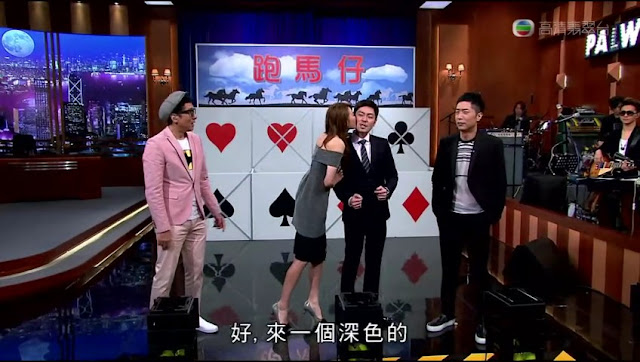 J: I’ll hold on to your hand 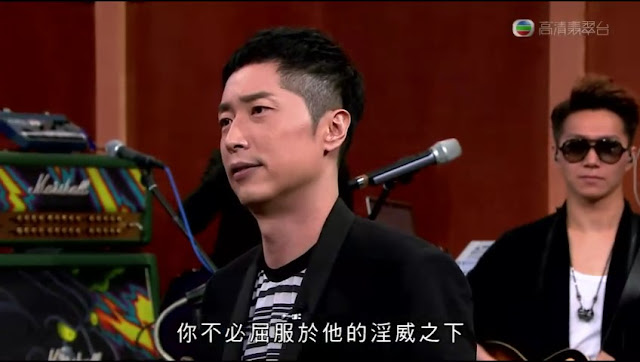 S: You don’t have to submit to his lewd threat

P: Are you under some drug influence? I know her colleagues. Did you drink any cough drug?

S: I like your song, Come Over”.  I often listened to it when I jogged

S: Ok Pao gor
P: One is like this, the other one is also like that, what’s with you?

P: Forget it. My wife is here today. Say it when my wife’s not here

SL: I appreciate you both.

J: The game is simple to play. You’re the black spade, I’m red heart, Shiga’s club and Pao Gor’s diamond.  Everybody has 4 balls. If toss ball into own symbol bin then horse advances on position, see whose reach the finish line first. But if toss into the X bin then back one position. See whose the fastest to reach the finish line. That’s it.

J: Yes. Do not pass the yellow line

S: What are you tossing?

They all got their balls into their bins, but Johnson came out the winner in the end.

J: Those with the red heart sticker will all get a prize.  How about this? Everybody in the audience will get a prize, ok?  Give away “ma zai” (snack) for everybody to eat.  Eat “mai zai” while watching the show, ok?  Let’s give Steven an applause.

J: We’ll be back with Candy Lo 盧巧音to sing for us. Don’t leave. Pao gor, thank you

RELATED MATERIAL: Sze you tonight with links to videos
Uploader & or translator: Tamaya at 2:20 PM