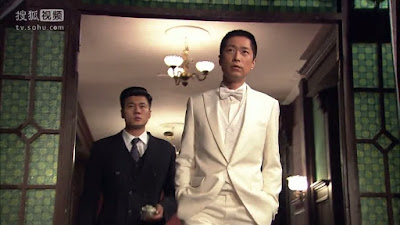 The attempted rape scene continues from last episode. Yong En's scream awakens Rui Fen, who apparently sleeps with full make-up on and wig.  She is startled by a disheveled Yong En walking into her bedroom. Seconds later, the nephew rushes in too. Ai Wen, awakened by the ruckus walks into the scene. She flashback to her earlier walking into her mother and her cousin's talking and instantly grasps her mother's evil plot.  Adding insult to injury, Rui Fen accuses Yong En of immoral behavior with her nephew, feeling wronged, Yong En exits.

Next scene
Yi Lan's birthday party. The upper crust who is somebody attends, including the 1st young master, Tang Ting Xuan (Steven Ma), representing his family.  Yay! Finally, he appears. Ting Xuan attends Song Li Lan's birthday bash as part of the upper crust society to show face to Li Lan's father's prominent position in society.The camera pans onto Ting Xuan as he, with hands in his pants' pockets, nonchalantly saunters in, all dressed in white. Ah, such haughtiness! At the door entrance, he pauses and poses for effect as the camera zooms in and out to showcase his appearance.  He beelines towards Mr. Song (Yi Lan's father) and pays his respect to him, accordingly.  Left on his own, he then unashamedly eavesdrops /overheard Qi Jun and Yi Lan's rather loud argument -  Yi Lan is mortified that after her expression of love to Qi Jun, the latter explicity tells her that he sees her only as a younger sister, that's all.  Naturally, no woman likes been told that by a man she loves.

*****************
Next scene
Ting Xuan receives the bank's phone call about his younger brother's blunder. He leaves the party, accidentally drops his wallet on the ground,  and just as he is straightening up from picking up his dropped wallet an incensed and humiliated Yi Lan runs smacks into him. After a brief exchange between them in which Ting Xuan retains his gentlemanly manners to Yi Lan's bratty attitude, the former gets into his car by the curb.

Just as he is about to drive off, Yi Lan, to escape Qi Jun, who rushes out to placate her, rashly hops into Ting Xuan's car and orders him to drive away, which he did, much amused. But when spoilt miss bratty Yi Lan wants him to drive her straight home, he refuses as he is on his way to take care of the bank debacle created earlier by his brother's, Ting Liang, incompetence.  So 2 choices for Yi Lan: either go with him to the bank and from there, home, or be dropped off now. She chooses the latter option.

next scene
Shen Residence.  Mr. Shen happily announces that Mr. Sun (Yi Lan's father) has pledged to donate money to their militia troop, with the undertanding that Yi Lan and Qi Jun would marry. But of course, Qi Jun disagrees.  And then Qi Jun drops a bombshell request on his father, he wants the broken betrothal back on. (haha!) Poor, poor father.  Mr. Shen explains to his son that his political position is precarious and he needs funds, lots of it, to support his army. But the modern man that he is, Qi Jun wants a marriage of love, not a marriage of convenience.

next scene :
Yong En leaves home the next morning.  Strolling down the street with his personal assistant/ henchman/right hand man, Ting Xuan listens to the good news that his various businesses are doing well, except for the theater business, whose owner still refuses to sell. Ting Xuan says to give the owner 3 days to consider while his business' worth keeps falling.  Then as fate would have it, Yi Lan at loose end drives her car down that very street and who should she see but Ting Xuan himself. She wilfully drives the car straight at him but didn't hit him. Recovered from his 'narrow escape'  Ting Xuan piles on his gentlemanly charm on Yi Lan.  He formally apologizes to Yi Lan for leaving her stranded on the road last time. Yi Lan accepts his apologies and invites him as tour guide and she drives them up a hill. After a look see around the area, she drives away, leaving Ting Xuan stranded on the mountain without a ride back. Tit for tat.

next scene:
Ting Xuan's father, Tang Ji, and his 2nd wife, Qin Yi, and their young daughter, Wei Ya, disembarked from the train after a long absence from home.  Mr. Tang did not inform his family in advance of their arrival.  Coincidentally, Mr. Jin (Yong En's father)who is also coming home from his trip happens to see them at the train station. Mr. Jin flashback - Turns out that Qin Yi is his former 1st wife.  He accuses Qin Yi of having an affair with Mr. Tang.  Tang Liang seeks out his mother (Mr. Tang's 1st wife) to express his grievances of being suppressed by Ting Xuan over the bank management. Mrs. Tang advises him to cooperate with his brother, as family unity is strength. Their talk is interrupted by Mr. Tang and family's unexpected homecoming. Apparently, Mr. Tang seldom came home and even if he did, his visits were all short.  Mr. Tang, 2nd wife, and Wei Yao (daughter) received joyous welcome from surprised family members after a 2 year absence.  Obviously, Ting Xuan is Wei Yao's favorite big brother.

Then the father sits down to have a talk with his two sons. He says there are two things -  firstly, he has come home for good, secondly, he is going to retire and hand over the family business for his two sons to take over. The sons are taken aback by his announced retirement and try in vain to persuade him to stay at the helm, guiding them. Mr. Tang says that he has been away too long from the workplace and his way of doing business is now outdated, anyway, all these the years they (sons) are the ones taking care of business, not him.  He has every confidence in their ability to take care of the business.  The sons can only listen to him and let him retire.

Then Mr. Tang redirects their conversation to another topic - that of Ting Xuan's marital status - that it is time for him to get married before establishing his career. That Ting Xuan is not young anymore, and asks if he has someone in mind.

Ting Xuan says he has not thought about it.  Moreover, he wants to firmly establish his career and does not want to be bothered with other stuff that may distract him from his career aspiration. His father disagrees. That he must have a wife so that he is more grounded, and not rudderless. Ting Xuan, not wanting to argue with his father, acquiesced.

next scene
Jin Residence
Rui Fen is informed of Qi Jun's visit to their home. Jumping to conclusion, she thought that Qi Jun has his eyes on Ai Wei but much to her later consternation, Qi Jun requests reinstatement of his betrothal to Yong En. To stall time and keep Qi Jun in the house so that Ai Wei can cosy up to him, Rui Fen pretends to fetch Yong En for him.

Meanwhile, Yong En goes to Qi Jun's residence to look for him. But of course, she does not know he is right now in her house looking for her. Yong En insists on waiting until he comes home no matter what.

Ai Wen tries to chat up Qi Jun and get him to notice her but in vain cos' his heart is on seeing Yong En. Finally after a long wait, Qi Jun decides to leave, and just so happens, Mr. Jin comes home but he is not in the mood to listen to Qi Jun's request to reinstate the betrothal. Turn out that Mr. Jin's trip was to arrange a marriage for Yong En from among his royalty relatives but all refused to see him because of his despondent situation.  Rui Fen tells him that Yong En has run away from home, without going into the details of the attempted rape, instead putting the blame on the broken betrothal.

next scene
Finally Qi Jun comes home.  He is ecstatic to find Yong En waiting for him there but she only feels her humiliation engulfing at recallig his breaking off their engagement.  Without saying a word. Yong En walks towards him and slaps his face real hard. She knocks the cup and saucer on the tabble over onto the floor, shattering them to pieces. Then enunciating each word, she says in a controlled voice that she came here to tell him that she is the one breaking off the engagement because she doesn't want to marry him. Hereafter, their relationship will be like the broken cup on the floor - no connection whatsoever.  (What a spunky girl. I like her!  Qi Jun is supposed to look stunned, but the actor's face is just so bland and impassive throughout the series.)  After her speech, Yong En picks up her luggage and walks off with as much dignity as she could muster. And then Qi Jun becomes all emotional and runs after her but loses sight of her in the busy streets. And then an accident happens that changes their lives forever.  Fate plays a joke on Qi Jun - unbeknownst to him there was another girl who dressed exactly like Yong En, and it is her who got killed in a freak accident.

Qi Jun sees an out of control car swerving to avoid a kid on the road hit Yong En's double into an alley, and as fate has it, set off the boxes of explosive kept there, and instantly set off a fiery explosion.

Revised summary write-up is based on the currently airing episode nationwide, which is slightly different from that aired on local tv stations, length-wise and story sequence wise.