Steven Ma, What’s The Time Over There?

The appointment was for 3 pm but Steven was already here by 2:45 pm.
He is often one step ahead of other people.
At age sixteen and a half he worked as a clerk in a publishing house.
At age 27 he moved his whole family from Sham Sui Po to a luxury home at Ho Man Tin.
Born in poverty, his way out & outlooks should have been gloomy, instead he shines brightly.
His mother battled cancer for 22 years; he had to beat time.
He toiled to get on stage, to stand under the limelight.
He founded a publishing company and owned a laundry shop.
Whatever he could do, he would do.
He shouldered everything himself, until like an oil lamp, the flame burned out.
He crashed and turned to drinking for solace, and suffered panic attacks.

“I thought I was strong, that I could take care of everything.”

Turn out, people should not only know to move forward,
but also to pace themselves for a long journey.
The road is winding and the nights, long.
But know this: the nights on this side of the earth are dawns on the other.

Steven moves fast, talks fast too. Within a few minutes, he is done with wardrobe, make-up, and now sits patiently for the interview to begin. He comes prepared, frequently earlier than his colleagues, which inevitably gives them pressure. Like earlier on when filming a Qing production, Sweetness in the Salt,  he was accused of being the male version of Wang Ah Jie (Liza Wang) with his multiple requests.  Actually, that wasn’t the first time it happened. A few years back, while filming the Change of Destiny with Benny Chan 陳浩民, he was rumored to have come up with a rule for fining latecomers for unpunctuality. Was he being too stringent?

“To shove the problem onto someone else is an easy way to shirk responsibility. Did I chastise someone for being late? Yes! But it’s not like I’ll scold you if you’re late for once. I feel everyone is allowed 3 strikes. But at the 4th strike, I will approach you, and face to face will ask you if you would please not be late anymore?

“I know people think I’m weird. Like what does other people’s work discipline got to with you? Time may change, but my set of principles will not change: be punctual, be responsible, and be grateful; and if these become old-fashioned, then let me be old-fashioned. I’ve been in this industry for 15 years. Even though, it’s tough to be a good person, and even though I’m like a bullseye target jabbed all over, but still those 15 years have come and passed, and I survive. Because ultimately, the entertainment industry is abundant with hardworking fellow colleagues.

“You think I didn’t know that some colleagues use the media to attack me? I know and I understand, but I’ll not do the same."

A man with high principles is a lonely man. But Steven is used to loneliness. “I’m a Chow Chew traditional man. When faced with problem, I will grit my teeth and bear it. When Steven was six years old, his mother was diagnosed with nose cancer. Only when he was a middle school student did he truly realize the scope of his mother’s pains. However, the more he empathized, the more helpless he felt. When sadness overwhelmed him, he would hide himself at a corner in his school, and cried. After which he would dry off his tears, and went home with a happy face. He did not want to add to his mother’s worries with his sadness.

Through the years, his mother’s cancer relapsed 3 times, destroying her senses of hearing, smelling and tasting.   “But she had never complained, and never gave up.”  His mother was a thin and fragile woman, but to Steven, she seemed like a giant. This wounded giant became his role model.

“During those years, I saw my father wholeheartedly taking care of my mother. I observed what an affectionate relationship was like. Recalling them, I believe there is such thing as everlasting, true love. I believe that happy and fulfilling marriages do exist.”

Steven’s father was a driver for No: 9 bus. He was the sole breadwinner for the whole family of seven. To lessen his father’s burden, Steven turned down his school offer to study designing in the science and engineering dept, upon his high school graduation.  “I was 16 and a half when I joined Long Man (朗文) publishing house as an office assistant. “

When his mother’s cancer relapsed, Steven had started his singing career. He vowed to give his mother a better life. He bought a luxury home at Ho Man Tin (何文田), and had his parents moved from a public housing single unit to a 1000 over square feet luxury home. He purchased the new home in July1999, but in the same month on the 21st, his mother passed away.

During the last month of her life, the cancer demon even took away her right eye’s vision and her ability to eat. So a tubing was surgically inserted into her stomach to feed her. Although the surgery was successful, his mother never woke up from it.

“I’ve always been strong. And thought that I could handle my emotions. But actually, I couldn’t.”

During his grieving period, his career took a sluggish turn, and then, there was the pressure of mortgage payments. He crashed.

“I’m never one to pour out my troubles to people, but I didn’t know how to take care of things then. I drank to drown my sorrows and to get high, and then I would sleep it off. But I suffered for it the very next day: hangover, ulcer, and intensified pressure.”

He depended on alcohol to relax himself, and pride himself on his ability to hold his liquor well. And that he has no cases of inebriation.

“When I was young, I felt very grown-up. And liked to act grown-up. Sometimes would drink with schoolmates. The only time I got drunk was when I was in middle school. Went to the park to guzzle beer with schoolmates. Only remembered drinking nonstop and woke up drunk on a street. Around 5 in the morning when I heard the traffic noise and people, only then did I collect my wits enough to go home. I used to work in a chemical company as a sales executive, which involved frequent trips to China. Those business entertainments required drinking, thus further boosting my liquor tolerance."

Thus, according to Steven, the peace he has now did not come easy. He likes to take risks, set up companies, operated a laundry shop, and founded a publishing company. He's not one for idling.

Years ago, his company, while undertaking the preparation of the concert, 輝黃演唱會, faced a liquidity crisis. It was cash strapped for an estimated HK$3 million. “Where can I come up with that much money in such a short time? I lay on bed, pondering. And finally came up with an “uncle” in Taiwan. When approached, he agreed unhesitatingly. I’m forever indebted to him. And the loan plus interest have since been paid off.”

His grief over his mom’s death, his anxiety over work; all these, he blithely brushed aside and affected a nonchalant front. Unwittingly, the more he put into his career, the more harm he piled onto himself. Until one day, his heartbeats sped up abnormally to about 150 beats per minute. He had to seek emergency care in the hospital. The diagnosis was an onslaught of a panic attacks. (TN: Recently, Steven was diagnosed with a congenital heart condition that causes abnormal heart palpitations. A surgery is required to permanently fix the problem. As such, his previously diagnosed “panic attacks” might have been due to his heart problem?) His doctor said his malady was due to his persistent suppression of his emotions. Once in Shanghai, he suffered an anxiety episode, so bad so that he requested a sick leave from the movie company; he was replaced by another actor.

“They were brought on by stress. Now, I know how to relax myself. I’m fine now. The spells have not recurred for a long time.”

He has been in the entertainment industry for 15 years; what he learned is that the life journey is long, to treasure the fleeting time, and to seize opportunities when available. His beginning was humble, but through hard work, he was able to surmount the social stratum. Since his formal schooling is limited; he has, for the past years, enrolled in a university taking up Chinese culture & history courses as independent study. However, what is more important is that he wishes to re-learn the arts of acting, starting afresh all the way back from square one.

“During my collaboration with Ken gor in AJCL, he pointed out that I lacked eye expressions, and so I practiced hard on expressing through my eyes. He said I was too self-conscious of being on stage as if under a spotlight, therefore, not absorbed enough in the character. Wayne Lai said my voice sound hollow / thin (錫聲), that real life voice would not sound that way, and that I should put more substance in my voice.

"15 years in this industry; this year is my start anew year.”

Male artistes do indeed have an advantage. Steven’s co-stars ranged from year past, such as Maggie Cheung to the present day, Linda Chung and Fala Chen. The fadans have changed a generation, but he remains a male-lead. The strength of a horse is said to be tested by the distance traveled, guess it applies here.

Time slips by stealthily. Come October this year, Steven will be 37 years old. Besides his rumored “Brokeback” relationship with his former manager, the only rumors he engendered were with Ada Choi, Sonija Kwok, and his wine business girlfriend, Hui Wai Ling.  His love life seems incredibly nonexistent, way too empty. A thirty something year old man – too virtuous or too unreal?

Nowadays, his contact with Sonija is limited to work only.
Steven has admired Ada but only as an artiste. He denies ever having a crush on her.
His rumors with red wine business woman, Hui Wai Ling, are at best, ambiguous.

I asked him if he admires Ada Choi.

“I’m not going to talk about this. But when you love somebody, you will be considerate of her/him. I’ve experienced having someone not pleased at seeing me; in this kind of situation, I think it’s best to remove myself from her sight.”

“But you said you’ve experienced it.”

I used to think that Steven’s life puzzle lacks a corner piece, love.
But, is his love life truly lacking a page?
Or is it a page concealed? 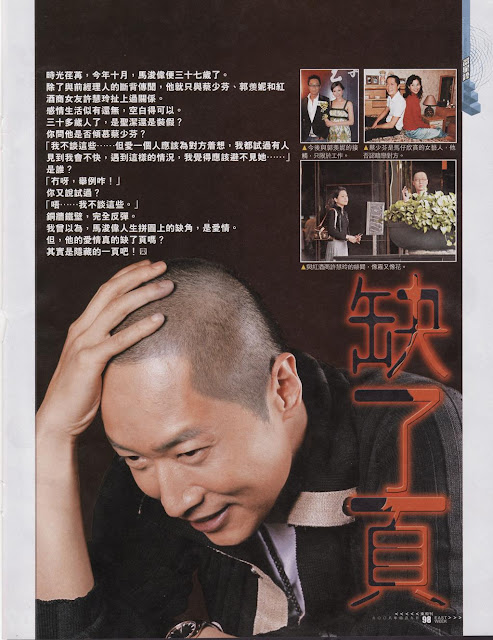 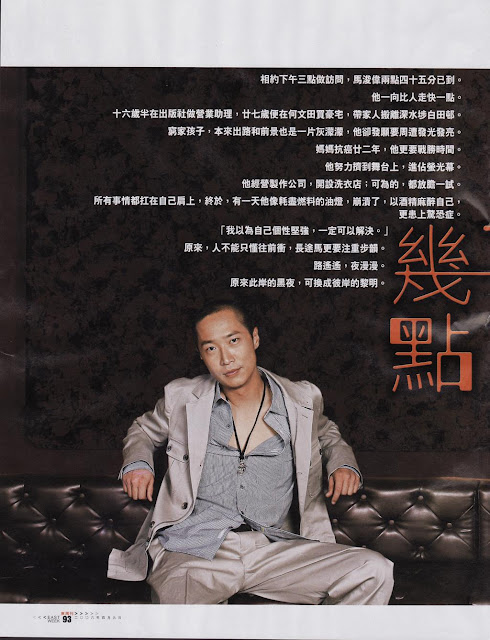 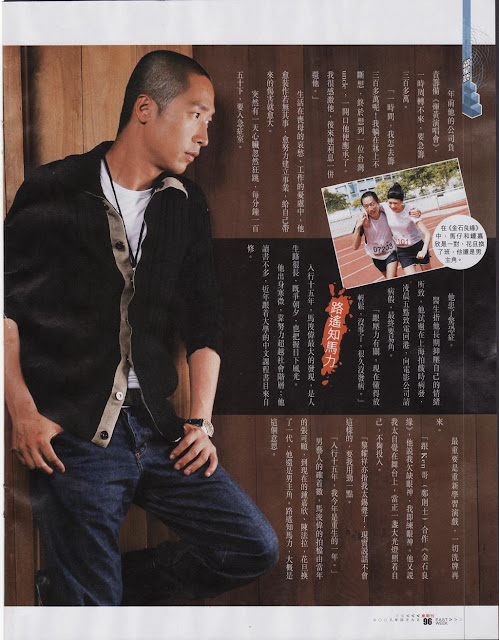 
The make-up artist for this pix here praised Steven's good skin
link to makeup artist's comment: Steven has excellent skin, so only a dusting of powder and concealer were applied, that's it.


Towards illness, Steven has deep thoughts. He was a victim of an illness "Panic Attack" four years ago. The symptoms of such an illness are sudden tightening of nerves, giddiness, freezing of limbs, trembling hands, breathing problems, abnormal heart palpitations. "The main cause comes from stress. If I cannot calm myself down or relax myself, and if I am always on the Get-Ready mode, the illness will relapse. These few months, I suffered relapses and once, I even had to stay home for 10 days. There was another time when I was posing for a magazine photoshot, my hand trembled nonstop suddenly and had to be rushed to the hospital."
Uploader & or translator: Tamaya at 7:57 PM