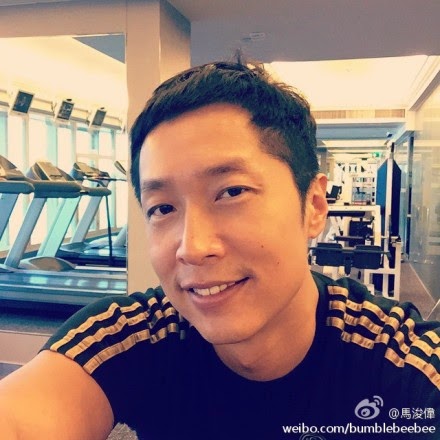 11月21日 15:00
I totally encourage everybody to exercise more to keep fit, but at the same time, I really enjoy the quietude inside an empty fitness room, so very contradictory ba, haha! 我非常鼓勵大家多做運動多健身，但又很喜歡健身室空無一人的寧靜感，很矛盾吧哈哈！


My commentary on Steven's contradictory traits

I first got an inkling of Steven's contradictory traits in this 1999 news report
Steven in real life has set high standards for himself. Whatever he does, it has to be done well. He says he has a dual personality. During the day under the bright sunlight, he is lively and outgoing. But come nightfall, under the darkened sky, he likes to be alone with his thoughts, quietly meditating on stuff.

Steven is a person of contrasts/contradictory traits  – he has a boyish look but possesses a deep, booming masculine voice. His looks changes constantly: in some pictures he looks youthful and boyish; in others, he looks haggard and older. His eyes sometimes single lidded, other times double lidded. His eye bags come and go. On screen he always presents a sunny and cheerful personality; in writings, he shows a more somber personality. On tv he is always surrounded by people or entertaining others; but in his writing he seems so solitary and very private, striving to look for equilibrium in his life. To me, Steven is most true to himself when he is writing. In his recent book, he left a piece of himself in it, generously inviting his readers to get to know him better.

1) Creative people have a great deal of physical energy, but they're also often quiet and at rest.

2) Creative people tend to be smart yet naive at the same time.

4) Creative people alternate between imagination and fantasy, and a rooted sense of reality.

5) Creative people tend to be both extroverted and introverted.

6) Creative people are humble and proud at the same time. It is remarkable to meet a famous person who you expect to be arrogant or supercilious, only to encounter self-deprecation and shyness instead.

8) Creative people are both rebellious and conservative. It is impossible to be creative without having first internalized an area of culture. [..]But the willingness to take risks, to break with the safety of tradition, is also necessary.

9) Most creative people are very passionate about their work, yet they can be extremely objective about it as well. Without the passion, we soon lose interest in a difficult task. Yet without being objective about it, our work is not very good and lacks credibility.

10) Creative people's openness and sensitivity often exposes them to suffering and pain, yet also to a great deal of enjoyment.

Yet when a person is working in the area of his of her expertise, worries and cares fall away, replaced by a sense of bliss. Perhaps the most important quality, the one that is most consistently present in all creative individuals, is the ability to enjoy the process of creation for its own sake.
Uploader & or translator: Tamaya at 12:28 PM